The Associated Press reports that 13,000 migrants are standing by on waiting lists to make asylum claims just south of the Mexican border with the United States.

“This is what has happened since the Trump administration placed asylum in a chokehold,” the writers for the Associated Press stated. More likely, this is the consequence of hundreds of thousands of mostly Central American migrants attempting to overwhelm the U.S. immigration system to make claims that are likely to be judged as non-substantiated, the acting director of U.S. Immigration and Customs Enforcement (ICE) told Breitbart News.

ICE Acting Director Matthew Albence told Breitbart News in an exclusive interview earlier this week that during the last several months, immigration judges working for the Department of Justice issued around 7,000 orders for removals for migrants making asylum claims. “Of the approximately 7,000 removal orders that have been issued over the past seven or eight months over 6,000 of them have been entered in absentia — meaning that the ‘family units’ didn’t even show up in court for their first hearing,” Director Albence stated. “Obviously, that called into question, the validity of their asylum claims.”

“These individuals are just gaming the system,” Albence continued.“They know they will get released, they will never show up (for their immigration hearing), and that we simply just don’t have the resources to go out and get that many of them in any sort of concerted fashion.”

Across the Mexican border, haphazard systems greet asylum seekers trying to get into the U.S. https://t.co/bi82UmPATW pic.twitter.com/Dh7J2tvm83

In an article written for Breitbart News, Kansas’ Former Secretary of State Kris W. Kobach wrote, “We are providing huge incentives for migrants to enter illegally and walk up to Border Patrol agents to demand a ride to the Border Patrol stations so they can make what is likely a bogus asylum claim. We know the claims are likely to be bogus, because the overwhelming majority of these migrants are denied asylum when their hearings eventually occur.”

Despite this, the Associated Press reports that 13,000 migrants are camped out in eight Mexican border communities waiting for their opportunity to enter the U.S. and make a claim for asylum. The largest numbers are in shelters in Tijuana (4,800) and Ciudad Juarez (4,500). The remainder are scattered by the hundreds in Mexicali, San Luis Rio Colorado, Nogales, Piedras Negras, Reynosa, and Matamoros, the AP stated. 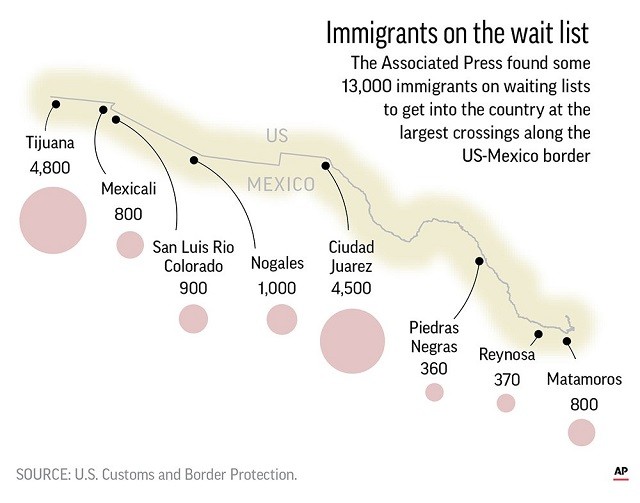 AP chart showing the numbers of migrants waiting in Mexican border communities to cross into the U.S. for a chance to claim asylum.

U.S. Customs and Border Protection officers are only allowing a certain number of migrants to legally cross through ports of entry each day to make asylum claims, the AP reported. A lawsuit against the U.S. claims officials are violating federal and international law by not allowing all asylum seekers to immediately cross, the news organization reported. U.S. officials say they are bound by processing and detention capacity.

“It’s not turning people away, it’s asking them to wait,” Acting Homeland Security Secretary Kevin McAleenan said while serving as the commissioner of U.S. Customs and Border Protection last October.

Thousand of the migrants are apparently making the decision not to wait and cross illegally instead. This can result in deadly consequences for those migrant families, the AP stated. The news organization cites an incident involving a Honduran family attempting to cross the Rio Grande near Eagle Pass, Texas.

A raft being utilized by human smugglers to ferry migrants across the river capsized, tossing all of the occupants, including a 10-month-old infant, into the swiftly moving water, Breitbart News reported. The infant drowned and others are missing and feared dead.

The acting ICE director said that this problem of Central American migrant families coming to the U.S. to make these asylum claims can be stopped immediately if Congress would take action. Specifically, he said that Congress must fix problems created by the Flores decision and the Trafficking Victims Protection Reauthorization Act passed in 2008. These two obstacles currently force U.S. officials to release migrant families because they cannot be held long enough to conduct effective asylum claim investigations.

“If they changed the laws to allow us to detain these families as a unit together for a short period of time as we go through the immigration process, this would almost stop,” he said referencing the current migrant family crisis at the border. “It happened before when we set up family detention in 20014-15 the numbers plummeted. The same thing would happen again.”

He explained that because of the broken laws and loopholes created by the system, “This industry of smuggling children and trafficking them has been allowed to flourish.”

Last month alone, Border Patrol agents apprehended more than 58,000 migrant families who illegally crossed the border — 167,000 so far this fiscal year. While Congress fails to take action, 13,000 migrants sit waiting south of the Mexican border and thousands more are on the way.