Tucson Sector Border Patrol agents seized 69 pounds of methamphetamine and fentanyl after stopping three illegal immigrants who had just crossed from Mexico. Officials estimate the drugs to be worth more than $3 million.

Agents working near Lukeville, Arizona, on Saturday evening encountered a group of migrants who were walking north, according to information obtained from Tucson Sector officials.

The agent found the men approximately one-half mile west of the Lukeville Port of Entry. The agents observed one of the men and found two camouflaged backpacks reportedly filled with illegal drugs, officials stated.

The agents tested the drugs and determined them to be 14 pounds of fentanyl and 55 pounds of methamphetamine. Officials estimate the value of the drugs to be more than $3 million.

Agents arrested one of the migrants, a 40-year-old Mexican national. They determined he was illegally present in the United States. Officials did not say what happened to the other two subjects.

The agents seized the drugs and turned them, along with the Mexican man, over to U.S. Immigration and Customs Enforcement Homeland Security Investigations for further investigation into the failed smuggling attempt. 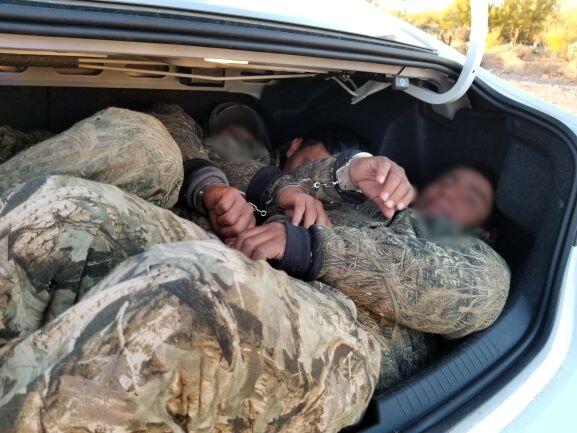 A few days earlier, Tucson Sector agents patrolling near Sells, Arizona, stopped a vehicle on Federal Route 20. During a search of the vehicle, the agents found three people locked inside the truck. None of the three wore masks or other Coronavirus protective gear.

The agents identified the three men as Guatemalan nationals — all illegally present in the United States.

They arrested the driver, a U.S. citizen, and seized the vehicle.