Border Patrol agents apprehended nearly 170,000 migrants in March who illegally crossed the border into the United States. This represents an increase of nearly 72 percent in one month.

During the month of March, Border Patrol agents took 168,195 migrants after they illegally entered the U.S. from Mexico according to the Southwest Land Border Encounters report released on Thursday by U.S. Customs and Border Protection.

“CBP has experienced an increase in encounters and arrests. This is not new. Encounters have continued to increase since April 2020, and our past experiences have helped us be better prepared for the challenges we face this year,” said CBP Senior Official Performing the Duties of the Commissioner Troy Miller in a written statement. “We are committed to balancing the need to maintain border security, care for those in our custody, and keep the American people and our workforce safe.”

While Miller says this is “not new,” it is exponential unprecedented growth as indicated by the blue line in the following CBP chart. 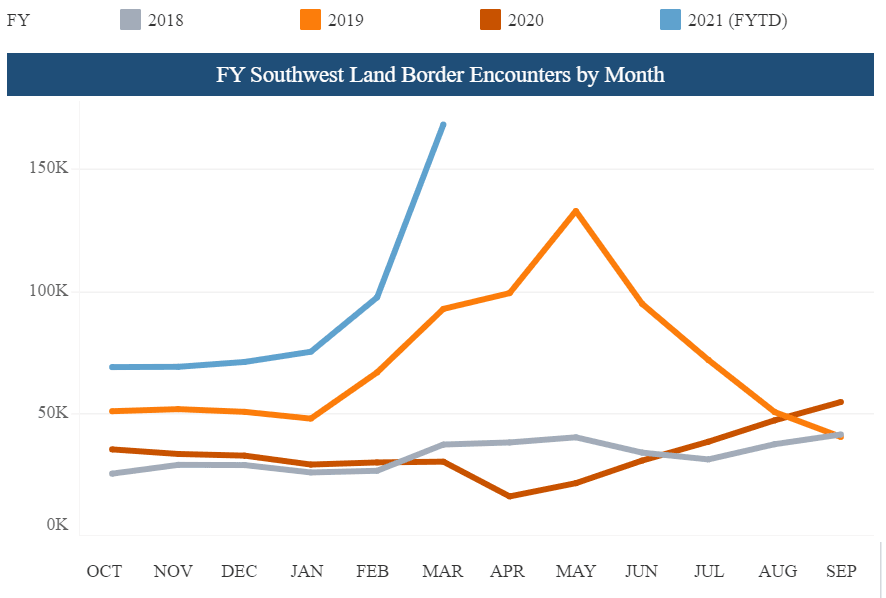 The Rio Grande Valley Sector continues to lead the nine southwest border sectors with 159,470 apprehensions so far this fiscal year (which began on October 1, 2020). This represents an increase of 243 percent compared to FY2020 year-to-date statistics.