Rio Grande Valley Sector Border Patrol agents found the remains of a suspected migrant hanging from a tree on a Texas ranch in Brooks County. The case is being investigated as a potential homicide, Sheriff Benny Martinez tells Breitbart Texas.

Brooks County Sheriff’s Office dispatchers received a call on Thursday from Falfurrias Station Border Patrol agents regarding the remains of a suspected migrant found hanging by the neck from a tree. Deputies and other law enforcement officials responded to the scene. 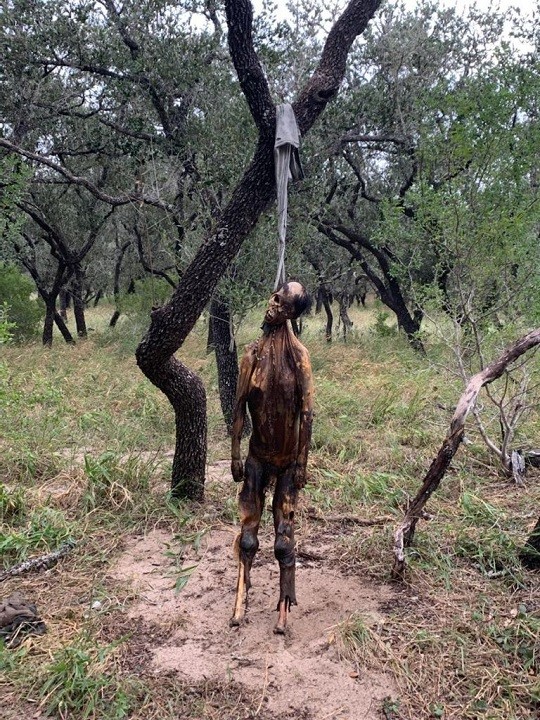 Border Patrol agents and Brooks County sheriff’s deputies recovered the remains of a migrant found hanging in a tree on a ranch 80 miles from the Texas-Mexico border. (Photo: Brooks County Sheriff’s Office)

“We have never seen anything like this in our county,” Sheriff Martinez told Breitbart Texas on Friday. “We regularly find deceased migrants in this county, but never anything like this. This is what our deputies and the Border Patrol agents have to deal with here.”

Martinez said the circumstances surrounding the migrant’s death are confusing at this point.

“We aren’t sure if the migrant was hanged or if he did this to himself,” the sheriff explained. “We will have to wait on a full autopsy to figure out what really happened.”

The investigators reported both of the decedent’s feet were removed, most likely by animals. Deputies found one foot at the scene. A search will be carried out Friday to attempt to locate the other. Investigators also found two identification cards belonging to a Mexican male.

After documenting the scene, deputies moved the remains to the county morgue where they will attempt to obtain fingerprints from the severely decomposed body.
A full autopsy will be conducted by the Webb County Medical Examiner’s Office in Laredo, Texas.

Martinez said his deputies have processed the death scenes of nearly 100 migrants in Brooks County in 2021. In addition to the 98 found dead on ranches, the deputies also processed a fatal crash where 10 migrants died and 20 more were injured.

The 118 migrant deaths recorded this year compares to 34 found dead for the entire year in 2020, Martinez said. This represents a nearly 250 percent increase.

“I just returned from three days in our nation’s capital,” Martinez said. “We try to factually tell people how bad it is this year. Some seem to understand, but many claim we are making this up. This death, while an extreme situation, is yet another example of the tragic deaths occurring here.”