Crime is soaring in Seattle, Washington, in the wake of the city council’s decision to “defund the police” partially in the wake of the George Floyd riots, Black Lives Matter protests, and “Capitol Hill Occupied Protest” (CHOP) of the summer of 2020.

Last quarter, the city recorded 13 homicides, the most in six years. Seattle is on a pace to surpass last year’s crime numbers — which were worse than the year before, the Seattle Times reported:  “Last year, 88 people were fatally shot and 372 were wounded by gunfire in King County, surpassing 2020’s record high of 69 firearm-related homicides and 268 shooting injuries that were largely attributed to the stressors of the pandemic.”

“We’ve had over a 95% increase in more shots fired, with a 171% increase in people being shot compared to last year,” Police Chief Adrian Diaz told our numb City Council recently. “And last year was one of the highest years we’ve had on record.”

Aggravated assaults — which last year were already up 24% — are up another 33% in the first quarter of 2022, as compared to the first three months of 2021. That’s according to preliminary reports posted at the city’s open records portal.

Westneat noted that Seattle had gone 30 years backwards in terms of crime, nearing a per capita crime rate last seen in 1995. It has also lost 375 police officers, putting the city’s police force at levels last seen in the 1990s.

In June 2020, Black Lives Matter protesters occupied six blocks of the city after local leaders told then-Police Chief Carmen Best to stand down and abandon the Eastern Precinct. The protesters called their utopian, crime-filled community the CHOP or the “Capitol Hill Autonomous Zone” (CHAZ). It lasted for weeks before being cleared by authorities, following threats by then-President Donald Trump to intervene. 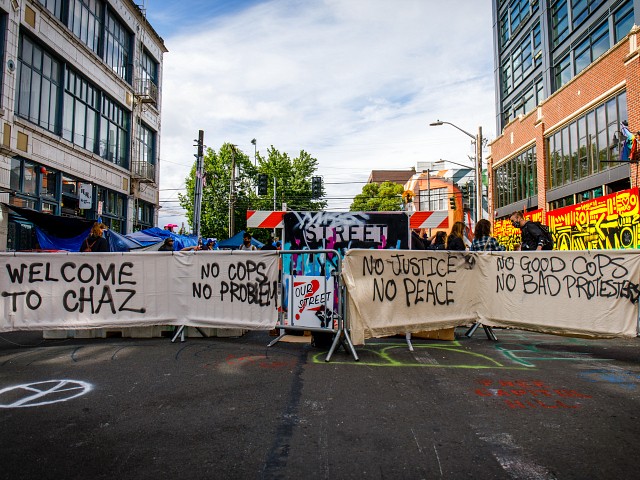 As Breitbart News reported at the time, Seattle’s city council voted to “defund the police” by 50% in 2020, overriding then-Mayor Jenny Durkan’s veto, and starting with a “down payment of 100 officers being cut from the force.”

Police Chief Best, whose salary was to be cut, promptly retired.

Public outrage has grown so bad in the left-wing city that a Republican, Ann Davison, was elected city attorney last November.