The nation’s voters are not divided by racial and ethnic hatreds, but by progressives’ demand that intrusive government policies be used to aggressively level all disparities between racial and ethnic groups, according to an op-ed in the New York Times.

“The country is not divided by racial conflict, but by conflict over racial ideology. … Liberal whites — not minorities — are setting the tone on these issues,” says the op-ed by Eric Kaufmann, a professor at  the University of London and author of “Whiteshift: Populism, Immigration and the Future of White Majorities.”

Since 2012, white liberals have moved considerably left on questions related to race, reflecting both a campus- and online-driven cultural awakening that has accelerated in response to Mr. Trump. On the American National Election Study’s scale measuring how respondents feel about a group — white liberals are warmer toward minorities than their own racial group.

Yet Trump voters rate minorities relatively warmly. Racial ideology rather than race accounts for their differences with white Democrats: White Republicans reject [the progressives’ claims about] affirmative action, the notion of white privilege and the idea that racial discrimination continues to hold minorities back.

Minorities again rank in between on many of these measures. When it comes to “microaggression” statements such as “America is a colorblind society” or “You are so articulate,” few blacks and Hispanics find these offensive while more liberal whites do.

In contrast, President Trump’s MAGA coalition favors color-blind government support for all Americans. The popular support includes Trump’s “Hire American” policy which is pressuring companies to raise wages for lower-income Americans — including blacks and Latinos — amid angry opposition from elite investors and CEOs.

So who are the white progressives who are pulling Democrat presidential candidates so far from the core of American society?

Kaufmann points to a 2018 study, titled “Hidden Tribes: A Study of America’s Polarized Landscape.” The white progressives are about eight percent of the electorate and “younger, highly engaged, secular, cosmopolitan, angry.”

This group says a big active government is a moral duty: 86 percent say, “People’s outcomes are outside their control,” so 95 percent say “government should take more responsibility to ensure everyone is provided for.

Progressives want support among minorities: 95 percent say, “The police are often more violent towards African Americans than others.”

Progressives want votes from immigrants and businesses: 99 percent of progressives say, “Immigration is good for America, helping sectors of our economy to be more successful and competitive,” and 99 percent say, “Undocumented immigrants who arrived as children and grown up here should be protected from deportation and given the chance to earn citizenship.” 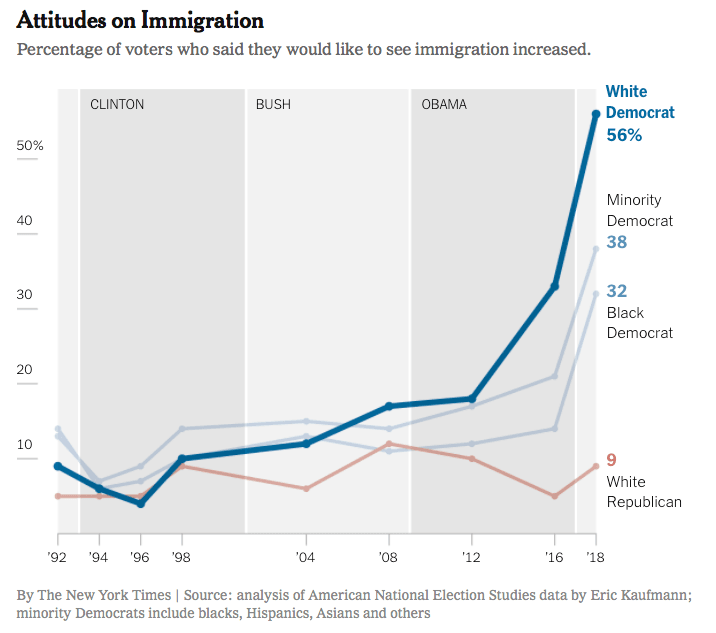 President Barack Obama helped to create this progressive vanguard during his 2012 election when he created the DACA amnesty for illegal immigrants during the depths of the government-created 2008-2016 depression. 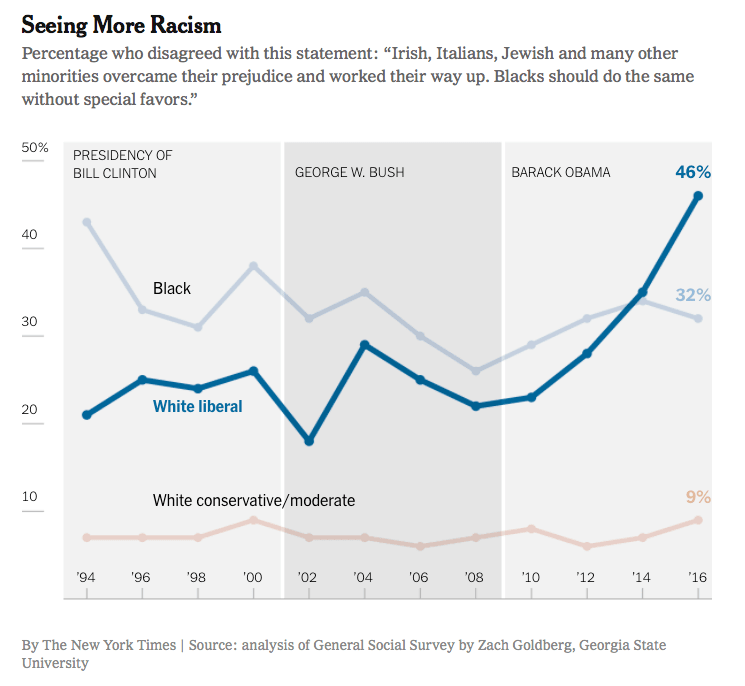 This new focus on racial and ethnic circumstances has largely supplanted the left’s former focus on income redistribution. This shift was spotlighted in 2015 when Ezra Klein, an editor at Vox.com, interviewed Sen. Bernie Sanders:

I was disappointed, if not surprised, at the visceral horror with which Bernie Sanders reacted to the idea when interviewed by my colleague Ezra Klein. “Open borders?” he interjected. “No, that’s a Koch brothers proposal.” The idea, he argued, is a right-wing scheme meant to flood the US with cheap labor and depress wages for native-born workers. “I think from a moral responsibility, we’ve got to work with the rest of the industrialized world to address the problems of international poverty,” he conceded, “but you don’t do that by making people in this country even poorer.”

There are two problems with Sanders’s view on this, one empirical and one moral. He’s wrong about what the effects of an open-border policy would be on American workers, and he’s wrong in treating Americans’ lives as more valuable and worthy of concern than the lives of foreigners.

Progressives are also determined to display their solidarity against conservatives: 97 percent of progressives say that “many people nowadays don’t take discrimination against Muslims seriously enough”; 60 percent say, “I’m not proud of my country’s history”; 99 percent disapprove of Trump; and 99 percent say, “Many white people today don’t recognize the real advantages they have.”

This group has a huge influence in the Democrats’ 2020 primaries — and it is pulling the Democrat candidates into the progressive worldview. For example, on March 21, the Associated Press reported that Democrat Sen. Kirsten Gillibrand offered to provide taxpayer-funded lawyers to help illegal migrants stay in the United States once they ask for asylum:

Gillibrand says she’s working on legislation that would guarantee asylum seekers a lawyer, create a system for Americans to foster immigrant children and break immigration judges out from under the U.S. Department of Justice so they can be independent.

These white progressives are often wealthy, and they downplay economic issues, such as taxes. In general, they do not want the government raising taxes on prosperous people like themselves or regulating business in ways that hurt progressives. The “Hidden Tribes” report hints at this pro-establishment economic angle as it describes a stereotypical progressive:

Keane is a late middle-aged attorney living in Indiana close to his family. His three most important roles in life are as a father (he has three boys), an attorney and a guitarist.

He describes himself as a liberal because he believes in the role of government in helping citizens. As a result of two divorces and changing jobs, he has had nancial problems, which he believes has given him more empathy towards others. Despite his struggles, as a white male he sees how racism persists in America and people like him have a clear advantage, while women and people of color do not. To him, America “is not an egalitarian society by any means.”

He feels that America is “pretty divided” but finds it hard to get a feel for what most Americans are thinking, because crazy voices are ampli ed on the internet. He believes that compromise is important, but while we should compromise on issues such as taxes, there are some issues on which there should be no compromises such as slavery or racism.

The authors and funders of the “Hidden Tribes” study, however, ignored two huge political pillars of the progressive class.

The study did not address the progressives’ core political strategy of divide-and-rule diversity. The strategy uses the goal of racial equality to justify mass immigration, an alliance with anti-progressive Islamic groups, and government suppression of mainstream practices and groups, such as the public’s recognition that men and women are different and complementary.

The study did not look at progressives’ alliance with business, usually via progressive offers of more diversity, government aid, and cooperation with investors. For example, progressives’ support for more immigration helps investors by lowering wages and spiking the number of consumers — even though immigration ensures many liberal graduates lose wages and careers to imported H-1B visa workers. Immigration also exacerbates environmental problems by importing more poverty, more consumers, and more polluters into the United States:

American grads lose jobs & cash to 400,000 foreign students (each year!) who get OPT work permits via their colleges. One low-grade Va. college – IOW a 'visa mill' – is facing closure for not keeping up appearances while trafficking the college-grad labor. https://t.co/QTnOYhXuQz

This progressives’ alliance with business is possible because the Internet has enabled a “diversity economy” of mass variety, not just of mass consumption. This economic diversity creates many consumer niches and professional opportunities for college-trained experts. A 2010 article in the National Journal described this new political and economic alliance between CEOs and left-wing progressives:

[Immigration lawyer Jay] Marks’s combination of professional skills, self-serving cultural pitch, and customer niche offer a prime example of a new wave of fast-growing enterprises that are having a profound impact on the country’s economy, politics, and culture. These entrepreneurs don’t use low prices to sell their services. Instead, they prosper by combining practical benefits within cultural themes that offer self-esteem and a sense of community to diverse slices of the consumer marketplace.

The amazing diversity of these enterprises’ niche-marketing strategies distinguishes them from traditional companies— General Motors and Wal-Mart, for example—that succeeded by pitching low-cost, mass-produced goods or services to a mass market. These new outfits, and the diversity entrepreneurs that push them forward, have an outsized impact on the economy because their companies, such as Google and Whole Foods, inspire a different kind of demand for their products and the materials needed to make them. To make and sell its caramel macchiato drinks to customers, for example, Starbucks buys a lot of coffee beans from farmers, electricity from power companies, and time from employees.

This new wave has created a diversity economy atop the older economies of mass consumption, industry, and agriculture. In turn, the entrepreneurs’ cultural preferences and political interests have reshaped the Democratic and Republican parties to the extent that the old political divides of Left and Right, conservative and liberal are becoming obsolete. In their place is a system that splits each political party, separates the traditionalists’ one-best-way ideals from the new entrepreneurs’ demand for diversity, and fosters the rival personality cults that emerged simultaneously around President Obama and former Alaska Gov. Sarah Palin.

In contrast, Trump’s “Hire American” economic strategy is helping to raise wages and productivity for ordinary Americans. So it is under a simultaneous and coordinated attack by the establishment alliance of progressives and investors, lobbyists and staffers, establishment journalists and CEOs. That bipartisan pressure is bending Trump towards endorsing a claimed need for more and cheaper immigrant workers.

The real battle will come in 2020 when voters decide if they prefer Trump’s raucous pro-American policies or the progressives’ demand that Americans submit to rule by their social betters on Wall Street and in the Ivy League:

Trump's 'Hire American' policy is forcing investors to pay record wage gains to American voters. So CEOs are demanding a special pipeline of cheap foreign replacement workers. Trump says he is flip-flopping from voters to CEOs: But what do polls say? https://t.co/fFQlRMmdOq