Wages for blue-collar Americans are rising by 4.3 percent in 2019 — or 2.7 percent after inflation — in President Donald Trump’s tightening labor market, according to Goldman Sachs.

In contrast, white-collar salaries are rising at a much slower rate amid the bipartisan policy of inviting roughly 1.5 million foreign graduates to take the jobs needed by U.S. graduates.

The 4.3 percent estimate is part of a December 9 report by Goldman Sachs’ chief economist Jan Hatzius, who wrote:

It is a myth that the labor market tightening over the past several years has failed to translate into stronger wage growth. True, the year-on-year growth rate of average hourly earnings for all employees has edged down from 3.4% in February to 3.1% now. But our broader wage tracker has continued to trend higher and stands at 3.3% now, up from 3.0% in [the first quarter of 2019]. The acceleration has been even more pronounced among lower-paid workers … And our more comprehensive lower-income wage tracker has accelerated to 4.3% year-on-year, which is not only the fastest pace since the financial crisis but is also above the peak rate of the previous cycle and near the peak rates of the 1990s expansion.

A prior report, released in November by Hatzius and other economists, predicted continued wage growth throughout 2020:

Solid growth should mean another year of above-trend job gains. We expect the unemployment rate to fall to levels last seen during the Korean War, bringing a further pickup in wage growth to 3.5%. Inflation is likely to rise more gently, falling just short of 2% if recent tariffs on consumer goods are rolled back. 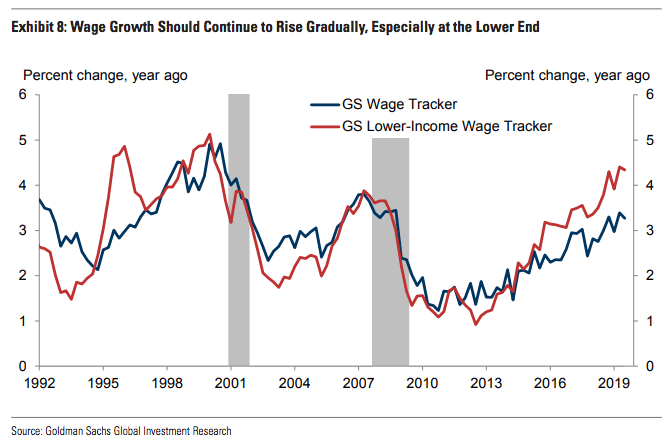 Various business groups echo Goldman Sachs’ supply and demand analysis. For example, the National Federation of Independent Businesses reported a survey of its members in November and concluded that “retailers are facing compensation pressures due to labor shortages.”

The Wall Street Journal described how FedEx’s facility in Memphis, TN, is so short of workers that it is raising the wages of workers who live four hours away in Greenwood, MS:

FedEx has tapped deep into the Mississippi Delta to find workers for the largest facility in its world-wide supply chain. Lured by the chance to work for a global company and earn hourly wages starting at $13.26, some 200 workers gather in a Walmart parking lot in Cleveland, Miss., five nights a week to board buses bound for Memphis.

“They’re important to the daily operation,” said Barb Wallander, a senior vice president of human resources at FedEx. “We depend on them.”

Kinyuna Cannon, 25 years old, has been working for FedEx for the past four months. The starting wage was well above the $7.85 an hour she earned at her last job at a nursing home. “It is the transportation and the pay,” she said of the appeal of the FedEx job, which are part-time positions that provide health and retirement benefits.

Nationwide, the rising wages are close to taking a bite out of investors’ profits and their Wall Street values, Goldman Sachs warned its clients:

Further acceleration would take wage growth above the pace of just over 3% that we think is consistent with 2% inflation and trend productivity growth, resulting in a combination of reduced profit margins and higher inflation.

Goldman Sachs’ straightforward admission that labor shortages tend to raise wages is anathema to the lobbyists and allied academics who are pushing for migration increases.

For example, Todd Schulte is the director of the FWD.us, an advocacy group set up by West Coast investors. He recently touted an article that claimed wages fell in the late 1920s when a 1924 immigration reform reduced the inflow of unskilled legal immigrant workers and so allowed U.S. citizens to compete for higher-wage jobs in the industrial cities.

So far, Trump has rejected those corporate demands, although he has also said he wants to keep the economy growing by delivering more workers to expanding companies.

On Tuesday evening, Trump  touting the wage raises to his audience in Pennsylvania, saying that “wages for low-income workers have gone up 10 percent.”

Trump’s calculation, however, does not exclude inflation. But the wage gains from Trump’s tightening labor market are gradually spreading prosperity from the wealthy coasts to sidelined workers and communities in the heartland.

Immigration reformers are trying to slow push by Democrats & farm CEOs to amnesty 1M+ illegals & import cheap H-2A visa-workers.
Why would investors hire Americans or buy labor-saving machines if many H-2As will work cheap for the hope of citizenship? https://t.co/cz53qbqp3v