The unemployment rate among legal immigrants and illegal aliens has spiked above the unemployment rate suffered by American citizens, undercutting claims by business that they need migrant workers, says a report by the Center for Immigration Studies.

The report spotlighted the 18 percent unemployment rate among recent immigrants on April 20, up from just 6.8 percent in January.

“The basic point is immigrants seem to have been harder hit, so if the immigrants already here are doing so badly … how does it make sense to bring in more workers?” he said. “Won’t those people you bring in struggle too?”

On April 20, 16 percent — or one-in-six — of Americans older than 25, and without college degrees, was unemployed. That is a huge jump from just four percent of those Americans in January, according to the federal data in Camarota’s report.

The unemployment rate for similar-aged Americans with college degrees rose from two percent to eight percent over the same period.

The rapid rise in unemployment has worsened since the April 20 numbers were released.

Breitbart News reported on May 14 that 2.98 million people registered as unemployed in the second week of May, boosting the number of unemployed to 36.5 million.

This sudden rise of unemployed among working-class Americans has wiped out the job gains since the 2008 crash, said Camarota. That pattern has existed for a long time, he said, and it is ratcheting down employment rates for Americans and creating the environment for many more “Deaths of Despair” by opioids, suicide, and alcoholism.

“It never gets back to where it had been — that is a social disaster,” he said. 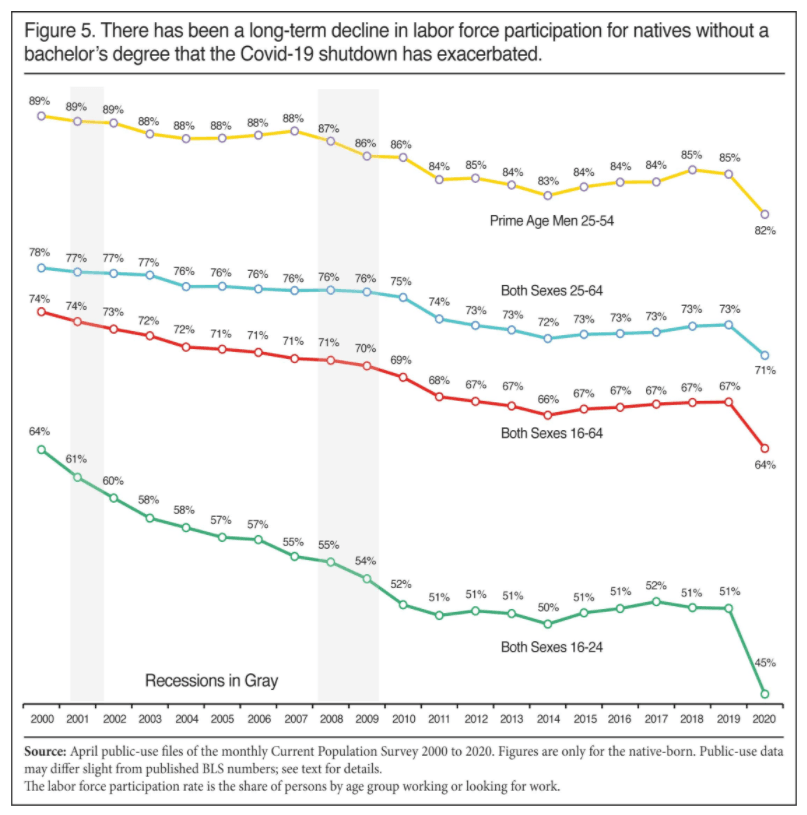 The U.S. labor market includes millions of legal immigrants and illegal aliens who compete for jobs against Americans.

“With 18.2 million natives and 4.3 million immigrants unemployed, and millions more having given up even looking for work, it is impossible to justify high levels of foreign workers in the United States,” says the CIS report.

Amid the economic free-fall, and despite April 22 reforms announced by President Donald Trump, U.S. companies continue to ask for more legal immigrants and visa workers.

For example, many Fortune 500 companies are rushing a federal agency to extend work permits for thousands of H-1B visa workers as Trump and his deputies argue over visa curbs that would help Americans regain jobs lost in the coronavirus crash.

Mark Zuckerberg’s Facebook asked and got “continuing approval” extensions for 611 of its H-1B visa workers from the staff at the United States Citizenship and Immigration Services agency.

Each visa extension allows a foreign H-1B worker to stay another three years.

Tim Cook’s Apple got 647 extensions, Bill Gates’ Microsoft snagged 903 extensions, and Jeff Bezos’ Amazon got 1,245 extensions from the agency, which is part of the Department of Homeland Security.

Just 62 of these 3,497 requests for foreign workers were denied by USCIS, according to data displayed by the agency’s ‘H-1B Employer Data Hub.’

Fortune 500 companies & many professional firms are extending visas for many resident H-1B workers, despite huge layoffs of American graduates (or anti-discrimination laws)
647 for Apple, 903 for Microsoft, 1,245 for Amazon, 611 for Facebook, etc. #H1Bhttps://t.co/9XVRXFME2z

Democratic legislators have stepped up efforts to welcome illegal migrants by offering work permits and cash to illegals who hold jobs in groceries, farms, trucking companies, hospitals, and other “critical infrastructure” sectors. The giveaway is part of the $3 trillion ‘HEROES” act revealed by Democrats on May 13

“Instead of focusing on helping 33 million unemployed Americans get back to work, the so-called Heroes Act uses the COVID-19 pandemic to give amnesty — and cash payments — to illegal foreign workers in the United States,” said Roy Beck, founder of NumbersUSA.

Business groups are fighting hard to preserve the inflow of one million legal immigrants each year, partly because the immigrants also serve business as consumers and renters.

For example, companies asked a federal judge in January 2020 to block Trump’s “Public Charge” immigration reform because it will reduce the inflow of immigrant consumers and shrink government spending. The legal filing said:

If admitted to the United States and allowed to remain as permanent residents, those individuals [who may be excluded] would pay taxes, contribute the value of their labor to the workforce, and purchase goods and services from American businesses— thereby boosting economic growth.

The magnitude of this effect is enormous: One study calculates that “for every 1 percent increase in [the] U.S. population made of immigrants, GDP rises 1.15 percent.”

The coronavirus crash has decisively shifted the public's ambivalent priorities on immigration:
Away from politely welcoming migrants, and towards loudly demanding more jobs for American grads & blue-collars.
Business & investors are fighting back … https://t.co/Ad05lnaYNP