President Joe Biden’s approval ratings on immigration have crashed, according to a poll of Texas voters by Quinnipiac.

The September 24-27 poll of 863 registered voters showed that Biden’s immigration ratings have plunged to 20 percent approval, with 71 percent disapproval.

Much of the credit for the poll damage should be shared with Biden’s own border chief, Alejandro Mayorkas. The poll was taken as the TV networks showed how Mayorkas’ welcome for migrants helped cause the landing by 30,000 migrants in Del Rio, Texas.

In June, 29 percent of registered Texas voters backed Biden’s loose-border policies, according to a prior Quinnipiac survey.

The brutal Quinnipiac ratings are a huge contrast from industry-funded, pro-amnesty, rose-tinted push polls used to promote the pending amnesties in the U.S. Senate.

For example, a September 1 survey by the American Business Immigration Coalition (ABIC) claims that roughly 75 percent of voters support the amnesty proposals in the Democrats’ budget-reconciliation spending bill. 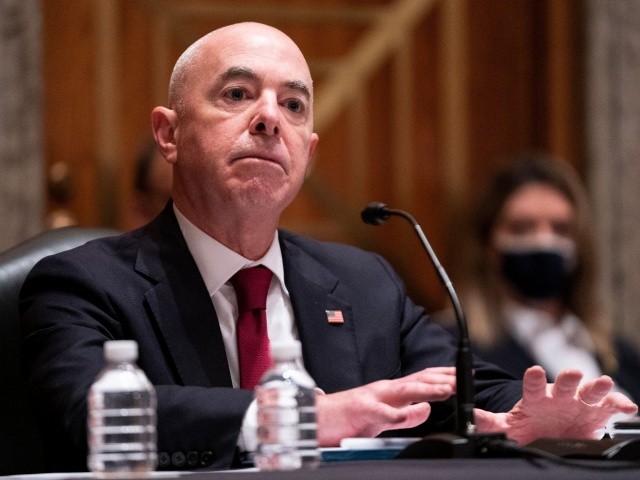 US Secretary of Homeland Security Alejandro Mayorkas testifies during a hearing to discuss security threats 20 years after the 9/11 terrorist attacks, on September 21, 2021, at the US Capitol in Washington, DC. (GREG NASH/POOL/AFP via Getty Images)

The push poll is intended to prod two Democratic Senators in Arizona — Sen. Krysten Sinema and Sen. Mark Kelly — into voting for the Senate’s draft amnesties and immigration expansions. ABIC was formed by business leaders in healthcare, real estate, construction, and energy.

The ABIC poll was funded in cooperation with Mark Zuckerberg’s FWD.us advocacy group for West Coast investors. “If you look at these polling results, you talk to business leaders, you talk to folks who are directly impacted — DACA recipients in Arizona — it’s an easy call, and I’m quite confident about where both senators are going to end up,” claimed Todd Schulte, the head of Zuckerberg’s FWD.us.

But the Quinnipiac poll showcases the political damage inflicted by Biden’s invite to migrants.

Only 26 percent of Taxes Hispanics support those policies, while 66 percent disapprove.

Only 33 percent of blacks support his border policies, the poll said.

Biden’s border policies have only 52 percent support from Democrats. 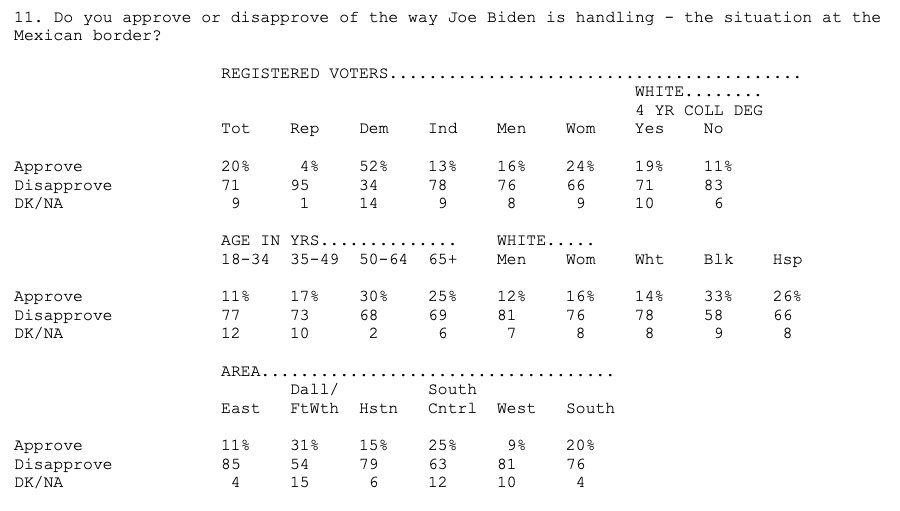 In 2014, Democrats lost five Senate seats after they pushed the 2013 “Gang of Eight ” amnesty, which FWD.us also insisted was very popular.

Biden’s border policies have helped to drag down his overall ratings.

Since April, public opinion has shifted 17 points against Biden’s loose migration policies, according to polls by Morning Consult for Politico. An August 28-30 poll of 1,997 registered voters shows Biden with 55 percent opposition and just 36 percent support. In a similar April, Biden had 45 percent opposition and 43 percent support on immigration.

This 17-point shift is echoed by other negative polls in August — and it may upset the Democrats’ plan to rush four massive, wage-cutting amnesties through the Senate in the fall. 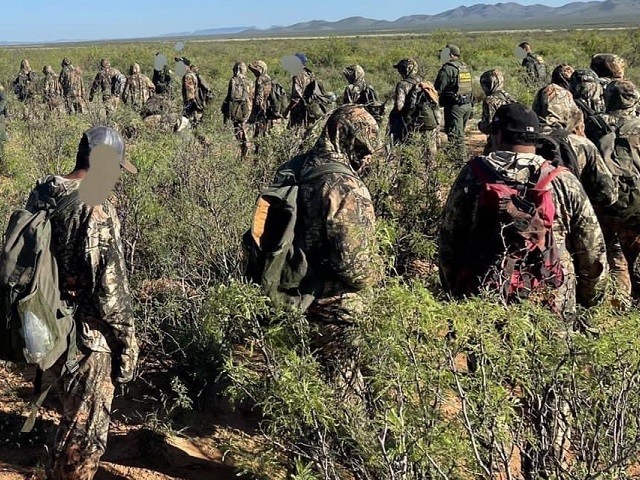 The Quinnipiac poll is the first poll of Biden’s immigration ratings after the Del Rio chaos.

The Democrats’ support is likely to fall even further if GOP leader Rep. Kevin McCarthy stresses the pocketbook impact of rising migration. Those dinner-table issues include declining wages, spiking rents, and the continued shift of investment and housing wealth from low-migration heartland states to the high-migration, high-wealth coastal states.

Republicans are learning to make that pocketbook pitch.

“Democrats in Congress would rather ignore [President] Joe Biden’s humanitarian disaster than give up their dream of open borders,” said a September 25 weekend Republican Address by Rep. Yvette Herrell (R-NM). She continued:

McCarthy tweeted the Herrell message on the 25th — and then retweeted a September 28 tweet from Rep. Jason Smith (R-MO) that spotlighted the amnesty’s danger to Americans’ ability to earn a living:

Washington Democrats set aside over $100 billion in their reconciliation bill to grant amnesty to over 10 million illegal immigrants, making them eligible for federal benefits and putting them into direct job competition with American workers.

For many years, the donor-funded GOP leaders, including McCarthy and Rep. John Katko (R-NY) — and their staff — have downplayed the pocketbook impact of migration on Americans’ communities. One reason for this policy is to avoid making any campaign promises on immigration that would be opposed by the donors.

Instead, the GOP tries to spin up the turnout of its base voters by spotlighting the non-economic aspects of the migration problem, including crime by migrants, border chaos, and drug smuggling.

This push amnesty is being led by Zuckerberg’s FWD.us network of coastal investors who stand to gain from more cheap labor, government-aided consumers, and urban renters.