A rising share of Republicans — but a declining share of Democrats — view migration as a “critical issue,” according to a pro-migration survey firm.

The “critical issue” numbers are important for politicians because they are a side-window into voters’ genuine opinions about migration. For example, many voters will feel under pressure to tell pollsters that they welcome migration or amnesties — even though they quietly oppose the inflow of foreign workers into the jobs needed by other Americans.

So the poll numbers on “critical issue” suggest that few Democrats want to support the Democrats’ 2022 goals of more amnesties, more visa workers, and more migration — even though many Democrats tell pollsters that they would welcome those goals.

REVEALED: Thousands of migrants, enrolled in the "Remain in Mexico" program, released into the U.S. interior are resettled in Florida and Texas. https://t.co/XpE49eDIHq

The results will likely fortify growing GOP opposition to the pro-migration, pro-China giveaways in the Democrats’ America Competes Act, which was pushed through the House on February 4.

They call it the American Competes Act. But make no mistake. It’s a bill that concedes to China … Here are just a few excerpts. On page 1,689, it provides a new unlimited [college graduate] green card program for the Chinese Communist Party to exploit.

GOP Senators are speaking up: “The partisan bill from the House has also added provisions related to immigration, from creating new types of visas to removing green card caps,” Sen. John Cornyn (R-TX) said on February 4. “The [alternative] Senate bill needs to be the template for what is ultimately done by the conference committee and what is ultimately passed by the United States Congress.”

The Democrats’ China bill encourages U.S. employers to hire foreign graduates by offering to pay the graduates with government-provided citizenship. This giveaway allows the CEOs to spike their stock prices by hiring the imported cheap and complaint foreign graduates for many ordinary white-collar jobs. Those jobs, such as accountants and software experts, are needed by the sons and daughters of Americans’ middle-class.

The PRRI report is based on a series of PRRI surveys, including a survey of 2,508 people conducted from September 16-29, 2021. The report is titled “Welcoming Immigration Policies Remain Popular, but Immigration is Not a Critical Issue for Most Americans.”

The research was funded by pro-migration groups, including the Carnegie Corporation of New York. 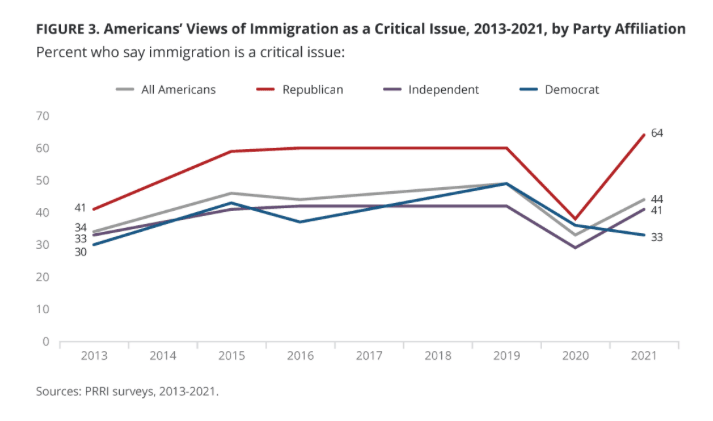 The chart shows the rising concerns of Democrats, which peaked in 2019. That year, 49 percent of Democrats deemed immigration to be a “critical issue” while pro-migration journalists echoed and touted demands by pro-migration Democrats and business groups.

With Trump gone, the Democrats’ emotion waned to 33 percent and was heading downwards in September 2021.

The GOP line shows that about 60 percent of GOP supporters viewed migration as critical from 2015 to 2019. But in the election year of 2020, their worries crashed down to 40 percent amid Trump’s enforcement of long-ignored migration laws. The steep was partly caused by some of his business-friendly top aides who minimized any mention of cheap-labor migration during the lost campaign.

Since 2019, the share of GOP voters who view immigration “as a critical issue” has spiked from about 40 percent to at least 64 percent.

The “critical issue” numbers are useful tools for understanding groups that are clearly tied to particular policies, such as high-immigration Democrats and low-immigration Republicans.

But the survey quickly loses value because it does not provide any data about why groups are concerned. For example, the report says that 35 percent of blacks and 49 percent of Latinos see immigration as a critical concern — but does not explain what shares of the 35 percent want less or more migration.

The report does show that white-collar are less concerned about migration than in prior years, despite the hidden inflow of foreign migrants into many white-collar careers and jobs:

This widening gap is likely caused by the increasing “woke pressure on post-graduate Americans, many of whom views and opinions can be easily monitored via the Internet by their peers.

Advocates for migration can find good news in the report, including high shares of voters who can be nudged to approve amnesty for various classes of migrants.

Overall support for migration is being held up by progressives’ post-2012 shift towards woke politics.

In contrast, the share of Republicans who say “Immigrants Strengthen American Society” dropped from 39 percent in 2011 to 28 percent in 2021. That question gets 78 percent support among Democrats in 2021, up from 62 percent in 2011. 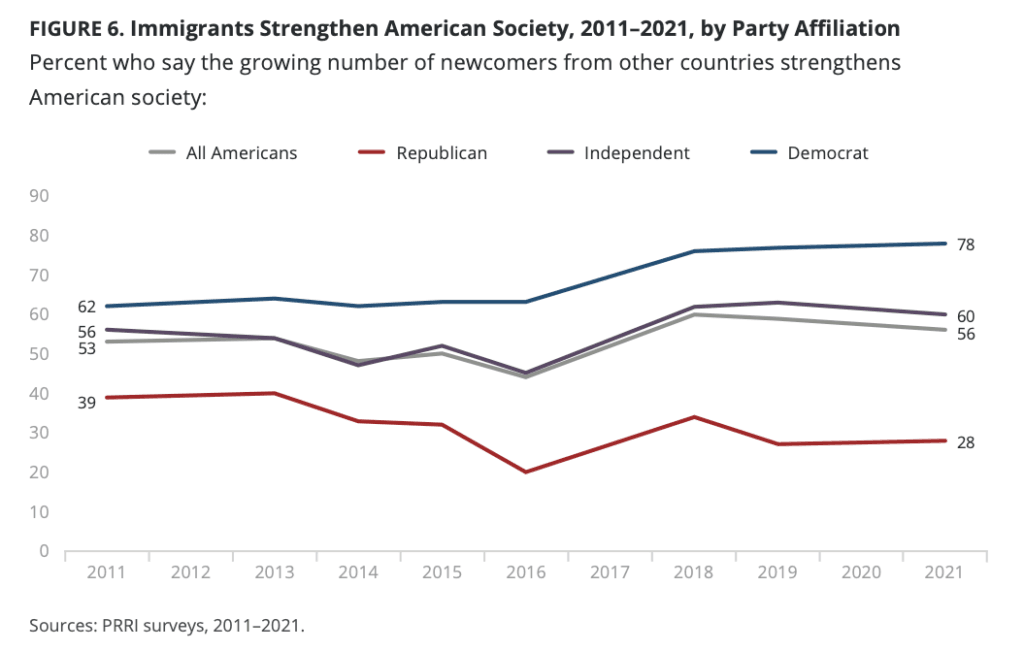