I don’t recall liking much of Nora Ephron’s work other than “When Harry Met Sally.” In fact, if I knew she made “Julie and Julia,” I probably would have avoided it, since “Sleepless in Seattle” and “You’ve Got Mail” just kind of mash together in my mind. But “Julie and Julia” is more than good: it’s brilliant cinema. 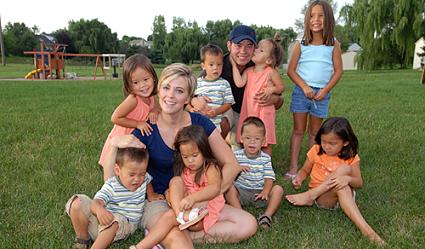 The first thing that grabbed me was the character work. The hero, Julia Powell (her real life blog is here) is a foodie blogger played by Amy Adams. I’m used to watching Amy Adams over my kid’s shoulder in “Enchanted,” which plays in our house on continual loop. I didn’t know Amy knew how to turn down the volume and play a “plain-Jane, yet interesting”… but she’s awesome. This isn’t her usual glowing, perky role where she turns it on like a fire-hose. And she doesn’t turn invisible like when she played a piece of cardboard in “Doubt.”

Back to the characters because “J and J” is a feast of interesting, appealing people I haven’t seen chew up the screen like this in a long time. The real Julia Child is already a great character, but Streep not only personifies this larger than life personality, she pulls off hilarious physical acting. She’s a comedic presence that had our audience laughing with every scene. And she looks huge, just like the real Julia Child. As a 6’8″ fellow, I appreciated the height jokes like when Streep reclines in a bed only to have her feet extend well beyond the mattress.

But Streep shows us sides of Child we probably hadn’t seen before: her sexuality, her competitive spirit, and the mourning for children. How painfully ironic that her name was Child.

I don’t know how Streep does it, but she makes her jowls look bigger. Her hands look big and mannish. Her shoulders rounded so that she looks like she’s playing a man in drag, which is kind of how Child came off to me. A refrigerator in a dress.

Stanley Tucci was in another favorite food movie of mine, “Big Night.” My friends told me to see Big Night then go out for Italian food. My Beloved and I saw “J and J” on date night then went out for dinner. It was one of our better date nights… much better than the time I made her see “Mimic.” But guys, don’t be fooled into thinking this is a chick flick. It’s a people flick. I’d take anybody to see this and if they didn’t like it, they’d need therapy. Yeah, this is the first sure fire Oscar contender I saw this year. At least this is the one I’ll be rooting for when they award it to some movie about a transvestite who marries a 12-year-old boy then murders him because Republican Christians fired him from his job.

Where was I? Oh yeah, Stanley Tucci. He plays the nicest guy in the world. He’s a great, understated character to provide contrast to Streep’s living cartoon. Hats off to Chris Messina as Julie Powell’s long-suffering husband and Jane Lynch who plays Julia Child’s sister.

This is for Nora Ephron: stop wasting your time at Huffington Post and make more movies. As a married man, you’re one of the few who seem to get marriage… even men in marriage. You seem to like men, which is rare among women writers. As someone who writes graphic novels, you’re one of the few who gets what it’s like to long for a significant project to find its way to publisher. You get the narcissism of working on one’s craft while someone else is in the house being neglected for some great piece of art. As someone who knows his way around the kitchen, you get the love of cooking, experimenting with recipes, even shopping for ingredients. Finally, you get Julia Child… including details like her love of sending post cards.

My wife went through a phase when she became an airplane pilot in the ’90s where she studied great women of the last century. She stumbled on the biography of Child Appetite for Life by Noel Riley Fitch. So inspired was my Beloved that she mailed Julia a birthday greeting for her 88th birthday. A few weeks later, she received a hand written post card from Julia herself! We were both so excited and my Beloved went into a cooking phase where I was the benefactor.