We are only two episodes into the new season, and it appears that AMC’s “The Walking Dead” may have been resurrected after last year’s mostly craptacular second season, which was preceded by a pretty craptacular first season.

And the reason seems to be the conservative outlook that the show has now embraced.

Let’s pause for a moment to let the fanatic liberal fanboy virgins fulminate and fret over the notion that their favorite zombie show may have been saved by their characters’ (and the writers’) change – unconscious almost certainly – from a liberal world view to a conservative one.

Right now, many moms of creepy shut-ins are shouting down into the basement, “Hey, what are you yelling about, Melvin?” The truth hurts.

“The Walking Dead” has finally started to get good because the characters and the show itself have shed the essentially liberal world view that not only led to two seasons of failure for their characters but made the show itself almost unbearable to watch.

Let’s understand the difference between a liberal world view and a conservative one. It’s not necessarily about retail politics, though you got some sense of it with the “I don’t believe in guns” crap early on, as if the world wasn’t crawling with cannibal corpses looking to dine on the lesser cast members.

And it is not just that the views of the Georgian characters seemed to be the same as the views of the provincial Hollywood screenwriters – country folk are racists and sinister, religious folk are abusive and borderline psycho, and the only good cops are the ones who soft pedal the macho.

It’s a world view that goes to basic premises. Conservatives (I am using these terms as they apply within the context of modern American politics – save the comments on how “conservatives” are really “classical liberals”) hold a tragic world view. There are iron laws of human nature that don’t change. In contrast, liberals hold an idealized view, one where man can change his essential nature, where he can be perfected.

But this requires a rejection of the world as it is in favor of a world as it can (they believe) be. This leads to the conservative critique that liberals ignore reality and base their policies on feelings. But that is a natural consequence of an ideology concerned not with how man and the world are, but with what they might be transformed – “fundamentally transformed,” to quote  a well-known liberal – into.

Now, let’s apply this to the first two seasons of “The Walking Dead.” Most of the problems (both within the plot and with the show itself) were a result of characters denying the reality of their situation. Characters focused energy arguing over their petty emotional conflicts like they were back in the suburbs and not in an entirely changed world. Their denial of reality manifested in their rank stupidity – my favorite example was their deciding to gather around a campfire facing inward with no security, like they were going to toast up some s’mores.

But the greatest example of denial was the entire second season, where the survivors wound up on Herchsel’s farm. The farm itself was a rejection of reality – they simply assumed it was secure against all evidence and immediately returned to their personal dramas rather than dealing with their situation.

Herschel – who always had some sanctimonious crap to say – took it one level beyond, refusing to kill the zombies because of some twisted belief that they were still human. Talk about liberal hubris – the new Soviet man is a drooling monster who gets convinced not to dine on you.

Naturally, this led to tragedy after Rick stupidly decided to humor his idiocy. You know Herschel had an Obama sticker on his tractor. And don’t get me started on Dale. But that nonsense is all gone this season.

The crackerjack opening sequence in the season premiere last week demonstrates without a doubt that the survivors have left their liberal baggage behind, embracing the world as it is and not as they wish it to be. 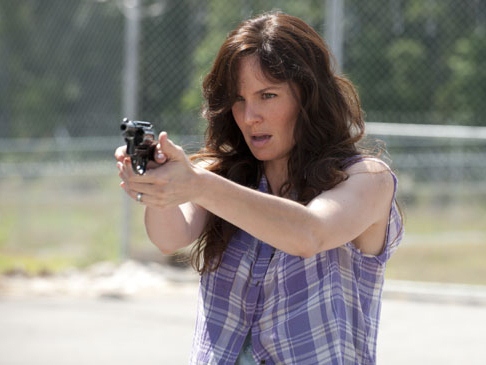 The door to a house is kicked open and Rick immediately guns down a zombie without a second thought – using a sound suppressed pistol like anyone with common sense would. The survivors, everyone knowing their place and their task, systematically and ruthlessly clear the house. There’s no chitchat. Herschel isn’t sounding off from his pulpit on Mount Sanctimony.

The racist hick? He’s now the backbone of the group, his skills and savvy recognized and respected. Even Rick, who’s dithering during the last two seasons made being around him riskier than grabbing a ride home from a beach party with Teddy Kennedy, has started to man up. Just ask the convict survivors the group later discovers at the prison after Rick deals with them.

And little Carl – the kid whose poisonous mother Lori used to whine about being armed – dispatched a ghoul with his own silenced pistol. The suburban mom mortified by guns is gone – though she’s still a useless pain.

Later, they conduct another blitzkrieg when securing a prison yard, planning and executing – with speed and overwhelming force – a lethal assault on the zombie occupiers. And when they afterwards gather around the fire this time, Rick is providing security.

It’s remarkable how much better a zombie show is when it actually has zombies. People used to say a conservative is a liberal who’s been mugged. It’s apparently also someone who’s been attacked by zombies.

The characters (and the show itself) are dealing with the world as it is. Reality has won. Its many liberal fans won’t like it, and its writers would no doubt deny it, but as  long as the show stays on course and doesn’t turn back, it will be good to go.

“The Walking Dead” is finally alive, and that’s because it has gone conservative.