Watching the most recent presidential debates might have given Emily Blunt second thoughts about becoming an American citizen, but her latest movie, “Sicario,” a compelling, disturbing, and harrowing story about the Drug War set along our southern border, plays like a two-hour campaign ad for Republican presidential frontrunner Donald Trump.

Events open just outside of Phoenix, Arizona. Blunt plays Kate Macer, an idealistic F.B.I. agent losing more and more ground everyday in her fight against the stream of drugs and death coming across America’s criminally unguarded southern border. A suburban American home filled with dead bodies and an IED push Kate to a place where she’s willing to  join up with Graver (Josh Brolin), a shady American operative from a — ahem — undisclosed agency who’s been brought in to shake things up.

For reasons that never make much sense, Kate is immediately wary of Graver and especially his quiet watchful associate Alejandro (Benicio Del Toro). For most of the movie this never makes much sense. For example, even though Graver and the Texas Rangers are working with the Mexican police, she still accuses them of violating international law after a (superbly tense) shootout on the Mexican side of the border crossing — a shootout the Americans did not start. 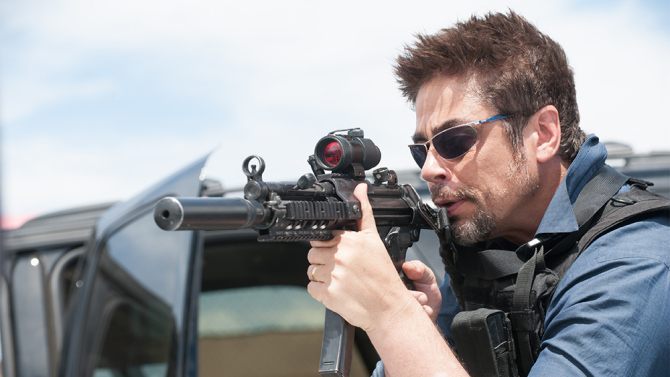 Other than to gin up conflict, Kate’s ongoing moral conflict with Graver is nonsensical. I understand wanting to sustain the drama of Kate as an outsider. And I certainly understand left-wing Hollywood’s desire to portray America as a corrupt part of the world’s problems, as a moral equivalent to Mexican drug lords. All I’m saying is that it would help if the same movie making this statement made some sense of it.

In the end, naturally, there’s a big reveal to back up Kate’s suspicions. This reveal does not, though, explain all the unfounded suspicions that came before.

To the film’s credit, this major plot hole does nothing to diminish an otherwise powerful story skillfully executed. The real star is the mood and tone. On both sides of the border, cinematographer Roger Deakins does an Oscar-worthy job of creating a desolate, foreboding, almost lunar landscape. This is a No Man’s Land, and when combined with the outstanding staging of director Denis Villeneuve’s action sequences and a methodical pace, a beautiful sense of dread hovers over every moment. 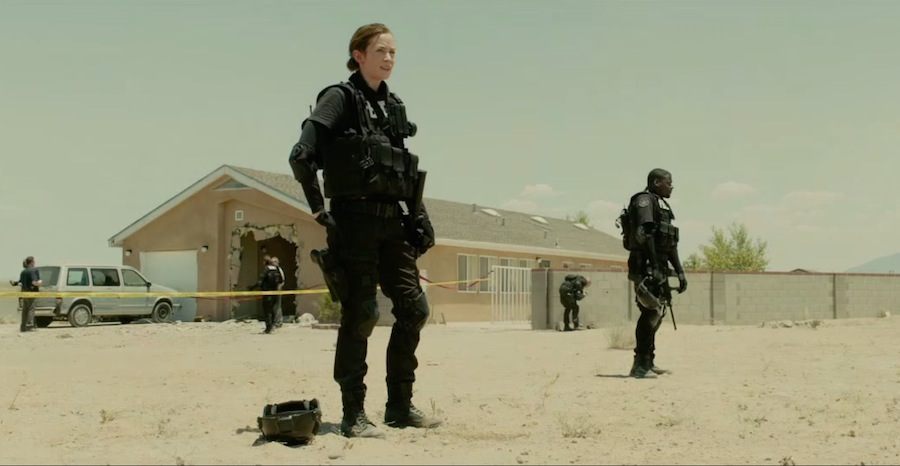 The acting is just as good. Physically, Blunt might be tiny but her presence removes any doubt about her capabilities. Brolin knocks his smiling rattlesnake of a spook out of the park. Del Toro’s quiet, hulking, solemn, menacing, competent, incessant presence is what truly that anchors “Sicario’s” emotional core.  Alejandro is a mystery you very much want to unwrap, and the reveal is well worth the wait.

Although it obviously was not the filmmakers’ intent, “Sicario” is primarily a cautionary tale about the completely unnecessary and tragic effects of an open border. As unsettling as anything else are the aerial shots that reveal what this country laughably calls a wall.

Despite its reactionary right-wing politics, “Sicario” is exceptional in every way, better than Steven Soderbergh’s “Traffic,” one of the best of the year.