President Donald Trump’s star on the Hollywood Walk of Fame was vandalized yet again Sunday morning during the Los Angeles Gay Pride and “Resist” March.

Trump’s star — which has been vandalized several times since the beginning of his presidential run — was photographed Sunday morning covered in stickers bearing slogans including “Resist Homophobia” and “No! Drive out Pence/Trump fascist regime!” 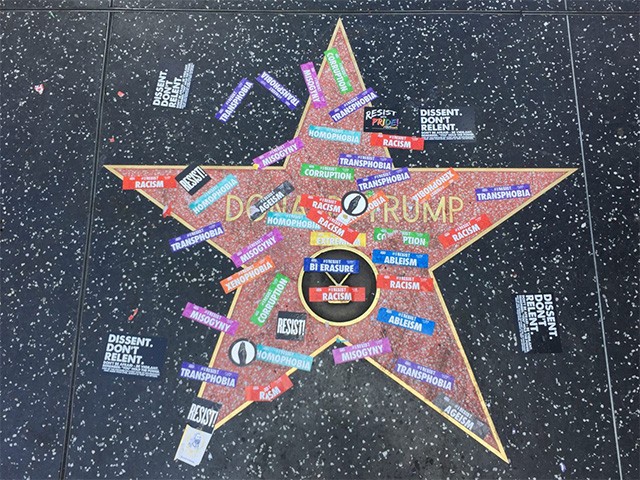 In October, Los Angeles man James Otis completely destroyed the star when he repeatedly struck it with a pick-ax in a pre-dawn incident that was captured on film by Deadline. Otis struck a plea deal with prosecutors in February that saw him avoid jail time in exchange for paying $4,400 to the Hollywood Chamber of Commerce and the Hollywood Historic Trust.

The star — which Trump was honored with in 2007 for his work producing the Miss Universe pageant and for his hit NBC reality television show The Apprentice — has previously been covered in swastikas and vulgar language.

In May, an unidentified person placed a golden toilet at the site of the star, with a message scrawled atop the toilet tank that read, “Take a Trump!”

The site of Trump’s star has become a rallying point for both pro- and anti-Trump forces in the wake of Trump’s election. Trump supporters previously gathered at the star to celebrate the Republican businessman’s victory over Hillary Clinton in November.