Kathy Griffin took to Twitter Thursday to apparently confirm that she has been interviewed by the U.S. Secret Service over a shock photograph published in May in which she held up a fake, bloodied head meant to resemble that of President Donald Trump.

The apparent confirmation comes after journalist Yashar Ali reported this week that the Secret Service had interviewed Griffin for over an hour in person, and that the investigation into the photograph remained open more than a month after it was first published by entertainment gossip outlet TMZ.

News: Kathy Griffin has been interviewed by the Secret Service, in-person, for over an hour….investigation still not closed.

Dmitry Gorin, the criminal defense attorney representing Griffin, told the New York Times in June that the comedian was cooperating with the Secret Service investigation. Gorin also defended Griffin’s stunt, saying publishing the photo of a decapitated President Trump was protected under the U.S. Constitution.

“She basically exercised her First Amendment rights to tell a joke,” Gorin told the Times. “When you look at everything in the media, all the times entertainers make videos or express themselves in other ways, you’ve never seen an entertainer, let alone a comedian, be subject to a criminal investigation.”

The photograph, originally published by TMZ and taken by Los Angeles-based photographer Tyler Shields, sparked an immediate backlash after it went viral in May. (TMZ/Tyler Shields) 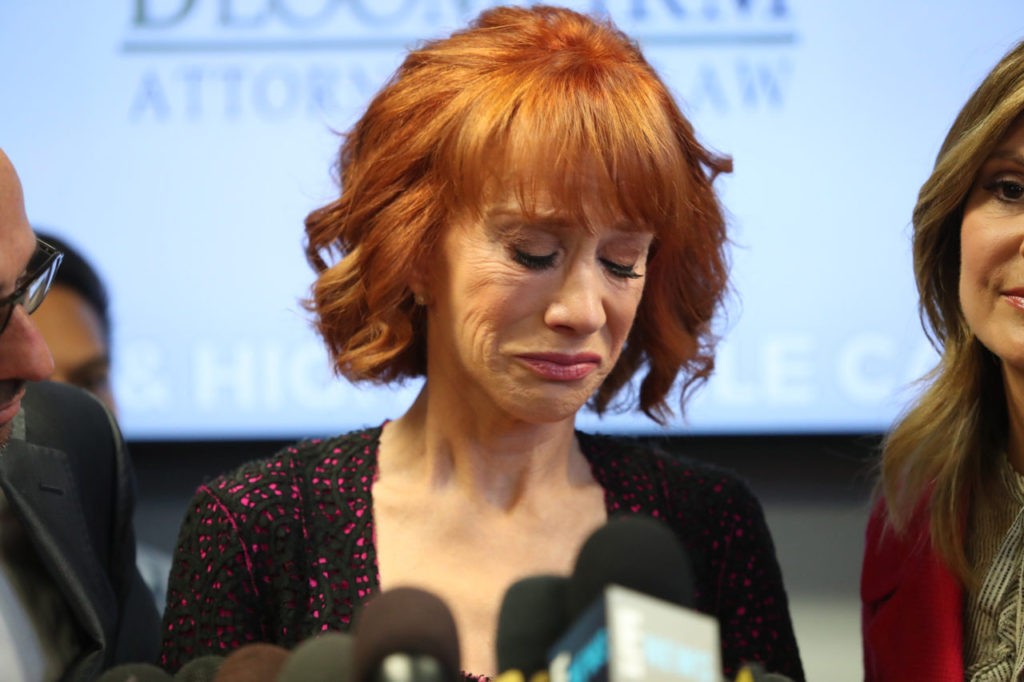 The USSS probe into Griffin was widely reported in May, while TMZ  reported that the Secret Service had launched an investigation into “the circumstances surrounding the photo shoot.”

Fallout from the photo, however, had already began. Several social media users called for a boycott of Griffin’s cross-country comedy tour, while CNN fired her from her role on the network’s annual New Year’s Eve broadcast, which she had co-hosted along with Anderson Cooper since 2007.

President Trump tweeted that Griffin “should be ashamed of herself” and that her photo had been difficult for his children, including his 11-year-old son, Barron.

Kathy Griffin should be ashamed of herself. My children, especially my 11 year old son, Barron, are having a hard time with this. Sick!

The 56-year-old My Life on the D-List comedian had initially apologized in a now-deleted Twitter video, saying she had “crossed the line” and that the image had gone “too far.”

By June, Griffin had gone from apologetic to emotional and defiant. In a press conference, a tearful Griffin told reporters that the Trump family had tried to “ruin” her in the wake of the controversy and vowed to continue to mock President Trump.

“I don’t think I will have a career after this. I’m going to be honest, he broke me,” Griffin said standing next to attorney Lisa Bloom.

“If you don’t stand up, you get run over,” Griffin said. “What’s happening to me has never happened ever in the history of this great country. Which is that a sitting president of the United States and his grown children and the First Lady are personally, I feel, personally trying to ruin my life forever.”

“He picked me, I’m the easiest target,” she continued.

At one point, the comedian blamed criticism of her photo on sexism, saying “It’s a bunch of white guys trying to silence me. This wouldn’t be happening to a guy. This is a woman thing.”

It was at the press conference that another attorney for Griffin confirmed the Secret Service had opened an investigation into the circumstances surrounding the photo shoot.