The Chappelle special has received a total of five critic ratings on Rotten Tomatoes, almost all of which consider it a bust. 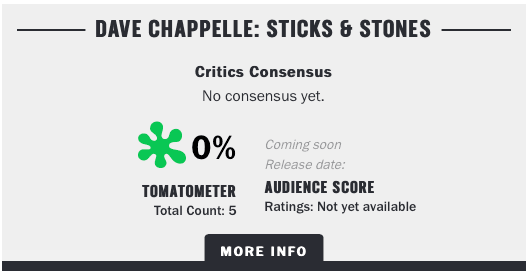 Slate’s Inkoo Kang, a “top critic” for Rotten Tomatoes, said Chappelle’s special is “Like dropping in on a rascally uncle who doesn’t know, or doesn’t care, how much he’s disappointing you.”

Alison Herman of The Ringer also criticized the special and said, “Sticks and Stones is designed to generate inflammatory coverage… It’s a symbiotic cycle with no end in sight, and it’s become the last thing a beloved provocateur should ever want to be: predictable.”

“Sticks & Stones is terrible, and [Dave] Chappelle can only blame himself for that,” another reviewer wrote.

Chappelle, who currently faces scrutiny from those who find fault in his material, called out America’s growing “cancel culture” during his Netflix special, saying “everybody’s doomed.”

“Uh, Duh… Hey, der, if you do anything wrong in your life, and I find out about it, I’m going to try take everything away from. I don’t care what I find out. It could be today, tomorrow, fifteen, twenty years from now — If I find out, you’re fucking….duh…finished,” Chappelle said, before asking the audience to guess who he was impersonating.

“That’s you,” Dave Chappelle said. “That’s what the audience sounds like to me!”

“That’s why I don’t be coming out doing comedy all the time because y’all niggas is the worst motherfuckers I’ve ever tried to entertain in my fucking life. Goddamn sick of it. This is the worst time ever to be a celebrity. You’re going to be finished, everybody’s doomed!” Chappelle added.

Among the many who have decided to take aim at Chappelle, the Daily Beast claimed Chappelle’s jokes are “problematic:”

Hart was clearly joking when he wrote those incendiary tweets, Chappelle says, wrapping what happened to the comedian into his own problematic history joking with and about the LGBT community. He’s not so much reflecting a blind spot he’s had when it comes to those issues, but actually shining a spotlight on his controversial approach. “You are never, ever allowed to upset the alphabet people,” before launching into a set that risks doing just that—but also might be championed by the more self-aware of the community.

Last month, Rotten Tomatoes said it had added more than 600 new critics to its review platform in the past year, more than half of which were women.