Harrison Ford has gone from trashing America to trashing its president. The actor appeared on Jimmy Kimmel Live! Monday night to promote his new Disney movie Call of the Wild and called President Donald Trump a “son of a bitch.”

Kimmel held up a fake promotional poster showing fake reviews for Ford’s new film. The reviews were attributed to Donald Trump. One of them read, “It was a perfect call,” which alludes to how President Trump described his call last summer with Ukrainian President Volodymyr Zelensky, a call that pretty much sparked the Democrats’ impeachment campaign to oust the president. 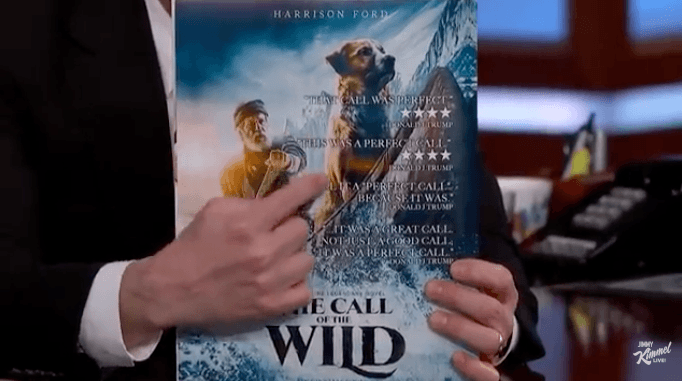 “That’s the first thing that son of a bitch has done for me — ever,” Ford said as the audience erupted in laughter.

“Our position in the world is tenuous because of our lack of moral leadership, basically,” Ford said. “I certainly applaud Greta [Thunberg]… her activism, her role in representing the interests of young people, and I admire her courage, her fortitude, and also admire her capacity to express herself.”

“Science is being ridiculed by people in ideological campgrounds,” Ford said. “They are refusing the wisdom, the discipline of science, in favor of a political point of view. And that has to stop. And I believe young people throughout the world know that it has to stop and are capable and willing to make the sacrifices to make that happen.”