Hollywood actress Frances Fisher posted an inflammatory tweet this week calling for a “race war” in apparent response to the death of George Floyd who was arrested by former Minneapolis police officer Derek Chauvin, who was seen on video putting his knee on Floyd’s neck. The Titanic and HBO’s Watchmen star also quoted convicted cop killer Assata Shakur before deleting the tweet.

“They want a race war. We’ll give them a race war,” Frances Fisher wrote on Tuesday, according to an archived screenshot of the deleted tweet. She also expressed her support for the Black Lives Matter movement. “I’m with #BlackLivesMatter. We will win.” 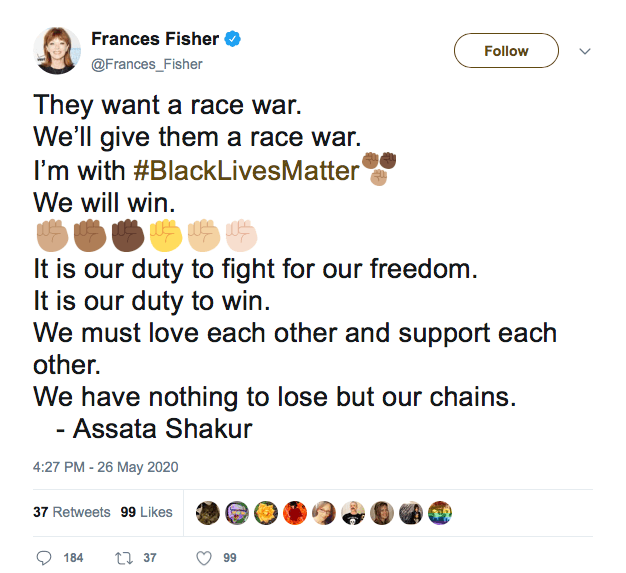 The actress then quoted Assata Shakur, a member of the Black Liberation Army who murdered New Jersey State Trooper Werner Foerster in 1973.

Fisher, who played Kate Winslet’s mother in Titanic, also appeared to indirectly blame President Donald Trump for the death of George Floyd, claiming that the Trump administration is encouraging white supremacy. The actress was responding to a tweet from former presidential candidate Marianne Williamson calling for an investigation into Floyd’s death.

It’s white supremacy acting out – encouraged by the trump administration.

The actress has also called on Twitter CEO Jack Dorsey to shut down President Trump’s Twitter account, saying that anything less would be “suspect.” She added that Dorsey’s refusal so far means that “@jack must be a #republican.”

What happened? Did @jack @Twitter finally shut down @potus?
Anything less than that is suspect.

Jack Dorsey has the power to change the trajectory of this election, were he to shut down @realDonaldTrump for the multitude of violations already documented. @jack must be a #republican.