Singer and actress Cher has lashed out at Sens. Joe Manchin (D-WV) and Kyrsten Sinema (D-AZ) Monday after Manchin announced he will vote against the so-called “For the People Act” — then deleted her post declaring them “traitors” because she mistakenly named Sen. Kirsten Gillibrand (D-NY) instead of Sinema.

Joe Manchin & Kirsten
Gillibrand Aren’t Democrats They’re TRAITORS.If There Is Any Way 4 NEW YORKERS 2 KICK HER OUT OF SENATE They Must Try Be4 She Hands Our Country 2 trump & His Criminals. These Fake Democrats Are Single Handedly Sabotaging PRES.BIDEN’S Plans 2 Help🇺🇸’n Ppl 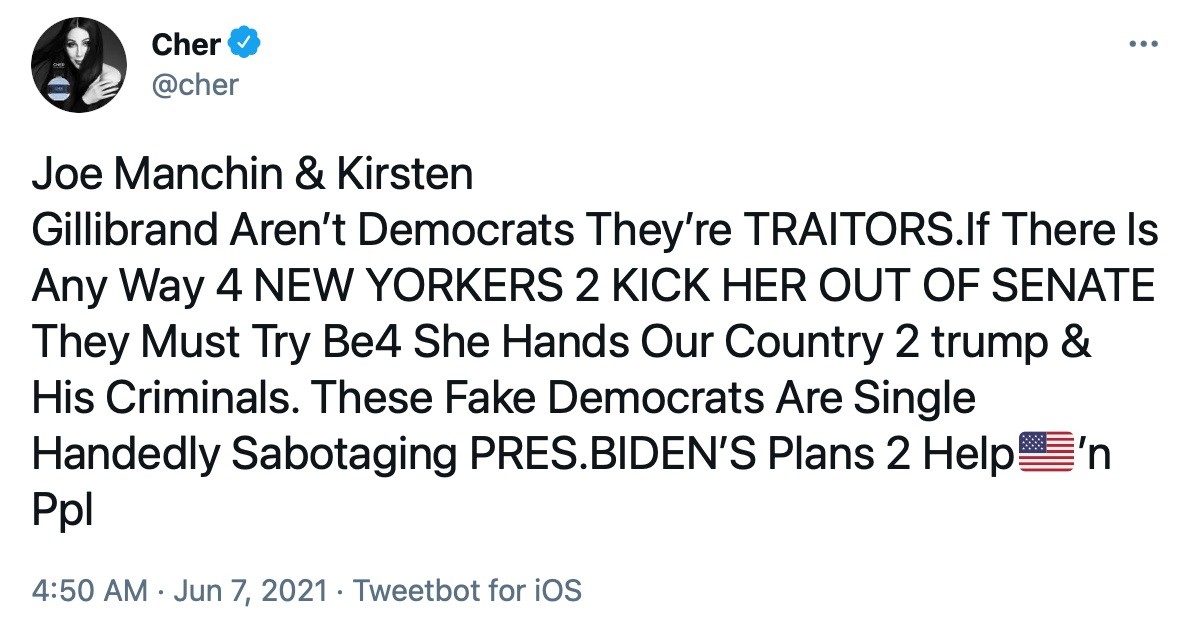 As Breitbart News reported, Manchin announced Sunday he will vote against the For the People Act to federalize local elections.

“I believe that partisan voting legislation will destroy the already weakening binds of our democracy, and for that reason, I will vote against the For the People Act. Furthermore, I will not vote to weaken or eliminate the filibuster,” he wrote in Charleston Gazette-Mail.

Like Manchin, Sen. Sinema has stated she won’t budge in her support of the Senate filibuster, a decision that would hurt President Biden’s efforts to ram his left-wing agenda through Congress. As Breitbart News reported, Sinema recently said the filibuster “protects the democracy of our nation” and forces bipartisan solutions.

I Must Offer My Deepest Apologies To NEW YORK
SENATOR KIRSTEN GILLIBRAND.When I Wrote txt I Made Grave Error Of Confusing Her With Senator Kyrsten Sinema.Again My Most Sincere Apologies To
SENATOR GILLIBRAND,
& PPL Of NEW YORK.

Cher endorsed Joe Biden in last year’s presidential election, albeit unenthusiastically. She has recently used Twitter to smear Republicans as white supremacists and falsely accused the GOP of only allowing white people to vote.