Broadway’s theater owners and operators announced Friday they will require theatergoers to be vaccinated against the coronavirus and wear masks to attend performances. “The policy, announced just days before the first Broadway play in more than 16 months is to start performances, allows children ineligible for vaccination to attend shows if tested for the virus,” the New York Times reported.

However, some venues in New York said they will take it a step further, the outlet said, adding, “the Metropolitan Opera, which hopes to reopen in late September, and Carnegie Hall, which is planning to reopen in October, are not only planning to require vaccinations, but also to bar children under 12 who are not yet eligible to be vaccinated.” 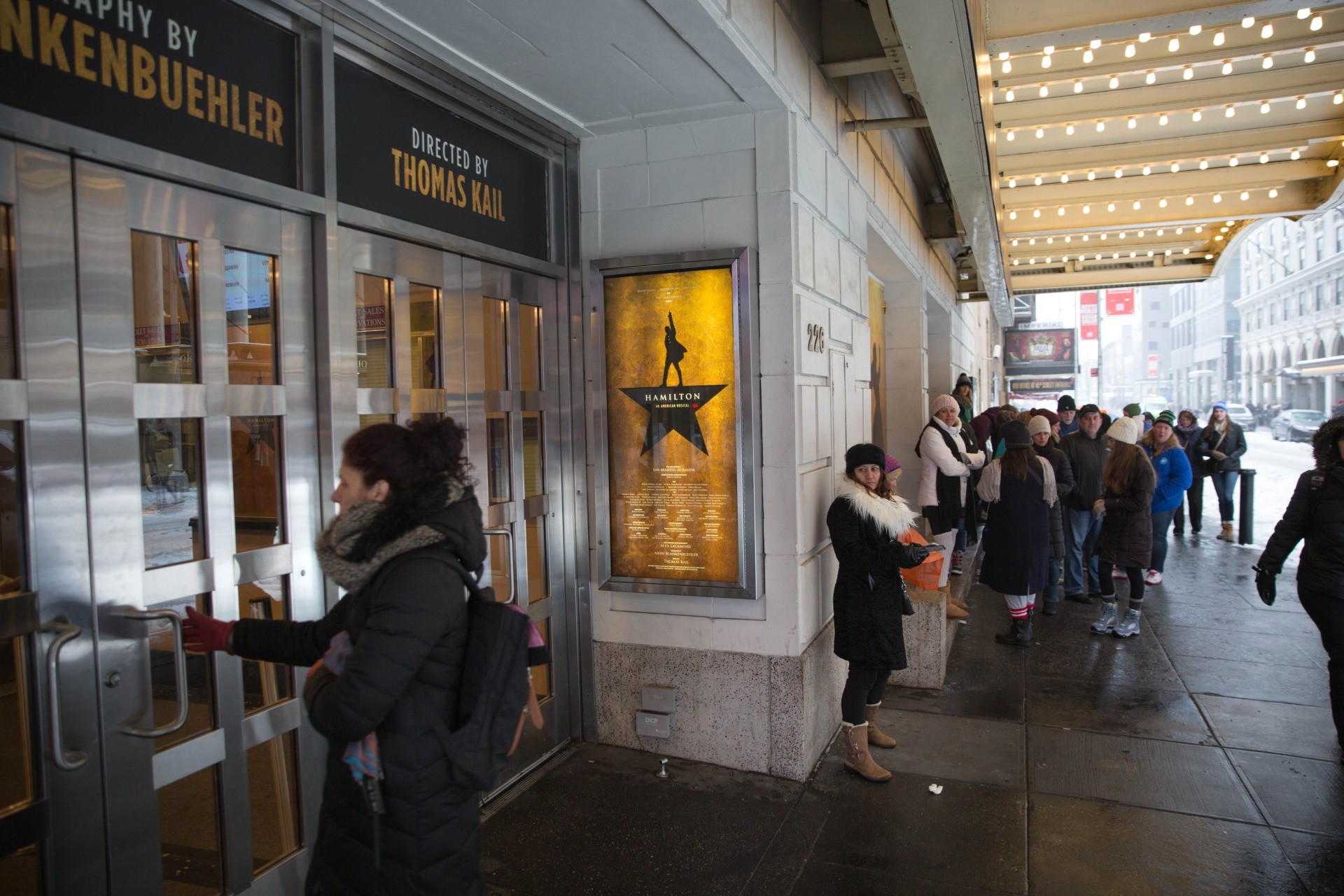 People wait in front of the Richard Rodgers Theatre, where “Hamilton” is performed, near Times Square during a day of heavy snow and freezing rain on March 14, 2017 in New York City. Many Broadway productions remained open despite the inclement weather. (Kevin Hagen/Getty Images)

The Broadway rules will be in place until at least October and require audiences to wear masks except when they are eating and drinking.

“The Broadway vaccination mandate will apply not only to audiences, but also to performers, backstage crew and theater staff. There will be limited exceptions: ‘people with a medical condition or closely held religious belief that prevents vaccination,’ as well as children under 12, can attend with proof of a recent negative coronavirus test,” the Times article read. 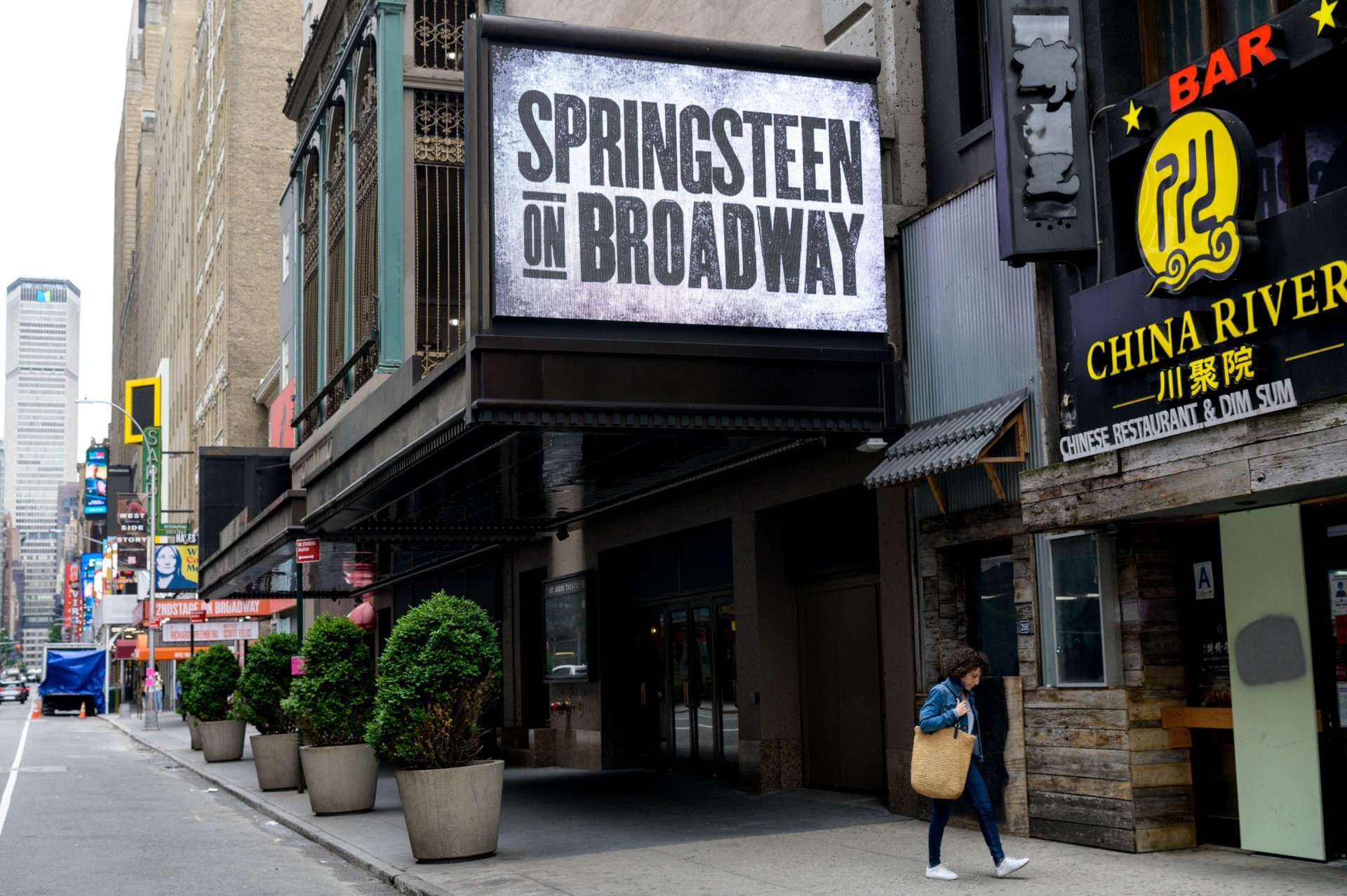 People walk past the St. James Theatre after it announced Bruce Springsteen’s return to Broadway on June 26th with ‘Springsteen on Broadway’ on June 11, 2021 in New York City. – Many restrictions aimed at curbing the spread of the virus have been lifted, and New York state governor Andrew Cuomo said that most of the remaining measures would be eliminated once 70 percent vaccination is achieved. (ANGELA WEISS/AFP via Getty Images)

The Broadway League shared the announcement on its Twitter page.

The owners & operators of all 41 Broadway theatres in New York City have announced a vaccination and mask policy for audiences in effect through October 31, 2021.https://t.co/X4XU5sKXmH pic.twitter.com/XJ9SoL9Xox

Bruce Springsteen’s Broadway show, Springsteen On Broadway, experienced a protest when it reopened in June as fans voiced their disgust that producers banned the unvaccinated from attending, Breitbart News reported:

When the show re-opened after going on hiatus over the coronavirus, audience members were faced with a new requirement. To enter the St. James Theater, fans are now required to present proof that they have been fully vaccinated for the coronavirus. The protest remained peaceful, even though demonstrators exchanged some occasional words with the fans waiting in line.

In addition, Netflix has reportedly become the first Hollywood studio to require coronavirus vaccinations for actors working on its U.S. productions, according to Breitbart News. Disney World and Disneyland reinstated an indoor mask mandate on Friday for all guests and employees regardless of vaccination status.