Moonfall is as sexless as Leave it to Beaver. It is so sterile, such a violation of human nature, and self-consciously so, it feels awkward.

Why plop an actress as jaw-droppingly gorgeous as Halle Berry into a piece of disaster-epic cheese and waste her in this way? Berry is a solid actress, no question, but WTF? 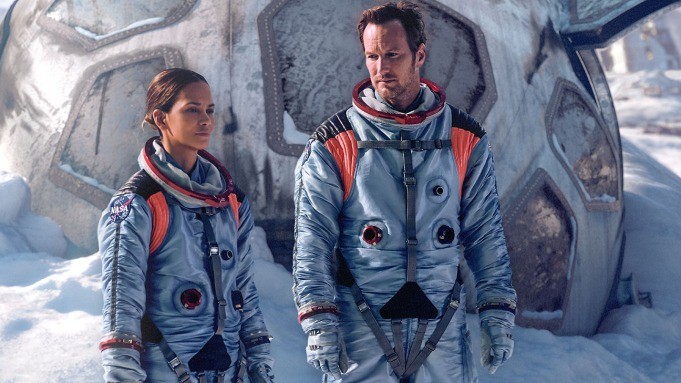 We get nothing from Moonfall that resembles even the smallest acknowledgment of human sexuality. No one acknowledges Berry’s stunning looks. No one does a double-take. Even though she and co-star (Patrick Wilson) both play characters who are divorced, there are no sparks, no banter, no nothing, even with all the heightened emotions around the end of the world.

There’s no cleavage, no leg shot, no shot of an underwear-clad Berry stepping into a spacesuit, and no wish-fulfillment romance between her and Wilson.

What the hell are we doing to ourselves? I’ll tell you what we’re doing. We’re censoring and destroying our own art to appease the sexless Nazis in China. Hollywood and its artists are eagerly whoring out their artistic integrity, hoping China will accept ready-made propaganda into their theaters.

The China appeasing doesn’t even stop there…

After the American government has pretty much given up on saving the world, a bizarre piece of exposition informs us that China is sending help. Oh, and then there’s Chinese actress Kelly Yu who teaches Berry’s young son to speak Chinese in-between all of her brave heroics.

Good heavens, even in the heightened days of the Production Code, movies were not sexless and sterile. I kid you not… This is not hyperbole… Abbott and Costello never made a movie as weirdly sexless as Moonfall.

An industry that once took great (and deserved) pride in ridding itself of the Production Code is now bending over as quislings for the Nazis in China.

What a humiliation for all involved.

And the sad thing is that other than his hermetically sealed world where no one has hormones, Moonfall isn’t half bad. It’s dumber than Joy Behar and saddled with some of the worst dialogue you’ll hear outside of a 19-year-old playwright, but the story zips along, offers a few surprises, and a whole lot of money shots: floods, fires, flaming comets, etc. There’s even something called a “gravity wave,” which was pretty cool.

The moon goes out of orbit. K.C. Houseman, a conspiracy theorist who believes the moon is a mega-structure built by aliens,  is the first to discover this. Naturally, no one will listen to him, including disgraced astronaut Brian Harper (Wilson). Eventually, NASA catches on and it’s up to Deputy Director Berry to save the day. But she’s blocked at every turn. What’s going on? How can this be?

Well, in a one-shot role that harkens back to his unforgettable work in Oliver Stone’s JFK, Donald Sutherland wheels in to explain the conspiracy, which sends Berry off to get the job done.

On the ground, Berry’s and Wilson’s loved ones struggle through exploding comets and rednecks to find safety.

At the halfway mark, the movie manages to just barely avoid shitting the bed with a ludicrous plot turn… But ludicrous is half the fun.

Everything is green-screened to death. Everything is CGI’d to death. The relationships are just as artificial. Nevertheless, Moonfall is never boring and manages to do a whole lot in just 130 minutes.

If only Moonfall had been made by human beings and artists instead of Nazi appeasers.