That’s a 55 percent drop from four years ago when 16 million tuned into the opening night coverage of the 2018 Winter Games in South Korea.

That’s also down a whopping 64 percent from the 2014 Summer Games.

These numbers are beyond a catastrophe, especially after NBC’s Summer Olympic Games in Tokyo last year also earned record low ratings. Those Olympics were widely ridiculed as the Woke Olympics. America tuned that fiasco out because of all the obnoxious left-wing politicking, virtue signaling, and propaganda — most of it performed by smug athletes who failed to win any medals.

At the time, the corporate media tried to gaslight the public into believing the off-putting woketardery had nothing to do with the ratings crash. Instead, they spread a bunch of wild-eyed misinformation, blaming the lack of interest on the China Flu delaying the games for a year — which is laughable. The one-year delay should’ve increased anticipation. What’s more, during the summer of 2021, millions of Americans were still hiding out at home from the pandemic.

Gee, I wonder what the corporate media’s excuse will be for NBC’s record low Genocide Games’ ratings?

These Games weren’t delayed, so what’s it gonna be, you godless liars?

Even including concurrent primetime coverage on USA Network — 512,000 viewers — the average of 7.78 million would still mark an all-time low. An across-all-platforms figure that includes NBC’s various streaming platforms will be provided here when it is available.

Figures do not include NBC’s first half-hour of coverage, which was modestly higher at 8.11 million viewers (which would still mark an all-time low).

China is run by a bunch of Nazis who are, among many other atrocities, responsible for killing nearly a million Americans, along with our economy. And still, one of our broadcast networks, NBC, is over there shilling for these Nazis. And let’s not forget how China has corrupted our politics, a web of corruption that goes straight into the White House. 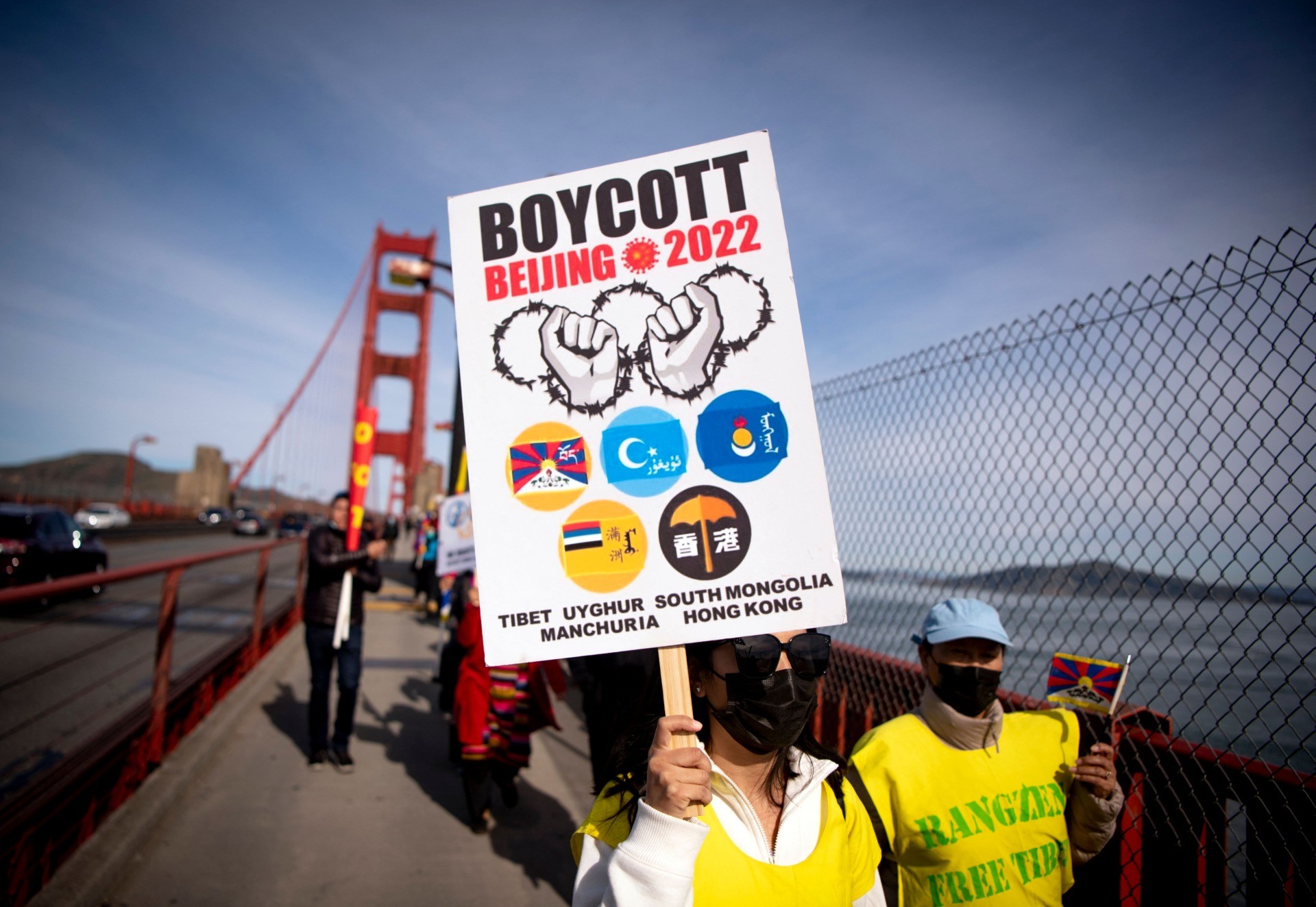 A protester holds up a “Boycott Beijing 2022” sign after marching across the Golden Gate Bridge during a demonstration against the 2022 Beijing winter Olympic Games, in San Francisco, California on February 3, 2022. (JOSH EDELSON/AFP via Getty Images)

Thanks to New Media, though, the corporate media cannot hide its complicity in the horrors committed by China’s Nazis. Thanks to new Media, the American people are now informed enough to be disgusted by the idea of countless American corporations legitimizing this evil with sponsorship, coverage, and outright propaganda.

You know, the America I grew up in, the America where the political class, media, and Hollywood came together to shame South Africa into ending apartheid, is no more. We, the people, haven’t changed. If nothing else, these ratings prove we’re still disgusted with genocidal tyrants. But our elites have been wholly corrupted and purchased by China’s Nazis — from congress to sports to Hollywood.