Speaker of the House Nancy Pelosi (D-CA), once a fervent critic of the Chinese Communist Party, changed her tune as ties to Beijing enriched her family, bestselling author Peter Schweizer reveals in his new book Red-Handed: How American Elites Get Rich Helping China Win.

Pelosi’s stance perhaps changed most rapidly during the debate over the 2008 Beijing Summer Olympics, an event human rights activists decried as a travesty given China’s extensive record of atrocities against its own people. Opponents of the Games argued at the time that granting China such a tremendous honor and showcase for the Communist Party would embolden it to commit even greater horrors.

A year later, China sent paramilitary troops to crush a peaceful protest by members of the Uyghur community of East Turkistan, killing dozens and setting in motion the events that would lead to dictator Xi Jinping currently presiding over concentration camps that, at their peak, were estimated to imprison as many as 3 million people. 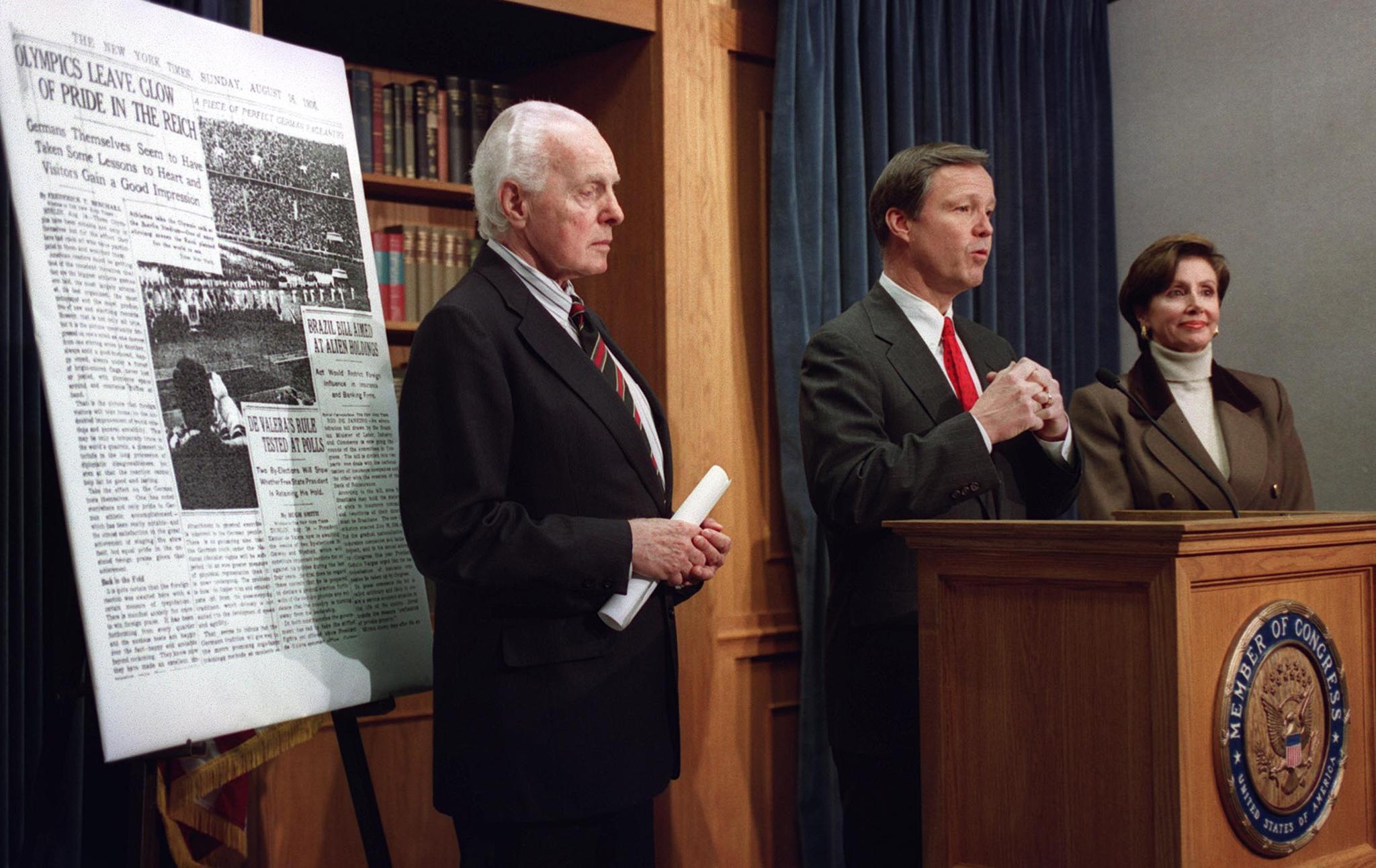 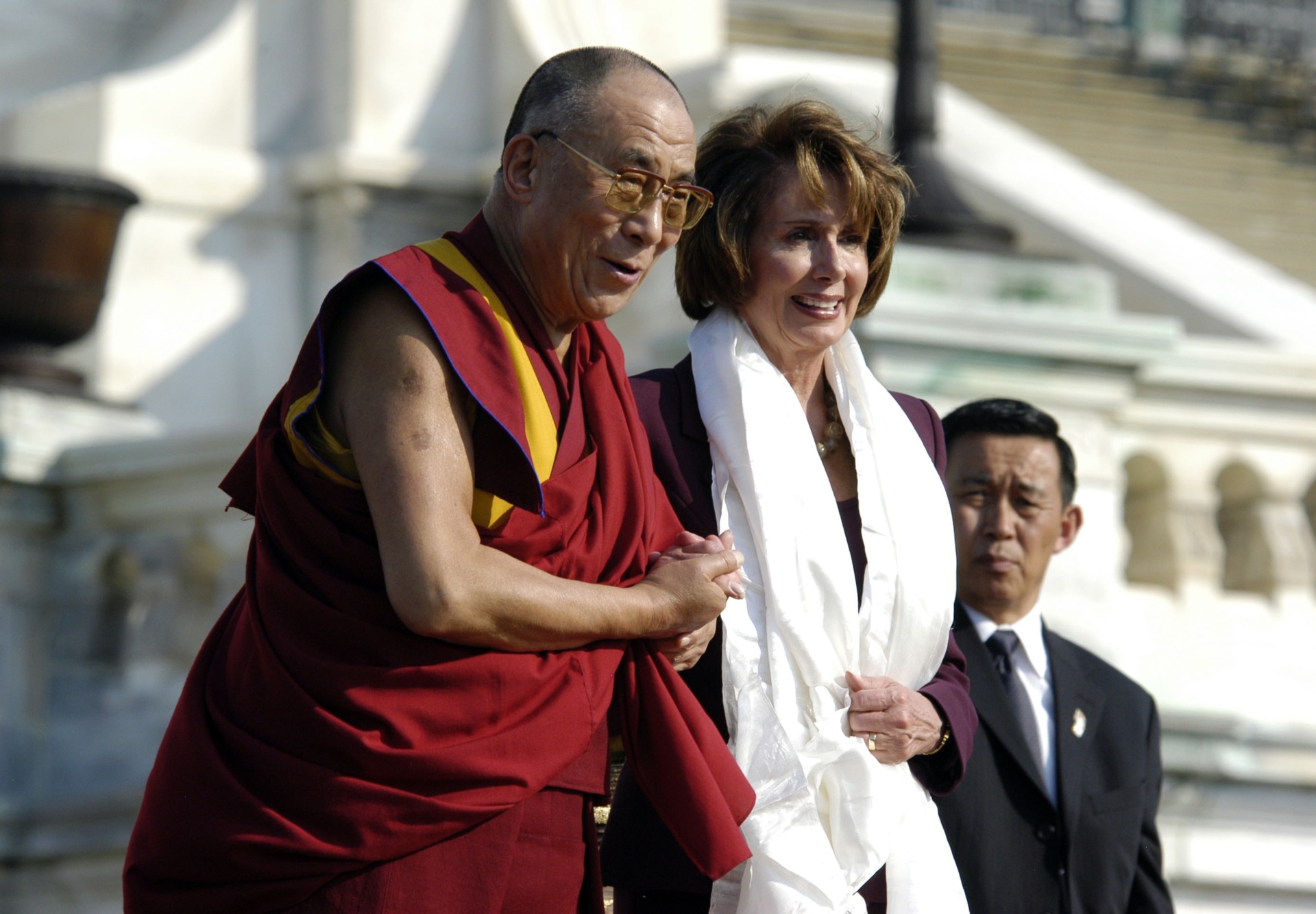 The Dalai Lama poses with House Speaker Nancy Pelosi (D-CA) before speaking in front of the U.S. Capitol on October 17, 2007. (Stephanie Kuykendal/Getty Images)

Early in her career in Congress, Pelosi was one of the most vocal anti-Beijing voices in Washington, Schweizer writes. Pelosi so opposed the Communist Party that she protested against the Tiananmen Square massacre in Tiananmen Square.

“In 1991, as a junior member of Congress, Pelosi found herself in Tiananmen Square. She was part of a congressional delegation visiting Beijing barely two years after the horrific events had unfolded,” Schweizer writes. “Pelosi … covertly carried a banner into the middle of the square and unfurled it in front of a small crowd and the media. ‘To those who died for Democracy in China,’ it read.” 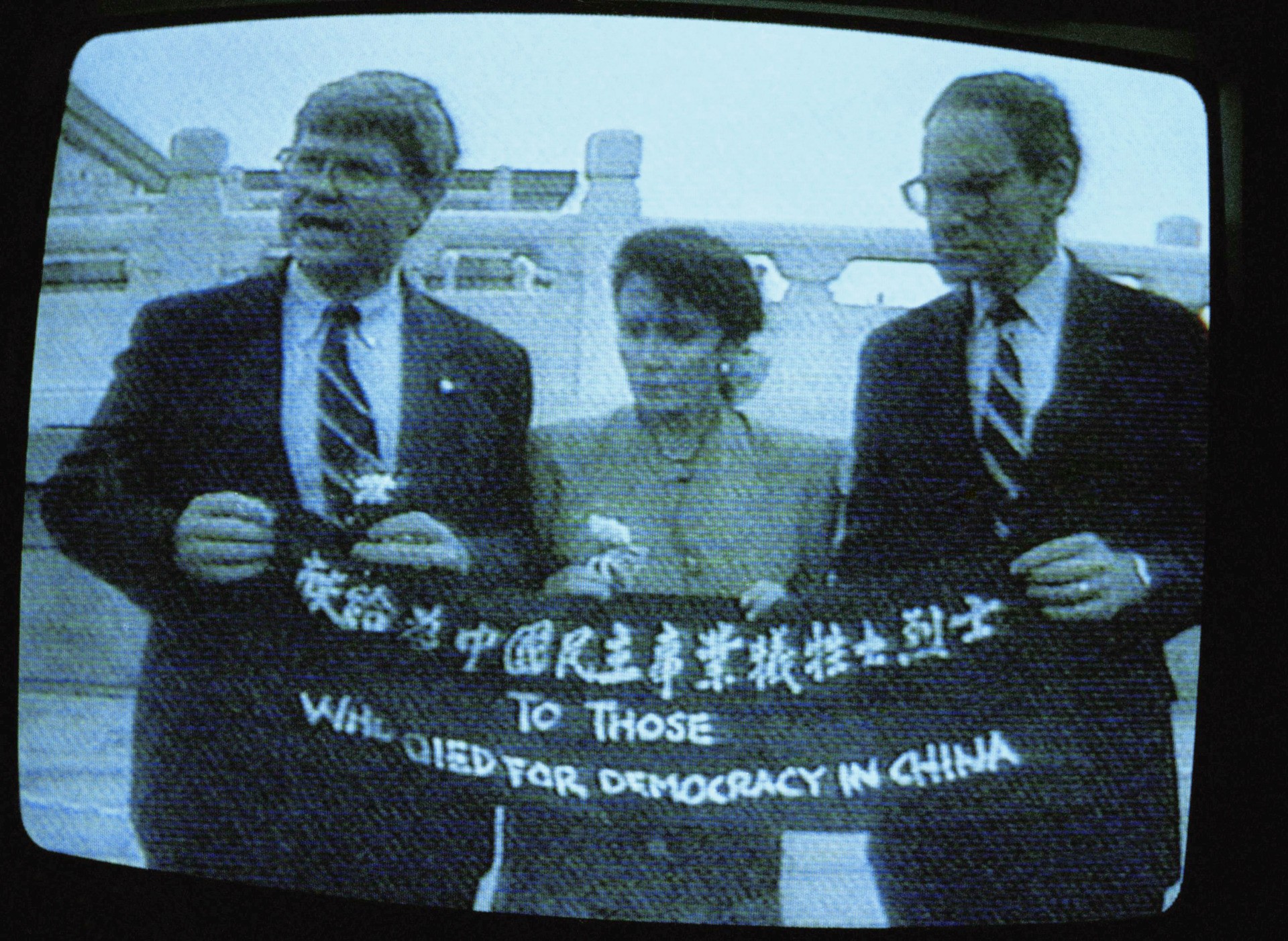 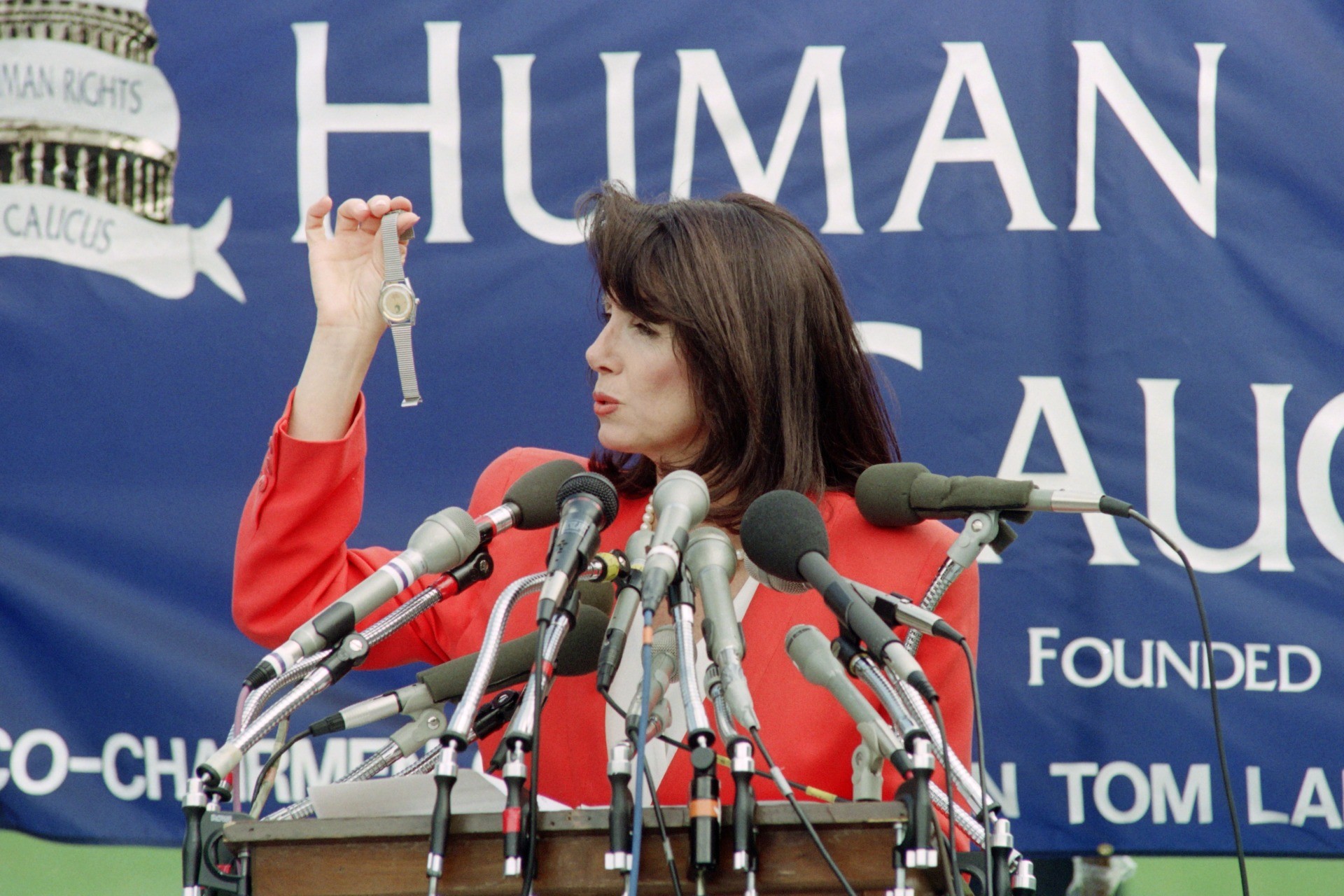 Speaking at a rally at the U.S. Capitol on June 4, 1991, to commemorate the Tiananmen Square massacre, Rep. Nancy Pelosi (D-CA) holds up a watch smuggled out of China. Pelosi said these watches were given to soldiers who helped crush the Tiananmen Square pro-democracy protesters. (CHRIS ASSAF/AFP via Getty Images)

Husband Paul became a partner investor in Matthews International Capital Management, a pioneer in the Chinese investment market. He also invested in several other companies whose success depended upon business with the Chinese Communist Party.

“In Congress, Pelosi had initially been critical of China hosting the games, arguing that its human rights record should prevent it from such an honor,” Schweizer writes. “The year after her husband bought shares in Global Ambassador Concierge, she reversed course and opposed a boycott of Beijing’s hosting of the games.”

Two years later, according to Red-Handed, “the Pelosis held between $5 million and $25 million in a Matthews fund ‘specializing in Asian investment.’ Paul Pelosi received partnership income between $100,000 and $1 million.” 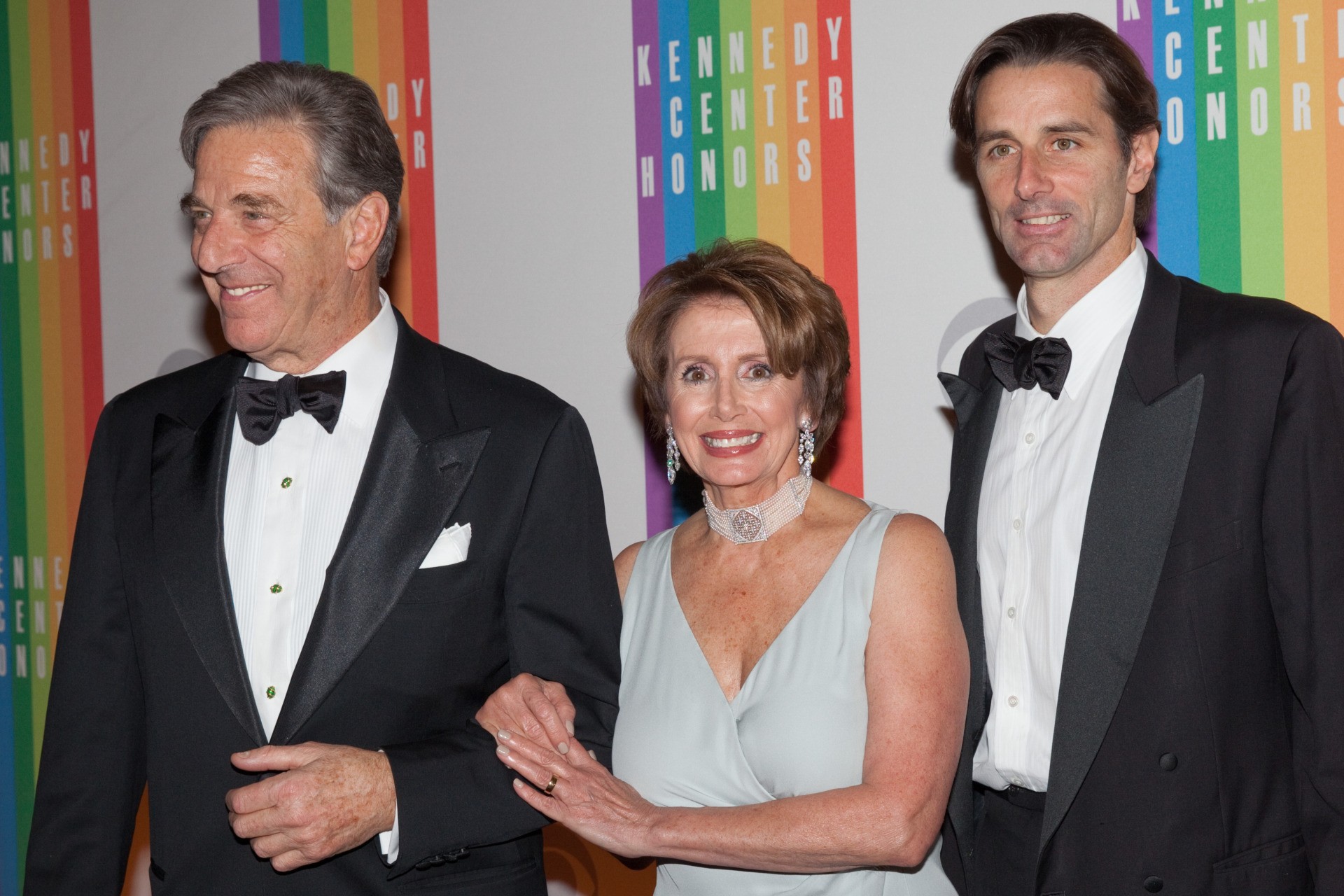 Today, Pelosi faces much the same situation: a session of the Olympic Games in Beijing, opposed by a large contingent of human rights activists who fear that China’s repression may increase even further after two weeks of global adulation. Unlike last time, the 2008 Summer Games precedent lends heightened credibility to these concerns.

Pelosi has opposed calls to authentically boycott the 2022 Beijing Winter Olympics, asserting, “We must support and celebrate our athletes.” She has instead supported a “diplomatic boycott” of the event. A “diplomatic boycott” is not a boycott, as diplomats do not compete in the Olympic Games.

“As one united international community, we have the opportunity and responsibility to hold Beijing to account and to stand up for human dignity and freedom in the region and around the world,” Pelosi said in a statement after the administration of President Joe Biden announced a “diplomatic boycott” of the 2022 Olympics.

Shortly before the Games began, Pelosi warned athletes not to behave like she once did in Tiananmen Square and keep their criticisms of the regime to themselves.

“I would say to our athletes — you are there to compete,” Pelosi said. “Do not risk incurring the anger of the Chinese government because they are ruthless.”

Pelosi has not commented at press time on the subsequent revelation that Biden administration diplomats have applied for visas to attend the Olympics, contrary to the White House’s vow not to send official representation.

Red-Handed debuted at number one on the New York Times bestseller list on Wednesday, one week after its release by HarperCollins.