Alexandria Ocasio-Cortez is one of the best known members of Congress—and she hasn’t even been sworn in yet.

Her life story, her underdog-campaign story, her democratic-socialist story, and her social-media story have been told elsewhere.  So now let’s focus on what new proposals are likely to emerge once she actually takes her place in the 116th Congress. As we shall see, her policy ideas—and one in particular—could be vastly more consequential than her latest tweet or post.

The Next Big Thing?

As we know, Ocasio-Cortez has put forth many ideas, from “Medicare for All” to “Abolish ICE” to “Stop Amazon.”

Yet one of her ideas looms above all the others: a “Green New Deal.”

As Ocasio-Cortez said of her Green New Deal on December 3, “This is going to be the New Deal, the Great Society, the moonshot, the civil rights movement of our generation.” And she has already gathered a fair amount of support; at least two Senators, Bernie Sanders and Cory Booker, have endorsed her proposal, as have 35 Representatives—and well-funded grassroots activists are applying plenty of pressure to get more endorsements.

Yet there’s plenty of reason to think that Ocasio-Cortez’s idea has room to grow, and grow big. For instance, according to a new poll, 81 percent of Americans—and 92 percent of Democrats—either “strongly” or “somewhat” support the Green New Deal idea.  As Ocasio-Cortez, always looking to add social-media mojo to her efforts, tweeted with delight, “Turns out, everyday people like it when we fight for everyday people!”

Yet there’s still one big question about a Green New Deal: What is it?

That question is, to put it mildly, far from answered. And yet as Democratic ideas for a Green New Deal emerge, Republicans shouldn’t let themselves become smug,  presuming that they’ll be able just to snipe at it and defeat it.  Instead, the GOP would do well to think of a more potent response, namely, a better alternative.

What We Know So Far About the Green New Deal

On her campaign website, Ocasio-Cortez describes the Green New Deal as “A transformation that implements structural changes to our political and financial systems in order to alter the trajectory of our environment.” Okay, that doesn’t help much on specifics, even if it was good enough to help get her elected.

Since her election, Ocasio-Cortez has added some, if not many, details. She has released an outline of her idea, including seven bullet points on energy, of which the first one reads:

Of course, even here, there’s plenty of wiggle room; notably, the goal of “100% renewable sources” isn’t linked to a specific date or deadline. Yet at other times, Ocasio-Cortez has indicated that this 100-percent conversion can be accomplished by 2035, or even 2030.

Needless to say, these goals have received plenty of pushback; for instance, the Manhattan Institute’s Robert Bryce headlined his piece, “The numbers show we just can’t get to ‘100% renewable energy’ any decade soon.”

Without a doubt, the Ocasio-Cortez vision is bigger than just energy. For instance, another part of her document declares this:

The Plan for a Green New Deal (and the draft legislation) shall recognize that a national, industrial, economic mobilization of this scope and scale is a historic opportunity to virtually eliminate poverty in the United States and to make prosperity, wealth and economic security available to everyone participating in the transformation.

Indeed, if one digs down further, one finds specific shoutouts to “labor unions,” “tribal nations,” and to “universal health care programs.” In other words, “Medicare for All” is sandwiched in. And oh, by the way, at least one recent poll found that 70 percent of Americans support Medicare for everyone.

To be sure, there’s also plenty in the Ocasio-Cortez document that’s even further to the left, such as a seeming endorsement of a universal basic income. And of course, there’re also vows to overcome “deeply entrenched racial, regional and gender-based inequalities.”

So yeah, the Green New Deal is about more than just energy and the environment. And yet that’s why the Green New Deal has gained so much support, even fervor, on the left: because it’s being viewed as the vehicle on which to carry virtually every lefty agenda item.

In other words, the vast scope of its ambition, reaching far beyond mere green, is the key selling point—a feature, not a bug. In the words of veteran leftist Katrina vanden Heuvel, writing in The Washington Post, “A Green New Deal is both smart politics and smart policy, not to mention the only practical way at this late date to preserve a livable planet for our children.”

Further considering the politics of the issue, vanden Heuvel observes that the Trump administration, and/or the Republican-controlled Senate, will almost certainly reject Green New Deal legislation. And yet, she continues, “that would only put the GOP further on the wrong side of history and clarify voters’ choices for 2020.”

In other words, the Democrats want the fight now, and they don’t care if they lose in the short run. That is, they are thinking longer term.  They will use the upcoming session of Congress to tee up the Green New Deal, all the while hoping to hit a long drive in 2020—and enact their plan in 2021.

We might ask ourselves: Is this really such an unrealistic game plan for the Democrats? Yes, to be sure, many features of green ideology are deeply unpopular; this author has written, for example, about the unpopularity of new energy taxes.

Yet if the Democrats can be coy about their tax plans for the next couple of years, the voters might well go to the polls in 2020 not fully realizing all that the Democrats have in mind.

Moreover, a recent NBC/Wall Street Journal poll is ominous for Republicans: It finds that only 38 percent of Americans wish to see Donald Trump re-elected, compared to 52 percent who wish to see him defeated. If that poll is anywhere close to being accurate, and if the numbers don’t change, then the Democrats might well win, even in spite of the unpopular innards of their green policy.

About That Name “New Deal”

In Politico, an enthusiast for the Green New Deal, Michael Brenes, added some compelling historical perspective. As he put it, Ocasio-Cortez and her allies have made the unprecedented seem familiar, wedding the party’s successes of the 20th century to its future in the 21st. Indeed, they have aligned their agenda by name with a time when outsized aspirations for reform were commonplace in the Democratic Party.”

What Brenes is saying is that the Democrats are smart to wrap their new policy in the garb of old policy—“the successes of the 20th century”—namely, the New Deal. The New Deal, of course, serves as a catchall term for the domestic reforms of President Franklin D. Roosevelt in the 1930s.

So yes, the New Deal was a long time ago, and yet most people still see it in a positive light, albeit vaguely. So why shouldn’t Democrats make the most of it? It’s their legacy, after all, harkening back to the says when “outsized aspirations for reform” were popular.

Of course, there is another side to the story. We might consider that when FDR, having won the 1932 election in a landslide, was first inaugurated on March 4, 1933, the Depression was at its deepest; the unemployment rate stood at 25 percent. Eight years later, in 1941, when FDR was sworn in for his third term, the unemployment rate was down to 14 percent. To be sure, 14 percent is not great, but it’s a lot better than 25 percent. 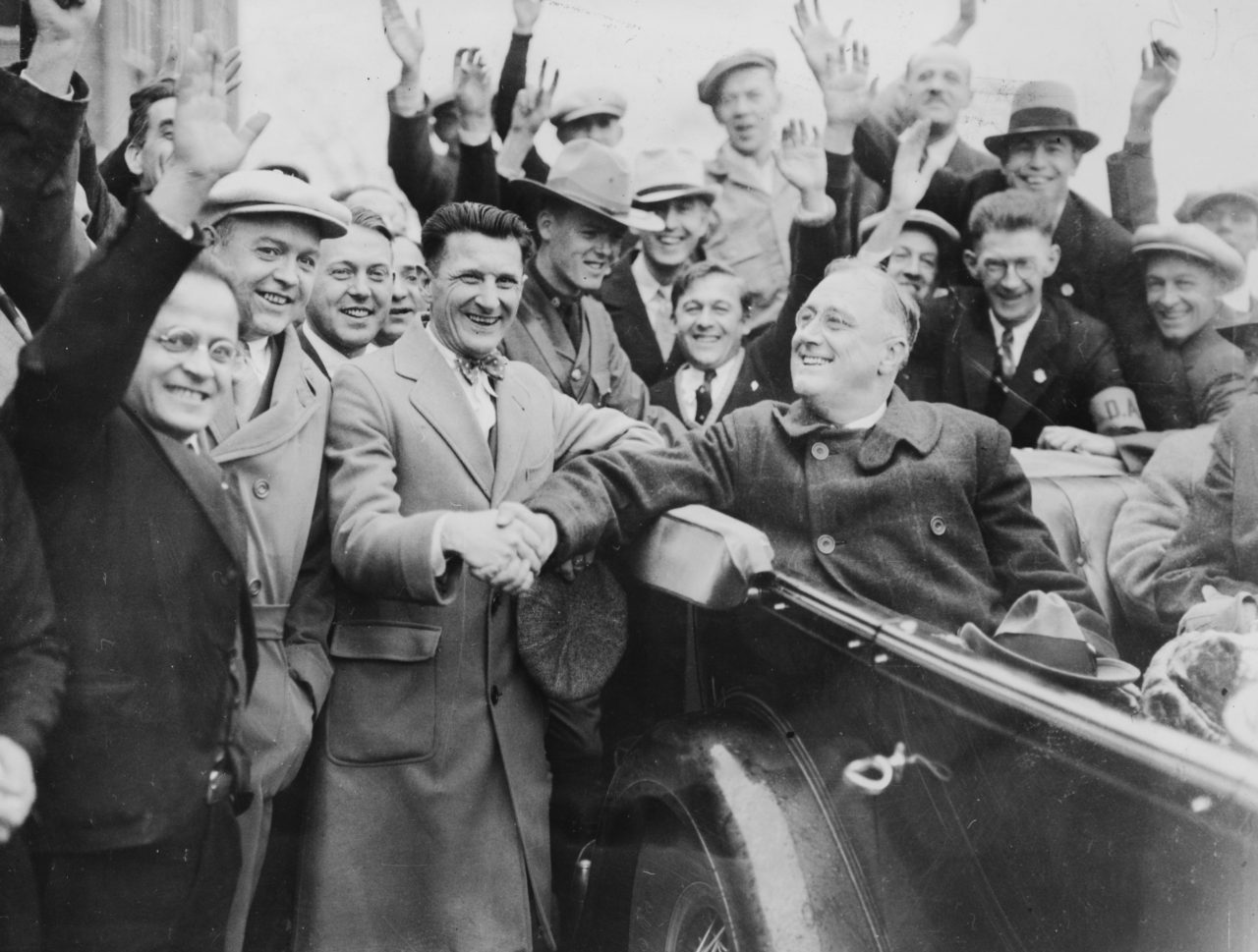 For perspective, we might note that FDR’s predecessor, Herbert Hoover, was on watch when unemployment rose to that 25 percent—up more than eight-fold in his single term. (Hoover also presided over a 30 percent contraction of the economy and a 90 percent plunge in the stock market.)

So by any economic reckoning, the New Deal was a huge improvement over the Hoover Deal.

Moreover, the real numbers for FDR were even better than the official statistics. In those days, people working in public jobs—everything from the Civilian Conservation Corps to the Works Progress Administration—were not counted as “employed.” So in fact, the real unemployment rate in 1940 was 10 percent. Once again, 10 percent is terribly high, and yet the key question in politics is always, “Compared to what?”

Furthermore, it’s important to remember that at the time, nobody really knew of a better approach than FDR’s. The opposition Republicans were still carrying a torch for Hoover—and the other major alternatives, communism and fascism, were, of course, infinitely worse.

To be sure, with the benefit of hindsight, it’s easy to see the flaws in the New Deal; for instance, too-high tax rates do have a way of stifling investment and encouraging the proliferation of tax shelters. And yet with hindsight, of course, just about everyone’s a genius.

So it’s with that in mind that we can cast a kinder eye on FDR, who strove to weave his way through the risks of potentially renewed Hooverism, to say nothing of Hitlerism and Stalinism.

Indeed, we might also recall that the contemporaneous judgment on the New Deal was overwhelmingly positive. The American voters, watching FDR in real time, applauded his actions. Two years into his presidency, in the 1934 midterm elections, the Democrats picked up an astounding nine seats in the U.S. Senate, and made gains in the House as well. No party, before or since, has done so well in a midterm.

Yes, one could make a crack about fooling all of the people some of the time, but that’s a harder argument to make as the election results pile up.

In 1936, FDR was re-elected in a landslide, carrying 46 of 48 states, and totting up 523 electoral votes. That year, a political cartoon in The New York Daily News, then the populist voice of the city’s working class, captured the spirit of the time.

Four years later, the New Deal streak continued. Running for a third term in 1940, FDR won 449 electoral votes. So the voters obviously liked what they were seeing.

(And while we’re at it, we might as well mention that in 1944, FDR was re-elected again, with 432 electoral votes; the success of the U.S. in World War II, militarily and also economically, took Roosevelt’s presidency to new heights of esteem and success.)

So if we believe in the concepts of democracy and popular sovereignty, then we have to believe that FDR and his New Deal were on the right track, at least relative to the available alternatives. It’s also worth mentioning that FDR ran particularly strong in what is, today, Trump country. For instance, not only did he carry South Carolina in all four of those elections, but he also did so with an average of 94 percent of the vote.

Okay, politics aside, what about the actual domestic policies of the New Deal? Over the last eight decades, much has changed, and yet a great many New Deal initiatives are still firmly in place, 13 presidents later, including Social Security, farm support payments, deposit insurance, and Wall Street regulation.  All these programs have their critics, of course, and yet darn few believe that they should be abolished or even radically altered.

So now we can see: When Ocasio-Cortez and the Democrats talk about a “Green New Deal,” they’re summoning up a powerful legacy of both politics and policy. To be sure, not everyone likes the Green New Deal, but as the polls show, as of today, more than four fifths of Americans are on board. And so the GOP isn’t likely to beat back the Green New Deal with policies that smack of neo-Hooverism.

So will such high poll numbers hold up for the Democrats? Is there thus a Green New Deal in our future?

We’ll take up those questions in future installments.

Next: The real story of the New Deal, and the surprising reality of who dislikes it the most—and what that means for the Green New Deal.