All Republicans opposed Stone-Manning, referencing numerous concerns about the nominee, including her involvement in a 1989 tree spiking crime, her past membership in the ecoterrorist group Earth First!, her controversial graduate thesis advocating for the use of population control propaganda, her support for extremist views on wildfire management and other environmental topics, and a suspicious loan she once took out while employed by the Senate.

Committee chair Sen. Joe Manchin (D-WV) led all ten committee Democrats in voting for Stone-Manning. The other nine who voted for her are:

In Manchin’s closing remarks, he acknowledged the meeting was one of the “more emotional” ones he has seen during his decade serving on the committee.

Republicans’ greatest objection, which was unanimous, was to the tree spiking operation, which Stone-Manning helped carry out 30 years ago by delivering a profane warning letter to the U.S. Forest Service on behalf of the lead tree spiker while she was a graduate student at the University of Montana in Missoula.

Manchin responded to that objection by pointing to the mostly younger staffers in the meeting. “Look around the room at all the youth we have here, all of the interns we have, all of our staff, look at the youth,” Manchin said. “Don’t look at us. Look at the youth, and I think about Tracy Stone-Manning as being a youthful sympathizer for the environment.”

Manchin added, “I kept thinking about my youthful, sympathetic views, and they’ve changed. I’ve changed a lot, but I haven’t been held accountable. I wasn’t prevented from being a senator because of it.” 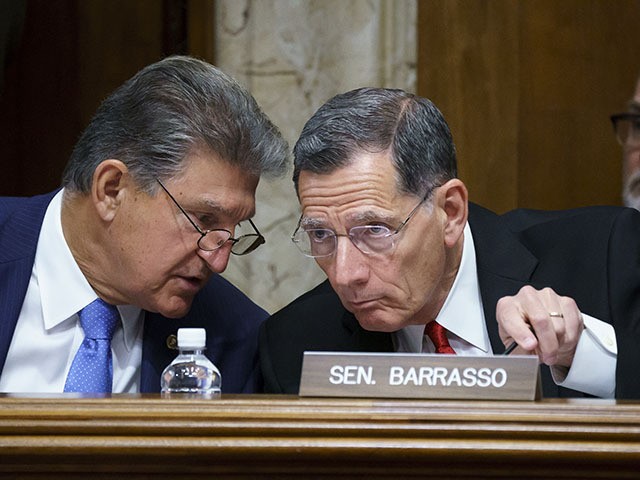 As Breitbart News reported on the tree spiking crime:

In 1989, Stone-Manning mailed a letter to the U.S. Forest Service on behalf of John P. Blount, an individual in her “circle of friends,” crudely warning federal authorities that trees in Idaho’s Clearwater National Forest that were scheduled to be cut down had been sabotaged with metal spikes to prevent them from being harvested.

After the Forest Service received the warning letter, Stone-Manning and six other individuals in Missoula were the target of a 1989 grand jury investigation for which they were subpoenaed and required to submit fingerprints and hair samples. However, the 1989 grand jury did not uncover enough evidence to charge Blount or anyone else with the crime. The case was not solved until Blount’s ex-[wife] reported him to authorities two years later, and in doing so, also named Stone-Manning as the person who mailed the letter for him. In exchange for immunity, Stone-Manning testified in the 1993 trial against Blount, who was convicted for the tree spiking crime and sentenced to 17 months in prison.

Stone-Manning later filled out a questionnaire for her Senate confirmation hearing with inaccuracies related to the tree spiking case.

Additionally, according to U.S. Forest Service special agent Michael Merkley who investigated her, Stone-Manning “was not only a member of Earth First!, but she played an active role in Earth First! hierarchy” and “wielded significant influence among its members.” Earth First! was listed by the FBI at that time as an organization linked to ecoterrorism, which the bureau identified as one of the top domestic terror threats.

In his letter to the Senate committee, Merkley wrote that Stone-Manning did not cooperate with the 1989 grand jury investigation or testify truthfully to the grand jury of her knowledge and role in the tree spiking. Merkley described her as “extremely difficult to work with; in fact, she was the nastiest of the suspects. She was vulgar, antagonistic, and extremely anti-government.”

The man convicted of the 1989 tree spiking crime, John P. Blount, has stated that Stone-Manning “knew about [the tree spiking plot] far in advance, a couple of months before we headed out.” She had actively agreed to mail the letter for him rather than go directly to the authorities with her knowledge of this crime.

In an op-ed for Breitbart News, William Perry Pendley, the head of the BLM under former President Donald Trump, wrote, “Before all her lies were exposed, Stone-Manning asserted that she did the right thing by mailing the letter as Blount requested. She did not do the right thing. The right thing would have been to contact the FBI or the U.S. Forest Service or the U.S. Attorney for Idaho.”

Committee ranking member Sen. John Barrasso (R-WY) summarized his objections to Stone-Manning in his closing statement during Thursday’s meeting, saying, “We’ve heard a lot today about how Tracy Stone-Manning is completely disqualified to lead the Bureau of Land Management.”

He reemphasized, “She sent the threatening letter to the U.S. Forest Service, she did not cooperate with federal investigators, only testified when she received immunity, and lied to our committee about it.”

He also noted the scale of BLM’s influence, which the agency primarily has over western states like his. BLM oversees 18 million acres of public land in Barrasso’s state of Wyoming. He observed the size was larger than the entirety of Manchin’s state of West Virginia. The BLM does not oversee any land in West Virginia.

Because the vote ended up being tied, the committee is unable to recommend Stone-Manning to the Senate. However, Senate Majority Leader Chuck Schumer (D-NY), through a procedural motion, can hold a vote to discharge the nomination out of the committee so that the full Senate can consider it.

Barrasso has said all 49 of his Republican colleagues are united in opposing Stone-Manning. Because the upper chamber is split 50–50, all 50 Democrats would therefore need to vote to confirm Stone-Manning, and Vice President Kamala Harris would then be responsible for casting the tiebreaking vote.