A doctor in British Columbia, Canada, recently diagnosed a woman as suffering from “climate change” after she developed breathing difficulties amid a summer heatwave in the western province, Euronews reported Wednesday.

Euronews described the unidentified woman as about 70 years old. She suffered from preexisting health conditions prior to her “climate change” diagnosis including “asthma, diabetes, and some heart failure.” The senior citizen’s living conditions may have contributed to her breathing difficulties, according to the news outlet, which noted that she resides “in a trailer” with poor ventilation and “no air conditioning.”

Dr. Kyle Merritt told Glacier Media he diagnosed the woman as suffering from “climate change” after treating her at an emergency room in Nelson, British Columbia, in late June for asthma-related symptoms.

“She has diabetes. She has some heart failure. … She lives in a trailer, no air conditioning,” he said.

The emergency room doctor recounted his initial medical assessment of the woman.

“All of her health problems have all been worsened. And she’s really struggling to stay hydrated,” he detailed.

Dr. Merritt’s decision to directly tie the Nelson resident’s breathing difficulties to “climate change” marks the first time the phenomenon “has been given as a cause of suffering by a medical professional,” according to Euronews.

“Like death by heat, doctors have traditionally struggled to clinically attribute mortality and severe illness to air pollution,” the Times Colonist observed on November 4.

“For Merritt, this summer’s wildfire season changed all that,” the newspaper revealed, noting the physician zeroed in on the smoke produced by wildfires in the region at the time to justify his clinical diagnosis of “climate change.” 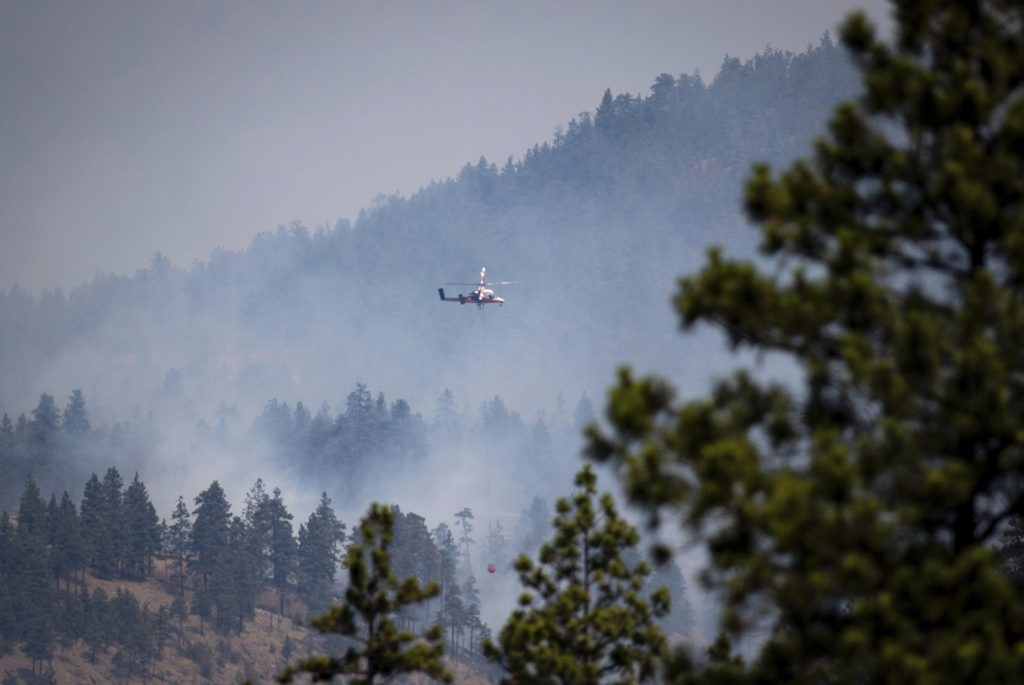 A helicopter pilot prepares to drop water on a wildfire burning in Lytton, B.C., on Friday, July 2, 2021. (Darryl Dyck/The Canadian Press via AP)

“When a patient came in struggling to breathe, Merritt knew the smoke — that hadn’t lifted from the region for days on end — had made a case of asthma worse,” the publication recalled.

“For the first time in his 10 years as a physician, the ER doctor picked up his patient’s chart and penned in the words ‘climate change,'” the Times Colonist detailed.

“If we’re not looking at the underlying cause, and we’re just treating the symptoms, we’re just going to keep falling further and further behind,” Dr. Merritt told Glacier Media. He did not disclose how he treated his first “climate change” patient for the symptoms she allegedly suffered in connection with the phenomenon.

British Columbia endured record-breaking temperatures from June through September that caused at least 209 wildfires. Provincial authorities ordered at least 243 properties to be evacuated in connection with the fires. The environmental changes caused the air quality in British Columbia to become 43 times worse than levels considered acceptable by the province during the months of July and August.

“Hundreds of people died as temperatures soared to nearly 50 C [122 degrees Fahrenheit] in June, a Canadian record,” Euronews recalled on Wednesday. “The province’s coroner ruled that 570 of those sudden fatalities were ‘heat-related.'”

Dr. Merritt’s “climate change” diagnosis over the summer has since inspired a separate group of British Columbia doctors to launch an initiative called “Doctors and Nurses for Planetary Health,” according to Britain’s Independent newspaper.

“Healthcare professionals are using the group to advocate for better health by protecting the environment,” the collective says on its website.

“We are deeply concerned about the climate crisis and its impact on health,” the group states.