Hundreds of Londoners, French nationals and journalists stood together for a silent vigil in memory of the people killed by Islamist terrorists in Paris today. The event in Trafalgar Square began with the singing of the French National Anthem, with the crowd then silently holding up pens and pencils to symbolise journalist and cartoonists.

The group had gathered at very short notice by posting messages on various social networking sites. At the last minute, it also became clear that two groups had both had the same idea and as a result some people arrived for a 6pm start and others at 7pm.

People spoke in both English and French, but both showed genuine emotion when the French National Anthem was sung. A large contingent of European journalists could identified by their Foreign Press badges, they both covered the event and paid their respects during the vigil.

Trafalgar Square has not always been the natural place for French patriots to meet, given that it is named after a naval defeat of the country. But today London is described as ‘France’s sixth largest City’ because it is home to so many French nationals that it would have the formal status if it was on French soil.

Despite the short notice many people came with signs, most of them read “Je Suis Charlie” which has trended on Twitter throughout the day. The meme began when it emerged the terrorists had shouted that they had “killed Charlie” before they fled the scene. This led supporters to use the hashtag #JeSuisCharlie to prove them wrong. 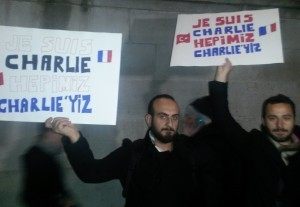 Aykut a Turkish national living in London had come to show his support for the French (pictured). He told Breitbart London: “I support freedom of speech, I think what happened today is unacceptable radicalism. It is the biggest problem in the world today, so it’s important we all stand against that.

“I am in favour of the printing of the Muhhamed cartoons, if you don’t like it don’t buy it.”

The vigil echoed the event that took place on Republic Square in Paris, which was also intended to show the terrorists that they would not defeat France.