Two of the three men believed to be involved in yesterday’s terrorist attack on the offices of the magazine Charlie Hebdo have been located in Northern France. They are reported to have robbed a petrol station near Villers-Cotteret in the northern Aisne region.

They held it up at gun point, stealing food and petrol, French media outlets are reporting they fired shots as they struck. The manager said he “recognised the two men suspected of having participated in the attack against Charlie Hebdo”. Helicopters are now circling a patch of land nearby, in what could be the final show down. 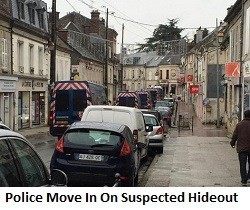 Last night Police announced they were looking for three suspects, Said Kouachi and Cherif Kouachi, who are brothers in their early 30 and their brother-in-law 18-year-old Hamyd Mourad. The group appear to have split up as Mr Mourad has already handed himself in to police, whilst the security services are searching for the Kouachi’s.

The Paris prosecutor’s office said Mourad turned himself in at a police station in Charleville-Mezieres, near the Belgium border. It is believed his motivation was that his name was in the public domain.

According to media reports, the pair were found driving in the direction of Paris in a white Renault Clio. They reportedly were wearing masks and rain coats, and their weapons were visible from the back of the vehicle. They had earrlier been identified as suspects because one of them had left his identity card in the getaway vehicle.

The younger Kouachi had been sentenced to 18 months of prison in 2008 after trying to leave to join Muslim fighters battling in Iraq. Associated Press reporters who covered the trial, which exposed a recruiting pipeline for Islamic holy war in a rough multiethnic and working-class neighborhood of northeastern Paris, recalled a skinny young defendant who appeared very nervous in court.

The brothers are believed to be French nationals of Algerian descent. The authorities have raided several properties and have arrested a number of their known associates. Police activity centred on Reims and was led by the elite RAID anti-terror squad.

This story is developing. Additional reporting from Associated Press.