Falkland Islanders have responded to threat of invasion from Argentina by plastering their cars with Top Gear themed stickers. The union flag sticker says “H982 FKL” and “British Forever”, a reference to the car number plate that landed Jeremy Clarkson in hot water during the filming of the last Top Gear Christmas Special. 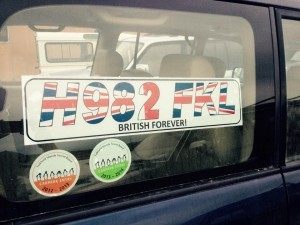 Argentine Falkland War veterans tried to attack the 54-year-old presenter as they claimed he had deliberately driven a Porche with the number plate around Patagonia to offend them. They believe the first half of the plate was a reference to 1982, the year of the war and the second half was an abreviation for Falklands.

At first they claimed the number plate had been chosen deliberately, but it later emerged H982 FKL was the car’s original plate. This led the Argentines to claim he had deliberately chosen the car to offend them, a claim Clarkson strongly denies.

Whatever the truth all three Top Gear presenters had to be flown out of Argentina for their own safety without completing the filming.

If the Top Gear crew were rattled by the anger of the Argentine Veterans then the Falkland Islanders have no such reservations. They are now using the registration plate as a car sticker, in move that will further anger Buenos Aires. 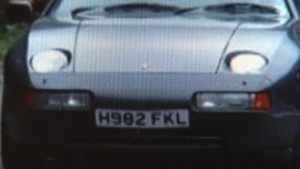 As reported yesterday on Breitbart London the Falklands are on their highest alert for 20 years as President Cristina Kirchner comes to the end of her second term of office. She has been accused of using the dispute to deflect her own internal political problems, and allegations of corruption.

Hundreds of British soliders are being sent to the Falklands in the hope of training them to deal with any Argentine invasion. There are very real concerns the British could not retake the islands without an Aircraft Carrier, which the Royal Navy will not have until HMS Queen Elizabeth is fully operational in 2020.

Some of the soldiers arriving in Port Stanley have posted the photos of the registration plate car sticker on Social Media. It is hoped a total of 1000 will visit the islands by November.