Asghar Bukhari, founder of the Muslim Public Affairs Committee UK, has denied subjecting British journalist Douglas Murray to a string of homophobic insults from a pseudonymous Twitter account. The account, @eastlondoner786, called Murray a “bum bandit” and “coward gay prik” who “hides behind his screen… must be a homo fing.” It also sent him a message reading “gays spread aids.”

With a string of abusive, poorly-spelled messages, which include remarks such as “this country went downhill as soon as bum bundits where allowed a say” and “i think msot people hate guys its only normal too. i bet if uk did a anoymonous poll 99% will agree its disgusting. i do,” the anonymous account has been taunting Murray since December 2014.

A tipster told Breitbart News last week that longtime Murray antagonist Bukhari was behind @eastlondoner786. The account, in common with Asghar Bukhari, loathes Murray to the point of obsession and is foul-mouthed and abusive to its interlocutors, including historian Tom Holland, to whom the account wrote: “Rich coming from scum who fink being gay is NORMAL.”

It equates Zionism with Nazism, as Bukhari does, uses the phrase “Israhell,” as Bukhari has before on Twitter, identifies itself as being from east London, as Bukhari is, and has tweeted Bukhari’s articles a number of times. The account does little besides tormenting Murray and a few other figure such as the Quilliam Foundation’s Maajid Nawaz.

To Nawaz the account wrote: “stop playing around and just admit your no longer a muslim we all know it. dont be afraid noone will kil you ur in the uk.”

Asghar Bukhari’s own Twitter postings can be highly controversial and offensive, but, while his account expresses near identical views to @eastlondoner786, it stops short of the homophobic abuse hurled at Murray since December by the anonymous account. Writing under a false name on the internet is known as “sockpuppeting.” 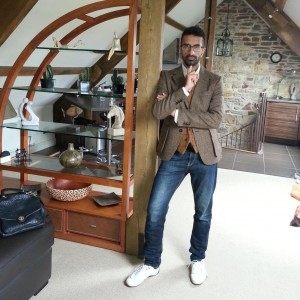 If it is indeed Bukhari behind the troll, this would not be the first time the Muslim leader has been in trouble for bigotry. In 2006, he sent notorious Holocaust-denying historian David Irving a letter and a cheque for £60, prompting allegations of antisemitism. Bukhari later claimed he did not know Irving was an antisemite.

Bukhari wrote on his Facebook wall that any Muslim killed fighting Israel goes to paradise, comments he stood by when contacted by the Telegraph. His status update ended with the words: “There is no greater oppressor on this earth than the Zionists, who murder little children for sport.”

Bukhari’s organisation, MPACUK, has been no-platformed by the National Union of Students for publishing “Zionist conspiracy theories” and the Community Security Trust has criticised it for using “material taken from neo-Nazi, white nationalist, and Holocaust denial websites.”

He has also appeared on British television defending the killers of Drummer Lee Rigby.

When asked for comment over the telephone, Asghar Bukhari paused before launching into an angry, profanity-laden denial, asking: “Do you dress up in ladies’ underwear? Ask me a serious question.” Bukhari announced his intention to record the rest of the conversation and “publish it on YouTube,” at which point Breitbart News terminated the call.