The Labour Party under Ed Miliband has long trumpeted its support for the cause of Palestine, but it denies any connections with Hamas. However, documents seen by Breitbart London show just how close the two have become in recent years, despite the public denials. 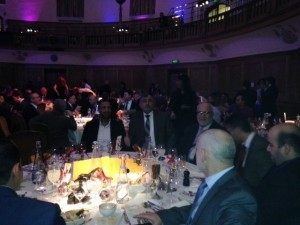 Members of the PRC at the dinner.

The connection is through a group called the Palestinian Return Centre (PRC) which has donated money to a Labour MP, and even sponsored a dinner with Ed Miliband . The PRC has been accused by the Israeli government of being the European branch of Hamas.

Despite concerns about its links to the terror group it was still allowed to pay £2,000 to sponsor a dinner with Ed Miliband. The dinner was attended by the de facto Palestinian Ambassador to the UK, Dr. Manuel Hassasian, along with the chairman of the PRC, Majed Al Zeer.

Information about the dinner was posted on the PRC’s website along with a photo of Ed Miliband speaking. It was posted in the “Lobbying and delegations” section of the website.

The dinner was organised by Labour Friends of Palestine, and the payment of £2,000 handed over by the PRC included a table at the event and sponsorship of it. But the connections between Labour and the PRC do not stop at sponsoring a dinner with Miliband. They also made a financial donation to veteran Labour MP Jeremy Corbyn.

The donation of £1300 was used to pay for Mr Corbyn’s visit to Iraqi and Palestinian refugee camps in Syria in 2009. Whilst the donation was declared and MPs have the right to use sponsors to fund overseas visits it does show how close the PRC is to Labour.

The PRC also has close links with the Muslim Brotherhood, through its UK division the Muslim Association of Britain (MAB), The MAB and the PRC share directors, although they remain separate organisations on paper. The connection was cited by Andrew Gilligan as an example of the relationship between Hamas and the Muslim Brotherhood in his investigations of the latter’s terrorist links.

The PRC denies being Hamas’ European branch but the Israeli government recently said their members are “senior Hamas leaders who promote the movement’s agenda in Europe”. They do admit to attending events were members of Hamas were also present, raising questions over whether they should be involved with Labour.

Last year the group publicly stated Labour was instrumental in the ongoing process of getting Palestine recognised as a country. In a parliamentary vote on the issue Ed Miliband put a three-line-whip on his MPs to support Palestinian recognition. The Conservatives allowed their MPs to make their own decision, but privately the leadership asked parliamentarians to boycott vote as it was not binding on the government.