An anti-fracking campaign has been condoning violence against academics who oppose their mantras. The ‘Fracademics’ campaign, supported by Vivienne Westwood, Joseph Corre and Lush, posted an image to their Facebook page of an academic having oil thrown in her face with the caption “We hope you get exactly what you deserve!” (h/t Bishop Hill) 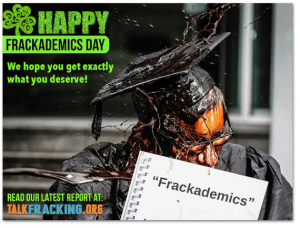 The campaign is run by anti-fracking group Talk Fracking, which has chosen to illustrate the report behind the Fracademics campaign on its website with a picture of a man doused in oil. Previous convictions for assault have been brought against people for throwing liquids over others, including water.

Fracademics is being financially supported by fashion designer Vivienne Westwood, her son Joseph Corre (owner of lingerie chain Agent Provocateur) and his humanist organisation Humanade, and the cosmetics company Lush. It is unclear how much money they have granted the campaign, which claims to draw links between the oil industry and academia by alleging that university professors are being bought off by the fracking industry.

Last December Westwood and Corre turned up at the gates of Downing Street with a box of asbestos as a ‘Christmas present’ for David Cameron, claiming that fracking was “the next asbestos” and that it harmed unborn children, a claim reiterated on the Talk Fracking website.

Corre told reporters: “This morning we have attempted to deliver a Christmas present to Mr. Cameron, which is a box of asbestos. This is because the government’s Chief Scientific Advisor Mr. Walport has advised that fracking could be the next asbestos or thalidomide. And we’ve delivered some independent medical reports to him and asked him to really look at those reports over the Christmas period, because they link very clearly the chemicals used in the fracking industry to some really horrible serious illnesses.”

Westwood added: “Will David Cameron listen to us? Well, he lost a child, he must have some sympathy. And he’s not connecting the dots. You are being lied to, all the time. And we are not lying. And it’s very, very important that the public take control of democracy.”

Westwood also delivered a letter signed by more than 150 supporters of the Talk Fracking campaign, billed on their website as “celebrities and experts”. The signatories are predominantly non-scientific. They include 95 people and organisations from the art world including Tracey Emin, Helena Bonham Carter, Russell Brand, Bill Bailey, Paloma Faith and Chryssie Hynde; a further nine from the fashion industry including Westwood and Lily Cole; three union general secretaries; eight from the food and restaurant industry, including River Cottage; and nine from the business world, including Corre, Lush, and Dale Vince, the wind farm millionaire.

The signatories called on the government to suspend fracking immediately, saying: “We know that this technology will not bring down fuel bills and will not create a jobs boom but it has the potential to leave a damaging environmental legacy for future generations.

“We need to talk about fracking. We the undersigned believe that the government must suspend fracking immediately while a genuinely independent, balanced and thorough public debate is held on the potential dangers this industry holds for the UK.”