Persecuted Christians in Lahore, Pakistan have been praying for election success in next month’s polls – for Nigel Farage and Ukip. Despite a British media narrative portraying Ukip as a party of bigots and racists, the congregation of Royal Disciple Church wants to see Ukip do well as it is the only party “standing up for Christians and the Commonwealth.”

The leader of Royal Disciple Church, Pastor Francis Bashir, who speaks Punjabi and a little English, reached out to Ukip member Sarinder Joshua Duroch, who converted to Catholicism from Sikhism, to tell him that he and his congregation “likes Ukip and are praying for your family, your country and your party Ukip.”

He added that he wants Ukip to win “because the party stands up for Christian culture and values and people from the Commonwealth.”

Pastor Bashir first heard of Ukip from an uncle who is a Christian pastor in India. He and his congregation have now made banner proclaiming their support for Ukip, posting pictures of the banner alongside the cross surrounded by the church’s congregation.

The large purple and yellow banner features a picture of Nigel Farage and photos of the church’s leaders, underneath scripture from the book of Jeremiah. The caption “God made you successful….Our prayers is with you to all members of UKIP(sic)” appears prominently.

Pakistan’s Christians are amongst the most persecuted in the world, living under constant fear of the country’s strict anti-blasphemy laws, which are often abused to settle scores and attack minority groups.

Last October, the Pakistani High Court upheld a death sentence for mother of five Asia Bibi, convicted under the blasphemy laws. In 2011, Punjab governor Salman Taseer and minorities minister Shahbaz Bhatti were assassinated after showing support for Asia; her famiy have gone into hiding, and her legal team face constant threat of attacks. 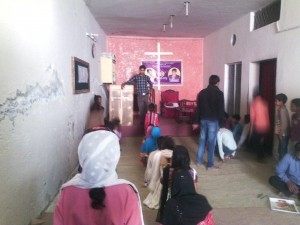 Pakistan’s Christians are amongst the most persecuted in the world. (Photo: Pastor Francis Bashir)

And last November, husband and wife Shahbaz Maseeh (26), and Shama Bibi (24) were brutally attacked and beaten by an angry mob before being burned alive in their kiln in Punjab province. Local police tried to save the couple but were beaten off by the mob.

Pastor Bashir said that he supported Ukip because they stand for fairness to people from across the world, and are willing to stand up for Britain’s sovereignty as a nation. He also welcomes the country’s pro-Commonwealth stance, and believes the party will help those in need in the UK.

Stressing the importance of standing up for one’s beliefs in the face of persecution, Pastor Bashir said that he is in awe of Mr Farage and believes that the party can foster good relations with Pakistan’s Christian population.

The Ukip leader has spoken on a number of occasions about the need to uphold Judeo-Christian values as the foundation for British culture. Following the murderous attacks by Islamic gunmen in Paris last January, Mr Farage told the European Parliament “We do have, I’m afraid, I’m sad to say, a fifth column that is living within our own countries, that is utterly opposed to our values. We’re going to have to be a lot braver and a lot more courageous in standing up for our Judeo-Christian culture.”

Commenting on the support shown by Royal Disciple Church, Mr Farage said he was “very touched by the prayers and support of the poor in Pakistan who has been heavily persecuted for their religious faith.”