Nigel Farage has told an audience at the BBC that UKIP would continue even if Eurosceptics lost the referendum. He said that he would “accept the result” if it was “free and fair” but confirmed that he did not believe losing would make the party redundant.

Mr Farage was facing his last major media hurdle before polling day on Thursday. The UKIP leader was questioned by an audience in Birmingham, in a broadcast that was shown shortly after the larger BBC Question Time debate.

When the UKIP leader was asked about the party’s views on a referendum he said: “We’ve had a variety of promises of referendums that have never been delivered. Labour regularly promise referendums, didn’t deliver them. 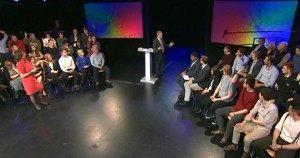 Farage faces an audience in Birmingham.

He continued: “I want that referendum conducted on full, free and fair terms. And what I mean by that is that both sides must have the same spending limits. The broadcasters must have an Ombudsman to make sure there is a proper, even debate and we must – and we must define who is qualified to vote in this referendum and who isn’t.

“And if it’s a full, free and fair referendum I will accept the result. Would it make UKIP redundant? No, because just look at what’s happened in Scotland. The Scots – the Scots rejected their independence referendum and yet the SNP have gone to remarkable heights since then.”

He went on to describe Europe as having been “hijacked” by the European Union that “now masquerades as being Europe”. Telling the audience he wanted to “amicably divorce” Britain from political union and instead “have a simple free trade agreement”. And that Brussels dislikes the way the “Anglo Saxon model” of free trade works.

Farage was asked to explain why he wanted to up spending on defence but cut overseas aid. He explained that trade tariffs from the EU prevent countries in Africa from selling goods in Europe and the payments to their governments were to placate them. He also repeated his previous comments that spending two percent of GDP on defence was similar to taking out “household insurance”.

He also had the opportunity to explain his views on Putin, telling the presenter: “I said I didn’t like him, I wouldn’t like to live in his country. Too many journalists go missing, but as an operator at least he revealed some of the truths that stopped us getting involved in yet another war in Syria.”

The debate was generally good natured, in contrast to some of the more shouty events Farage has spoken to in the past. However, this did not prevent Paul Nuttall MEP complaining bitterly that his boss had not been invited to the BBC Leaders’ Question Time event in Leeds.

He said: “The BBC showed it was made of jelly by letting Cameron wriggle out of facing UKIP.”