David Cameron has themed his first Queen’s Speech since the election around the left-wing clarion call of “One Nation”.

The term was first coined by Benjamin Disraeli and has been used by every paternalistic “moderate” Tory prime minister since. It was even used as the slogan for Ed Miliband’s 2015 general election campaign, despite him being one of the most left-wing Labour leaders in years.

The 62nd speech made by Queen Elizabeth II in her 63-year-reign began as a disappointment when the government u-turned on their pre-election pledge to repeal the Human Rights Act.

Despite dropping the bill the Prime Minister nonetheless took a copy of the Conservative Manifesto to the meeting of the 1922 Committee and waved it around. He had already described the majority Tory government as a “clear mandate to deliver on our manifesto”. 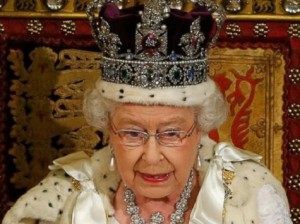 Queen Elizabeth embarks on her 62nd address to parliament.

The central theme of day’s Queen’s Speech was the referendum on Britain’s membership of the EU. The full bill will be published tomorrow with all eyes on the question that will appear on the ballot paper.

The question in last year’s Scottish referendum was “Should Scotland be an independent country?” leading euro-sceptics to demand British voters be asked something equally positive about the UK becoming independent of the EU. There are fears that the question will invite people to vote against EU membership rather than in favour of independence.

David Cameron is also facing pressure from the right of his party over the array of measures he is offering to the devolved assemblies. Despite winning the Scottish referendum the separatists over the border will be handed yet more powers over welfare and taxation.

Before the election the Prime Minister claimed losing the Liberal Democrats from government would enable the Conservatives to be bold. There are now widespread concerns in Westminster that this “one nation” Queen’s Speech will be as bold as Cameron is ever willing to be.

Other key legislation in the Queen’s Speech includes: