Ten members of the “Gypsy community” were arrested in Paris this week, after police blew open a major pickpocket operation around France’s best known tourist destinations.

French police report the gang had been employing sophisticated tactics to rob tourists for two years, with the 10 members of the gang netting a remarkable €4,000 a day each during tourist season. French newspaper Le Figaro outlines the police report into the methods employed by the gang, which specifically targeted Asian tourists, for being perceived as liable to carry large amounts of cash.

Dressing themselves as tourists with “hats and bum bags” to evade detection, the gang would distract victims by posing for selfies, or by blocking the way on the narrow walkways of the Eiffel Tower, while two more gang members stole money and escaped. The gang spent €100,000 a year on living in quality hotels, and travelled everywhere by taxi – but sent the bulk of the money home to their masters in Romania, where it was used to invest in property. 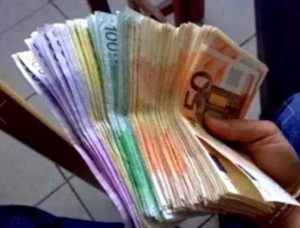 A spokesman for French police remarked on the complexity and size of the police operation to capture the thieves, which took seven months. He said: “There is a tremendous investigative work, as if you were investigating drug trafficking.

“To dismantle the network we had to identify the role of each in the gang. Stopping a pickpocket in the act is of little use, he will only continue after he is released… Pickpockets have replaced the robbers of the past. Gradually, they also amass substantial amounts of money”.

Remarkably, the gang were so confident of their success they even posted pictures of their exploits and spoils on social media, showing the young men and women holding vast bundles of money, and a Christmas tree festooned with high denomination notes.

The extraordinary scale of theft by Roma Gypsy gangs is not confined to Paris. The Daily Mail reported in 2013 that cash machine thefts in Britain had trebled since the previous year, with police intelligence suggesting that 90 per-cent of the perpetrators were ‘Romanian’ immigrants.

Theft is not by far the worst abuse being made common by the ease of movement afforded by the European Union’s open borders.

Breitbart London reported yesterday on the sickening trade in children and young women for cash, as Roma parents sell off their own offspring. Some, like the 11-year-old girl rescued by the Spanish government after her family sold her for ‘marriage’ to a man who repeatedly raped and beat the young girl, are sold within the Gypsy community.

Others, mainly young pregnant women with learning difficulties are sold by gangs to Asian and African men living in countries like Britain, so they can marry them and claim their European identity documents. Manchester police reported that by taking a pregnant wife, the immigrants would be able to burnish their own case to remain in the EU.