Like something out of sci-fi classic Attack Of The 50 Foot Woman, today an unsuspecting New York woke up to find a giant Protein World ad towering above the city’s Times Square neighbourhood.

The now infamous, “Are you beach body ready?” ad – that provoked outrage amongst the easily-offended in London last month – is back; only this time it’s bolder and as big as a skyscraper at 42nd Street between 7th and 8th Avenues. 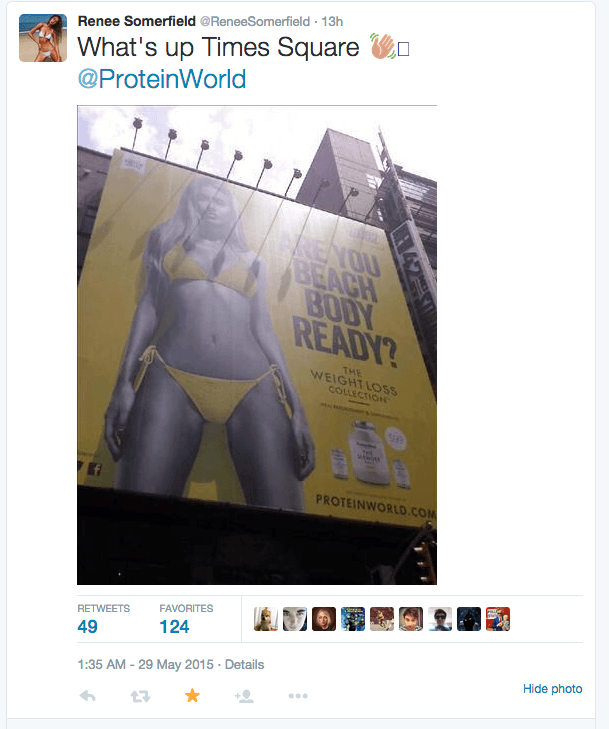 Renee Somerfield’s Tweet of the Billboard in Times Square

Three days ahead of its expected launch on Monday, in the early hours of this morning a picture of the ad was tweeted by its star, Australian supermodel with the teasing message: “What’s up Times Square”.

Below the ad, on the busy streets of Times Square, crowds of outraged Social Justice Warriors dropped their soya bean frappucinos – and beat a path to social media to begin another foam-flecked SJW crusade for “body-shaming justice”.

But some tweeters responded to Renee’s news with glee, and some twisted the knife further in the failed protestors’ guts, proclaiming “who else is ready for some feminist tears?”

The company’s outspoken marketing boss Richard Staveley told Breitbart London: “It’s a big middle finger to everybody who bothered to sign that stupid petition in the UK. It’s a fat F-U to them all. You could say that the London protestors helped pay for the New York campaign”.

Staveley is referring to the 71,000 protestors who signed a petition that attempted to take down the London ad creative from the Tube. The company claimed the furore helped boost sales by £2million with 30,000 extra customers in two weeks.

In New York, the Times Square poster is the centrepiece of a carpet-bomb campaign beginning Monday on the New York Subway that once again is attempting to turn “social justice” protest into sweet profits.

Make no mistake, there will be plenty of opportunities for the professionally outraged to vandalise the company’s posters in New York, as they did in London (although Protein World claimed most of the vandals’ efforts were fake, photoshopped efforts).

The action will centre on New York Subway’s Union Square station – the city’s fourth busiest Subway station – where the company have a “station domination” which is, in essence, a total takeover of every billboard in the busy travel hub.

As 35,677,468 passengers entered this station last year, it means almost 3 million New Yorkers and visitors are likely to encounter the ads at that station alone in the four weeks the campaign is to run.

Staveley added: “The campaign was meant to go live on Monday, but the billboard went up early yesterday, so we’re happy with that. The Times Square billboard will really ram it home. Then, from Monday, we’ve got ads booked on 50 per cent of all of the New York subway’s rolling stock. It will be an unmissable blanket coverage of Renee and yellow.

“The trains will be covered inside – ads above passenger’s heads and also on the train partitions.

“It’s designed to be a full-on onslaught. We also have digital billboards showing eight-second slots on every of New York subway entrance.

“We’ve spent £350,000 on it so far, around a 50 per cent increase on our London spend. Best of all, you could say that this campaign was paid for by the protestors in London.

“So we’ve got a ‘station domination’ at Union Square, we’ve got ‘brand trains’ where they literally coat the tubes in ads, digital billboards as you go into the subway and we’ve got the large billboard in Time Square.”

Now it remains to be seen: how will New Yorkers react? On the one hand, they are some of the most advertising saturated (and savvy) consumers on earth, and their cultural tolerance is legendary.

But on the other, the city is a renowned hotbed of left wing militancy, and, like any other Western metropolis, has more than its fair share of self-righteous, whiney liberals and local journalists and bloggers looking for a half-baked gender war.

Says Staveley: “New Yorkers have seen David Beckham and David Gandy in their underpants on skyscrapers, plus recently they had absolutely enormous adverts of Justin Beiber in his Calvins.

“While we can only hope that we get the backlash, I think people pay attention in New York without wanting to rampage, scream and shout and sign petitions.

“Having said that, we’re on standby to fly to New York. If we’re given the opportunity to go on Good Morning America then it’s not something we would turn down. We would head over straight away.”

If New York goes the way of London – and protestors boost coffers for the next campaign – where is the next stop for Protein World? The moon?