A large-scale brawl broke out today at a Labour Party-linked, Muslim community centre in Leeds in the northern of England.

The video (below), caught on a mobile phone before being uploaded to Facebook, depicted a violent scuffle between two warring sides of the Bangladeshi Community. Facebook users familiar with the situation claimed the row broke out due to ongoing tensions over who runs the centre, which has served as a hub of political activity for the local Labour Party as well as national Labour figures.

Local police were caught in the middle of the violence. The video shows chairs being hurled across the room, with police officers being tugged back and forth between those attempting to fight. At one point, a policeman is shown to punch one man in the face as he tries to wrestle his truncheon from him. 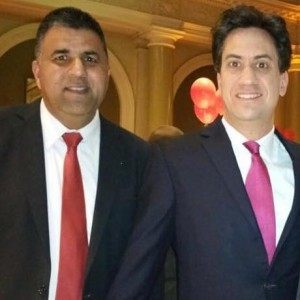 The Bangladeshi Community Centre is in the Roundhay Road in the Harehills area, just north-east of Leeds City Centre. It has been used as a congregating point for Palestinian activists, Labour Party officials, and the Islamic Relief charity, which has held a number of events in the building.

As has Cllr Ghulam Hussain, pictured (below right) with Labour’s acting leader Harriet Harman. The pair are key campaigners for the Leeds Labour Party, and between them have also been pictured with Labour’s new MPs for the area, as well as other high profile figures. It is not yet known whether the pair were present at today’s brawl.

In 2012, Islamic Relief used the community centre to host separate fundraising events for Syrian and Palestinian causes. Islamic Relief has been the subject of controversy around the world in recent years, with the Israeli and UAE governments both banning the organisation for its involvement with terrorism. Islamic Relief strongly denies these allegations, and claims that its own internal audit has cleared it of any wrongdoing.

Meanwhile, local police in Leeds are putting extra resources onto the streets of Harehills in order to reassure locals.

A statement from local police said: “Officers were called to the Bangladeshi Centre, Roundhay Road in Leeds around 12.30pm today following reports of a disturbance where it is believed four people have been injured.

“A number of arrests have been made and enquiries are ongoing as to the circumstances of the incident. Increased Neighbourhood Patrols will be in the area to reassure the local community.”

It is not the first time an altercation has occurred at the venue. In 2013, the Yorkshire Evening Post reports a fight on the morning of Eid celebrations.