The former First Sea Lord has said there are now “uncomfortable similarities” between today and the 1930s with Britain’s reluctance to arm itself adequately and get involved in confronting evil worldwide.

Retired Admiral Sir Nigel Essenhigh said heavy defence cuts made the UK look ‘feeble’ in the eyes of the rest of the world, and the weak or non-existent military campaigns staged by the UK in the Middle East and the rump Ukraine in the past couple of years amounted to appeasement.

Writing in the Sunday Telegraph and claiming to reflect the views of three of his former colleagues, Sir Nigel said, as with post-World War One Britain, there is little public appetite for more overseas military intervention. 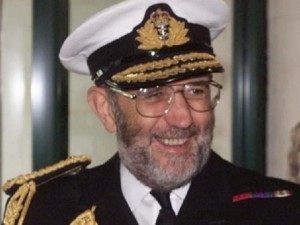 He said: “Thus there is cover for our recent, feeble responses to events in the Middle East such as in Libya, Syria and once again in Iraq, as well as in the face of the exponential threat posed by Islamic State.

“The situation in Yemen is also deteriorating in a dangerous manner.”

He added that Britain has “very real commitments” in the face of Russian action in Ukraine.

He said there are “disquieting parallels between the situation that confronted our country some 90 years ago and that which now prevails”.

Sir Nigel criticised references to defence in the recent Queen’s Speech, which he said had been kept to the end, as well as the Government’s failure to commit to meeting its Nato target of spending 2% of GDP on defence beyond this year.

The government has now embarked on the next Strategic Defence and Security Review (SDSR), a process formerly known as defence white papers, in which it will decide which military assets or programmes to cancel over the course of this government. The 2010 SDSR heralded the sudden disbandment of Britain’s maritime patrol aircraft, vertical-take-off Harrier assault fighters, and Britain’s last aircraft carrier.

Despite the grim precedent of past defence reviews, Sir Nigel warned that the SDSR should not be a “cuts exercise”.

“It (the defence budget) must demonstrate to potential enemies that Britain continues to be a country that will not be coerced into submission through military weakness when diplomacy fails in the future, as it did in the 30s,” he said.

The Press Association contributed to this report.