A Christian pastor from Northern Ireland is facing six months in prison for making “offensive” remarks about Islam. Yet the man pushing for his prosecution – who has used the controversy to leverage government into supplying land for a mega-mosque – has expressed sympathy for Islamic State (IS) and is left alone.

Mosul, where jihadists have murdered or expelled all of the city’s 2,000-year-old, 60,000-strong Christian community, is “the most peaceful city in the world” and “[IS is] less evil than the Iraqi government,” said Raied al-Wazzan, the executive director of the Belfast Islamic Center, which reported the pastor to the police.

Speaking live on BBC Radio Ulster’s Talkback show, he continued: “Islamic State came to protect a section of society that had been marginalised, and foreign policy had pushed part of society to reach this point.”

The police are not investigating his comments, and he has not resigned from his post with the Belfast Islamic Centre, which claims to speak for every one of the 4,000 Muslims thought to live in Belfast. A week later, however, he said his comment had “offended many people” and stated; “I condemn all kinds of violence.”

The controversy began back in May 2014, when pastor James McConnell, 78, gave a sermon where he described Islam as “heathen” and “satanic”. The sermon was live streamed online, and the police were contacted within a matter of hours.

Northern Ireland’s Public Prosecution Service has said in a press release that McConnell violated the 2003 Communications Act by “sending, or causing to be sent, by means of a public electronic communications network, a message or other matter that was grossly offensive.” The offence carries a sentence of up to six months.

Raied al-Wazzan had been leading the push to have McConnell prosecuted for a year before coming out as an IS sympathiser. “This is inflammatory language and it definitely is not acceptable,” he told the BBC back in May 2014. Adding that he would hold McConnell “responsible for any racial attacks on any Muslim in Northern Ireland.”

Two weeks later, in June 2014, McConnell responded with a statement apologising and clarifying that he does “not hate” Muslims, but defending his right to hold a view on their ideology. He wrote:

“My church funds medical care for 1,200 Muslim children in Kenya and Ethiopia. I’ve no hatred in my heart for Muslims… I believe in freedom of speech. I’m going to keep on preaching the gospel. I have nothing against Muslims, I have never hated Muslims, I have never hated anyone. But I am against what Muslims believe. They have the right to say what they believe in and I have a right to say what I believe.”

Around this time, in early June 2014, Raied al-Wazzan was using the publicity generated by the controversy to lobby for taxpayers money to be spent on land for a new mega-mosque. “It is a cultural centre that we are looking for and not just a mosque,” he said on local radio, adding in a statement: “We will provide the funds to build the cultural centre but we need the land from the government.” 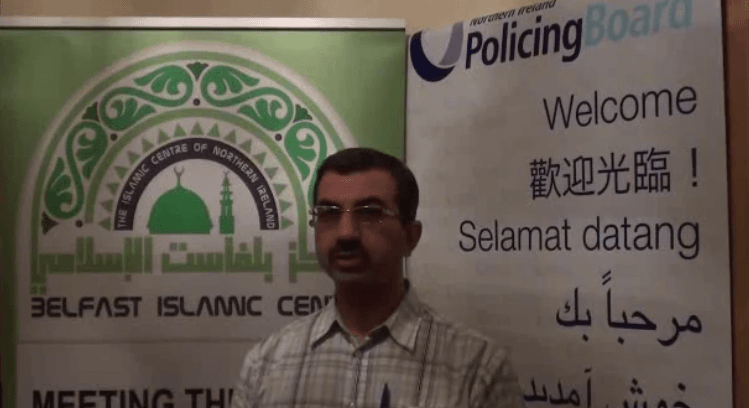 On the 10th of June 2014, Member of the Northern Ireland Assembly, Kieran McCarthy, called the original sermon by McConnell a “disgraceful diatribe of venom.” In response, Martin McGuinness, the Deputy First Minister of Ireland, commented that a new “Racial Equality Strategy for Northern Ireland,” which his office had been updating, is “long overdue,” and said the Muslim community “is entitled to a mosque, if a proper site can be found which is suitable for them.”

It is unclear at this point if al-Wazzan has lost the support of the Irish government for his mega-mosque, following his recent comments, but he certainly appears to have gotten off lightly compared to the pastor.

Undeterred, however, James McConnell is not a man who gives up lightly. He believes the charges brought against him are symbolic of the persecution Christians face in Britain today, and that he is fighting for a cause bigger than himself. He said in an interview with the Belfast Telegraph:

“I am 78 years of age and in ill health but jail knows no fear for me. They can lock me up with sex offenders, hoodlums and paramilitaries and I will do my time. I have no regrets about what I said. I do not hate Muslims, but I denounce Islam as a doctrine and I make no apologies for that. I will be pleading ‘not guilty’ when I stand in the dock in August.

“… It is a case of back to the future. In the first century, the apostles were jailed for preaching the gospel. Early Christians were boiled in oil, burnt at the stake and devoured by wild beasts. If they faced that and kept their faith, I can easily do six months in jail.”