The German city which dared to stand-up to their government’s policy of accepting Islamisation and mass migration appears to have been punished for dissent by the zero-notice imposition of a migrant camp.

Government employees stood by the entrance of a city park in Dresden, Saxony on Thursday night handing out fliers to passers-by informing them the next day the green space, which lies a short walk behind the city’s famous Semper Opera house was to be transformed into a ‘tent city’. In reality, a Breitbart source in the city said, the first most people knew about the plan was when a convoy of lorries and construction equipment rolled in to begin work hours later. 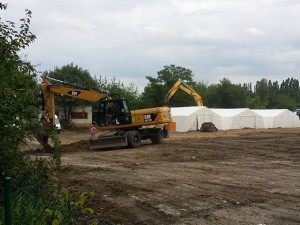 Bulldozers worked throughout the night to clear away grass and to pull up trees to make the park ready to receive the large white marquees provided by the German Red Cross to house some 1,100 refugees. That was the number, at least, that residents were given when the plans were announced. Within hours of the first migrants arriving on Saturday, the number the city-centre camp was expected to house had already been uprated to 2,000.

At the same time the gender and age makeup of the camp was announced, giving an interesting insight into the nature of ‘refugees’ to Europe and who they leave behind. Of those living in the tent city, 79.3-per-cent are men, 12.4-per-cent are women, and 8.3-per-cent are children.

A Dresden eyewitness told Breitbart the migrants had wasted absolutely no time in establishing themselves as black-market businessmen in the hitherto low-crime city. He said he had already been approached in the street by freshly arrived migrants offering to sell him drugs.

The zero-notice creation of migrant camps is now a common feature in certain parts of Europe, as governments have learnt giving notice and allowing locals chance to engage in the consultation process gives them time to organise and oppose. After all, where plans are made known in advance and the authorities take time making careful preparations for the arrival of immigrants, the buildings earmarked for them have a frustrating habit of mysteriously burning down.

In the first half of 2015 there have been 202 such attacks on refugee centres across Germany, more already than the whole of 2014, and six times as many as the whole of 2013, reports German paper Mopo24. 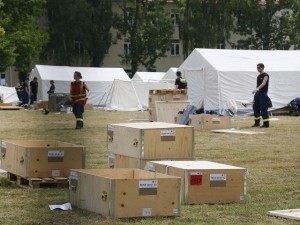 Not that such shock tactics have proven reliable in cowing locals into passive acceptance when town centre plots are unexpectedly turned into migrant centres. Breitbart London reported last week on the case of Freital, a small town in the vicinity of Dresden where a refugee centre was established earlier this year with no notice.

The ownership of a local hotel quietly changed hands and again the first residents knew of the plans to establish the centre was when the lorryloads of migrants drove in. The whole town is now under German police control which is martial law in all but name – officers can refuse entry to the town, and have set up an exclusion zone around the hotel. Locals now meet every night to protest, opposed by the police.

Dresden itself has been a marked target for left-wing activists and politicians since the city became last year the home of PEGIDA – the Patriotic Europeans Against the Islamisation of the West. The much maligned group has been meeting every Monday night in Dresden since Autumn 2014, to voice their opposition to a number of government policies, from the open-arms approach to migration, the Islamisation of Christian Europe, and the involvement of the German military in the Iraq-Syria conflict. 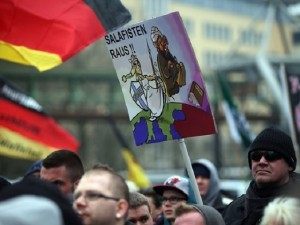 Although castigated as a rag-tag group of neo-Nazis and football hooligans, PEGIDA has consistently drawn a more peaceful crowd of professionals, families, and right-wing students. Despite that, German intellectuals have been left dumbfounded as to why East Germans would want to complain about mass migration at all, and that the feelings of this vocal group must be down to ignorance born of living in the least ethnically diverse part of the country.

To combat this ignorance, the logic goes, Dresden must be made more diverse. Major left-wing charity chairman and former STASI spy Anetta Kahane has already declared the East of Germany “too white”, and that if she could have any wish granted it would be to culturally ‘reconstruct’ the East.

Her comments were in response to remarks by the Green-party prime minister of German state Baden-Württemberg who said that the present formula of migrants being shared out equally should be modified to make less ethnically diverse East German states take more.

The first protest against the new Dresden camp took place on Friday night, as PEGIDA supporters and concerned residents clashed with left-wing ‘antis’ outside the camp. Deutsche Welle reports “sever people were hurt” and that stones and fireworks were thrown at the clash between the politically opposed groups, but did not reveal who threw them, or at who.