Just days after UKIP leader Nigel Farage called on the British Army to be deployed to help deal with the Calais migrant crisis, it has been revealed the government has indeed started drawing up plans to deploy the army to southern England.

However, despite concerns that the French authorities have ‘lost control’ over the situation across the English Channel where there are now routinely thousands of attempts to cross the tunnel every night, the army will not be deployed to the border. Instead, British troops will be used as highly-trained car parking attendants, opening up a variety of military bases and barracks along the south coast to overflow traffic from the blocked ferry and train terminals to reduce congestion on and around the M20 motorway. 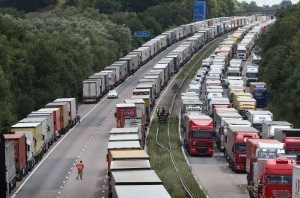 Trucks line up on the M20 during Operation Stack on July 30, 2015 near Ashford, England. (Peter Macdiarmid/Getty Images)

The Times reports the Royal Gurkha Rifles barracks at Folkstone, The Princess of Wales’s Royal Regiment in Canterbury, and the former RAF Manston on Thanet could be opened for the purpose. The large parade grounds and other expanses of paved or otherwise hardened ground make them ideal to store hundreds of HGV lorries waiting to board the Euro-tunnel shuttle trains to France.

Kent Police have been responding to the frequent tunnel closures and ferry delays over the course of this year by putting into action ‘Operation Stack’, which turns the arterial M20 motorway into a stationary lorry-park. As well as dramatically increasing congestion in neighbouring villages, it has also had a marked negative effect on the local economy, as businesses are rendered unable to send or receive deliveries, or receive customers.

Speaking on London Broadcasting Company radio on Tuesday night, UKIP leader Farage said the option to deploy the army should be on the table, as he described the situation in Calais as “scary” and “lawless”. He said:

“In all civil emergencies like this we have an army, we have a bit of a Territorial Army as well and we have a very, very overburdened police force and border agency.

“If in a crisis to make sure we’ve actually got the manpower to check lorries coming in, to stop people illegally coming to Britain, if in those circumstances we can use the army or other forces then why not.” 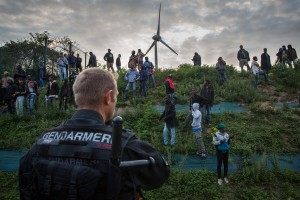 Farage’s view seems to have the support of some in the law-enforcement community. Writing in the Daily Telegraph, Surrey Police and Crime Commissioner Kevin Hurley calls for the army to be deployed to the railhead itself. He writes:

“My police officers are regularly called away from their jobs protecting the citizens of Surrey and sent to the M25 at Cobham services, where they have to run around mopping up hordes of illegal migrants. In the past few months alone, Surrey Police have caught 156 people piling out of lorries as their drivers stop for diesel or a coffee”

“These operations take out virtually half of Surrey’s 999 response capability and can tie up our nine prisoner vans for hours, as well the helicopter and all the dogs we can spare, to say nothing of jamming up the county’s cells. The migrants have become a serious threat to our residents: we can’t respond to their needs or patrol adequately.”

“Virtually no exports are now able to leave through our busiest port, they are stuck on the M20. Moreover, many businesses in Britain which depend on imports are at a standstill.”

“Would it really be that much trouble to mobilise [the army]? When it comes to enforcing the law, I suspect that Gurkhas might be made of slightly sterner stuff than gendarmes”.

Home Secretary Theresa May has admitted illegals are succeeding in crossing the English Channel by storming the Euro Tunnel terminal in France en-masse, but has refused to say exactly how many manage to cross this way.