Borders are being closed and major European Union (EU) treaties are being discarded as tens of thousands of migrants swarm across Europe, overwhelming national police forces in their wake.

Nations on the conveyor belt across Europe, from Serbia to Hungary, Austria, on through Germany and up to Sweden by way of Denmark have been recording record numbers of immigrants crossing their borders, all but unimpeded, over the past week. Just this morning EU member Hungary reported a new record, with 3,321 heading from Serbia – a non EU member – in the past 24 hours. The United Nations refugee agency estimates the week’s figure for ingress to Hungary along will top 42,000, almost as many as the whole of August.

Although Hungary is attempting to close the border with Serbia by building a wall and enacting new legislation to protect Europe, the country is not being thanked for its actions. Senior figures in the European Union have repeatedly expressed disapproval at the Hungarian prime minister’s move and British newspaper The Guardian asked this week ‘how does Europe solve a problem like Viktor Orbán?’, recalling how Angela Merkel once helped “topple” “problem figure” Italian PM Silvio Berlusconi. 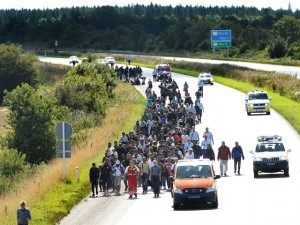 The Serbia-Hungary border was closed last week, and has been in a state of political flux since uncontrollable volumes of people walked the major M5 motorway between Serbian capital Belgrade and Hungarian capital Budapest. Dozens of major arterial routes have been closed across the continent since, as police have been forced to re-route legitimate traffic as the column of immigrants headed north.

After an easy passage through soft-touch Germany, trouble flares up again on the border with Denmark, and further at the Swedish border. The European Union’s Dublin agreement states that refugees are to be located in the EU nation they are first registered in, which in theory should be Hungary or Greece. But as overworked police forces become unable to process every individual, thousands are left to travel without official recognition at all until they reach Sweden and other honeypot nations, where they want to be registered for the more generous benefits and reunification rights.

Migrants are now reluctant to stay in Denmark after the new government introduced measures to make the nation less attractive to foreigners immediately after this year’s general election. Unemployment benefit was slashed by over 50 per cent to non-natives, replaced with a new integration benefit, with additional payments made once newcomers had learnt Danish.

With the Dublin agreement effectively suspended in many European nations, Sweden is becoming desperate to ensure migrants are registered anywhere else before they arrive there and become their legal responsibility. Thousands are consequently held in Denmark, where ‘refugees’ become economic migrants and plead with authorities to look away as they go on to their nation of choice.

These bottlenecks are causing significant trouble for European transport infrastructure. Major road and rail closures are now familiar to Britain and France, as migrants risk their lives to make it from France to the United Kingdom by way of the Channel Tunnel. But the immigrant blockage is now filtering back through Europe.

The border between Germany and Denmark was closed last night by Danish police as hundreds of migrants continued their foot journey north to Sweden, suspending the European Union’s ‘Schengen’ border-less zone. The Guardian reports Danish police instructed railway operators to stop all trains going between the two nations “until further notice”, with police physically stopping two trains at Rødby, Denmark, and stopping ferries crossing the Baltic.

Passport checks have been reconstituted on the Danish-German border, possibly for the first time since 2001.

Denmark wasn’t the only flashpoint last night. Austrian police were also forced to close a major motorway after a column of 800-strong immigrant column  “surprised” the force when they walked up the main motorway to Vienna from Budapest. Early reports said the police were monitoring the situation as they counted the illegal immigrants in, as a police spokesman remarked “We will wait and see what the situation is in the next few hours and tonight, if more people come. This is absolutely possible”. By the end of the night, a remarkable 3,000 had crossed into Vienna illegally, totally overwhelming police.

More than 1,700 crossed the border in just the three hours after midnight, reports TheLocal.at, with 2,800 now waiting at Nickelsdorf, a small town sitting immediately on the border.