STOCKHOLM, Sweden – In an exclusive interview, one of Sweden’s most high profile members of parliament talks politics, culture, and voluntary repatriation for migrants.

34-year-old Kent Ekeroth doesn’t look exactly like what you would expect of a senior member of a European political party. In a pressed polo shirt and smart jeans he looks like he would fit in more at a smart bar in central Stockholm than the grand parliamentary offices in the city’s historic old town. 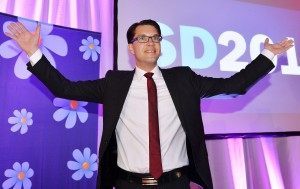 Sweden Democrats leader Jimmie Åkesson could head the largest party in the country after the next election, but the leaders of Sweden’s other parties are determined to keep him out of power / Getty

Yet despite his casual dress, Ekeroth is a dedicated politician and one of the most outspoken men in the country on key national issues like immigration, the rule of law, and the importance of European culture. As a member of the parliamentary justice committee, he has a unique insight into the reasons behind Sweden’s national decline, and clear views on what should be done to reverse it.

Starting on the subject of Sweden’s hardening reputation for being the rape capital of Europe and it’s declining reputation as a safe country, Ekeroth said it was good that people around the world were coming to know the uncomfortable truth about his country. When asked how Sweden had got to this stage, with the seemingly blithe acquiescence of the majority of its people, Kent was forthright. He told Breitbart London:

“This happened for one reason: immigration. People accuse the Sweden democrats of being a one issue party, but what they don’t realise is that everything comes back to this one issue. When it comes to criminality, economics, healthcare, schools, you name it.

“Hand grenades, rapes, violence, it all comes with immigration, to put it simply. It isn’t immigration from Norwegians or British people – it is from Middle Eastern and African Muslims.”

Ekeroth said the Swedish people had been lulled into a sense of false security by centuries of peace – unlike their neighbours they had not been occupied during the war, and until recently the people trusted the government unquestioningly to make the right decisions. But he said this was a situation now slowly changing: 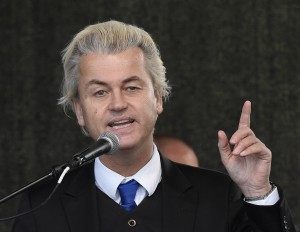 “This trust in Sweden is eroding. This trust goes away when you have a more multicultural society. Yet this trust made Swedish people very gullible to other cultures. We think everyone wants to be honest and live in a Western democracy, and that everyone aspires to the same values as we do. This naivety is fuelled by 1,000 years of a culture of trust in this country”.

Echoing the words of Dutch politician Geert Wilders, Ekeroth said the migration crisis was nothing short of an invasion, and one that was changing the face of Sweden for good: “Sweden will look less and less like Sweden. It will look more and more like Somalia, Iraq, or Afghanistan.

“We’re getting Islamised. We’re getting Arabised – and the media is very sensitive with this word, but that’s exactly what is happening. They are bringing their culture into Sweden, and it doesn’t go away just because they pass our border.

“When they get here, they are told ‘keep your culture’, not only that, but it is better than ours. Their population is growing, and we are seeing increasing white flight. It is going to change the country”.

Ekeroth is a great advocate for the diversity and richness of European culture, expressing admiration for Hungarian leader Viktor Orban for his fearless defence of European Christianity. Ekeroth said defending the common values that bind European peoples together mattered, and even though he isn’t religious himself, Christianity is an important part of that. 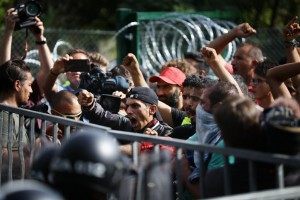 “When a Swede meets Italians, Spaniards, or Greeks, there is a commonality we have in Europe. The way we view states, right and wrong, crime and punishment, the way to organise societies.

“Europeans coming here have no problem adapting to Swedish culture, have no problem fitting in, and vice-versa. I have a great appreciation for the Balkan states, Serbians for instance. They know what Islam is and what it can do”.

To save Sweden Ekeroth said the country had to close its borders immediately, and investigate those who have recently been awarded citizenships for fraud – to discover if lying about where they came from and why. He also said the country should ban the building of further mosques, and encourage migrants to take advantage of assisted repatriations to their homelands:

“Sweden should increase the money people receive for returning to their own countries. And I mean to increase it a lot – at the moment it is hardly used. In my opinion, we should pay people thousands to go home. It’s cheaper for the Swedish taxpayer that way, and it is better for Sweden long term so we can live in a society in which we feel at home. It is worth it economically and socially”.

Whether Sweden will vote for these changes is yet to be seen. His Sweden Democrat party is surging in the polls, but the volatility of politics in the country makes coalitions a necessity to govern – and no other party is interested. Like many others, Ekeroth is looking east for inspiration:

“The eastern states are Europe’s hope. They are the ones standing against the left-wing liberalism – the EU tried to push it on them, to change them just like they changes Western Europe. But I hope they won’t change. I always feel this connection with other Europeans, and I want to help preserve these different but similar cultures in Europe”.