The Moscow Cathedral Mosque (pictured above) made of white and green granite from Canada and marble from Turkey boasts a golden dome three metres wider than St Peter’s Basilica, reports AsiaNews. Able to accommodate up to 10,000 worshipers, what has been billed as Europe’s largest mosque was built on the site of a previous mosque which was demolished on 11 September 2011. 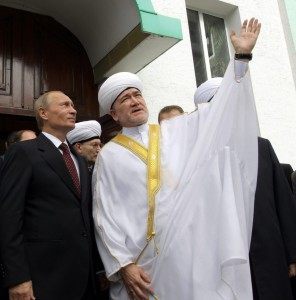 According to local media, reconstruction costs of US$170 million (£111 million) were met by donations, mostly from a Russian oil tycoon but also from Turkey and Kazakhstan. The Grand Mufti of Russia, Ravil Gaynutdin (pictured right with President Vladimir Putin), said about US$25,000 (£16,500) was provided by Palestine.

Both the Grand Mufti and President Putin attended the ceremony held on the eve of the Eid el Adha holiday. This Islamic festival, marking the end of the Hajj pilgrimage to Mecca, remembers Ibrahim’s willingness to sacrifice his son to God.

Both Erdogan and Abbas spoke, each using the event to criticise what they described as recent Israeli attacks on Palestinian worshipers, reports The New York Times.

Putin also spoke briefly, calling the mosque the biggest in Europe. He described it as a worthy addition to a capital and country built on the idea of uniting different nationalities and faiths.

Putin explained that the mosque is a central part of Russia’s ongoing efforts to develop its own Muslim education and training system to counteract Islamists seeking recruits, “a source for education, spreading humanist ideas and the true values of Islam.” He said:

“Terrorists from the so-called Islamic State actually cast a shadow on the great global religion of Islam. Their ideology is built on hate.”

Although no exact public numbers are available, Islam is believed to be the second-largest religion in Russia. The Muslim population of Moscow is estimated to be as high as two million, or about 16 per cent of the city’s 12.5 million population. That puts it just ahead of Paris as being Europe’s biggest Muslim capital (excluding Turkey).

The Grand Mufti believes every Moscow neighborhood should have one mosque, or 20 to 30 new ones, to replace an estimated 40 underground mosques working in apartments. This, he says, would counter Islamist recruitment that has resulted in 2,400 Russians fighting for the Islamic State – numbers reported last week by Sergei Smirnov, the deputy director of Russia’s Federal Security Service.