A suspected Islamic State sympathiser due to be expelled from Denmark has been arrested for trying to kill a police officer at the county’s largest asylum seeker centre. 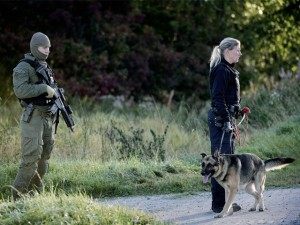 A policeman and a police woman take part in a search for a man who stabbed a policeman at the country’s largest reception centre for asylum seekers near Birkerod, Denmark, on September 29, 2015. (NILS MEILVANG/AFP/Getty Images).

As reported by Breitbart London, a Danish policeman was critically wounded yesterday after being stabbed several times at the country’s largest reception centre for asylum seekers. A suspect was arrested at the end of a manhunt around the former military barracks of Centre Sandholm (pictured right and above), which currently houses around 600 migrants.

The Local reports it has now emerged that a 25-year-old stateless Palestinian, thought to be an Islamic State sympathiser, is the only suspect.

Since July he was housed in Udrejsecenter Sjælsmark, a centre for rejected asylum seekers near to Copenhagen operated by the Danish Prison and Probation Service (Kriminalforsorgen). That facility is a few kilometres from Centre Sandholm.

The suspect had been subject to asylum system processes since 2013.  He was due to be sent away from Denmark having had his asylum claim turned down.

A statement from North Zealand Police explained: “Traces found in the investigation indicate that the arrested 25-year-old stateless Palestinian may be radicalised and have sympathy for the Islamic State.” The statement also said the attacker could be “psychologically unstable”.

The investigation is considering whether the incident followed a disrupted break-in, or if there were other motives behind the attack.

Police have said the stabbed 56-year-old officer’s condition has been upgraded to stable. The suspect’s preliminary court appearance is today.

Denmark is one of the countries bearing the brunt of the European migrant crisis. The Danish Immigration Service (Udlændingestyrelsen) reported that over the past three weeks around 100 asylum applications a day have been submitted.