Europe’s rushed acceptance of hundreds of thousands of migrants is turning many Britons against the European Union ahead of a vote on membership that Prime Minister David Cameron could call as early as March, a funder of the Out campaign said.

Arron Banks, a multi-millionaire British insurance tycoon who is bankrolling the Leave.EU campaign, said Cameron’s attempt to renegotiate Britain’s EU ties was doomed to failure and that events may prompt him to go for a referendum early.

Banks, once a Conservative Party donor who turned to fund the rival United Kingdom Independence Party (UKIP) last year after losing confidence in Cameron, said the EU’s handling of the Greek and migrant crises had alienated voters in Britain.

“It massively plays into our hands,” Banks, 49, said of the shift in British public opinion which he discerned from the migrant crisis. “It has suddenly seeped into our consciousness that we have completely open borders.”

If opinion is hardening against the EU, then it would increase the chances of a British exit, a move that would shake the Union to its core by shunting the bloc’s second largest economy away from a club it joined in 1973.

A survey by Ipsos MORI published on Sept. 30 showed 56 percent of the public mentioned immigration as among the most important issues facing Britain, the highest level of concern ever recorded by the pollster since the index started in 1974.

“If you have 600,000 EU migrant workers coming into the UK, how is there any room left for any refugees?” he said.

“Those migrants the Germans want to give citizenship to – where are they going to go? They will have European passports. And they speak English not German.”

Banks, an admirer of late Conservative leader Margaret Thatcher, is one of a group of millionaires – including fund manager Jim Mellon and property entrepreneur Richard Tice – who are financing what they hope will be the main ‘Out’ campaign.

Nigel Farage, the head of UKIP who has been a vocal critic of Britain’s immigration policy, threw his support behind Leave. EU last week.

At heart, Banks and his group view the European Union as a behemoth that has usurped national powers in the interests of major corporate and financial interests.

“The EU is about big politics, big business, big banks. It’s not about normal people,” Banks said. “The EU will break apart – our job is to knock the first brick out of the wall and hopefully we will then see the rest of it collapse.”

Banks disputes the view among big businesses and allies such as the United States that leaving the EU would torpedo Britain’s remaining global clout and take business away from London’s financial powerhouse.

“Our position is: ‘Look – get a divorce and the sun still comes up. Everything will work just as it did before and you then sit down with your partners for the real negotiation – on how we exit,” he said. “Why do we believe we’ve lost our national mojo?”

He said the euro, the world’s second most traded currency, would collapse – “when not if” – and that the scene of “Greece barbecued alive” had fuelled a sharp change of opinion among some to the left of the political spectrum in Britain.

“That was a big thing for the left – watching Greece being demolished by Germany. I think the pendulum of public opinion is swinging.” 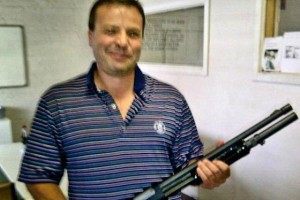 When asked about the idea that the integration of Western Europe following World War Two had prevented another conflict, he said: “Do you really think that everyone having a single currency means they are less likely to fight each other?”

So what does he say to the label of ‘Little Englander’?

“I call them little Europeans: We are looking to go global – our future is the world, not Europe.”

‘ABOVE HIS PAY GRADE’

Though Cameron is unlikely to set out what concessions he has won from other EU leaders until at least late December, both supporters and opponents of British membership are trying to build campaigns, attract financing and select leaders.

“Cameron is hopeless – he is going to get nothing,” Banks said, adding that the prime minister might seek to call the referendum in March – far earlier than most people think – as he risks being overtaken by events.

“Negotiating Britain’s relationship with Europe is above his pay grade and it is just not working.”

Cameron has said he is confident of being able to recommend Britain stays but he has also said he rules nothing out if he cannot get changes such as cutting benefits for EU migrants and safeguarding the interests of non-euro members like Britain.

Banks said the privileged backgrounds of Cameron and his heir apparent, finance George Osborne, would turn off many voters if, as expected, they eventually campaign to stay in.

“It would be a dream to face two toffs together,” he said, adding that there was little real emotional support for the European Union membership among most British voters.

Banks said the Leave campaign was way ahead of the main ‘In’ campaign which will be launched later this month.

Leave has hired Washington-based firm Goddard Gunster, a veteran adviser on referendums, to advise on campaign strategy and already has a regional call centre of 60 people working to bring over supporters.

“It can’t be won from SW1 and if we try to we will lose. So our position is lets have a people’s campaign,” he said, referring to the postal code for the traditional centre of British power, Whitehall and Westminster.

Banks refused to give exact details of the financing of the group: “This is the battle of Britain and you don’t worry about money when you are trying to get your country back.”