Begg, who was been arrested multiple times though never convicted on terror charges, has recently made headlines for his group praising ISIS terrorist Jihadi John as a “beautiful man”.

“This is a safe space,” were the opening words of last night’s Students Not Suspects event. “No one should feel offended, insulted or uncomfortable,” said the chairman, before pointing out the five “safe space officers” in the room and the “safe space hotline” which was available to call should anyone have their opinions challenged.

She then told the audience the event was about “protecting free speech.”

It was the first in a nationwide “Students Not Suspects” tour organised by NUS Black Students with CAGE. The two groups are co-ordinating with the aim of helping students and lecturers resist, protest and lobby against 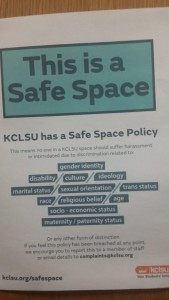 Section 26 of the Counter-Terrorism and Security Act 2015, better know as PREVENT, which compels teachers and some healthcare workers “to take due regard to preventing people being drawn into terrorism.”

“PREVENT,” said lawyer Rachel Harger, “institutionalises division… and is driven by Islamophobia.” She queried: “Why is it that 90 per cent of people effected by PREVENT are Muslim?”

She derided Charlie Hebdo – the French satirical magazine that saw its staff murdered by Islamic extremists – and compared the strategy to section 28; presumably, because it prohibits the promotion of terrorism in the same way that section 28 prohibited the promotion of homosexuality.

The crowd also heard a story from Mohammed Umar Farooq, a counter-terrorism student who was rather unfortunately accused of terrorism for reading books on the matter. His case, however, is widely viewed as an exception rather than being commonplace, but was held up as the rule for the rest of the evening.

The star speaker, Moazzam Begg, took to the stage to rapturous applause: “By his definition, David Cameron himself, who has not held anyone to account for those abuses [in Guantanamo Bay], is an extremist,” he said, “What of the ‘British value’ of the rule of law?”

“There have been numerous examples of people coming to my organisation, CAGE, about people… who just report others because they don’t want to fall foul of [PREVENT],” he claimed.

He said: “PREVENT has made us into something the communists rulers of East Germany would be proud of. People can spy on each other and point to those to their left and their right and say, ‘I don’t think they are adhering to my idea of British values.’”

He appeared to defend extremism by comparing it with the Suffragettes. His past confession of being an Al Qaeda recruiter is perhaps not what Emmeline Pankhurst was thinking of. Regardless, he asserted: “We know that, in the week that the film ‘Suffragette‘ has just been released, that radicalism is a good thing, right?

“Radicals fighting for the right to vote is a bad thing? Being radical is a bad thing – that is what deradicalisation programmes teach”.

Within this worldview, extremism today is comparable to the Suffragettes because Mr. Begg sees the cause of his pro-Jihadi John group as ‘liberation’:

“What is pushing people into extremism is that there is nowhere left to air, to argue and to channel your anger, your dismay and your sorrow at what you see on your TV screens happening in Palestine, Iraq and Syria,” he claimed.

It is perhaps this outlook that allows him and his organisation to find sympathy for Jihadi John, and call on people to “join the Jihad” in Iraq.

Around 75 students attended the event last night at UCL, with the series set to continue across the country despite a promise from the NUS not to work with CAGE.