The Hungarian border fence has been a remarkable success, according to new figures made public by Viktor Orban’s homeland security chief this week.

The new border fences, which closed off Hungary from Serbia in September and continued around the border, finally cutting the country off from unwanted incursions from Croatia earlier this month have been so successful the number of illegal migrants has dropped off the charts. 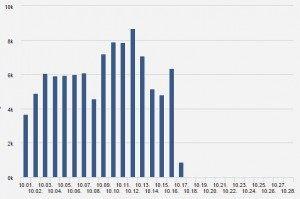 The miracle fence: Hungarian police figures for illegals arriving this month have been so low since the 18th, they no longer even figure on government charts / Police.hu

While last month up to 10,000 migrants a day illegally crossed into Hungary, now border controls have been fully implemented, that number has fallen to dozens per day. Dr. Gyorgy Bakondi, chief adviser for homeland security to prime minister Viktor Orban was on hand to give viewers of a popular Hungarian evening television chat show this week a low down of just how successful the fence had been last night.

Describing the sudden end of the migration crisis for Hungary as it rages in neighbouring nations who have decided to take no action to defend themselves Mr. Bakondi said illegal numbers were now well below those arriving in “peace time” — before the migrant criss began.

Reeling the latest statistics off, Mr. Bakondi told viewers that on Monday this week 12 illegals had crossed into Hungary, on Tuesday seven came, and on Wednesday the number was four, as of 6pm when the show started. He said even historically, these figures were “significantly small numbers”, reports popular conservative Hungarian newspaper Magyar Nemzet.

It wasn’t just the fence that allowed Hungary to control who came and went from the nation, said Mr. Bakondi, but it was a whole package of “border policing”, including the fence, the police and troops defending it, and effective law backing them up. This he called a “triple defence”. 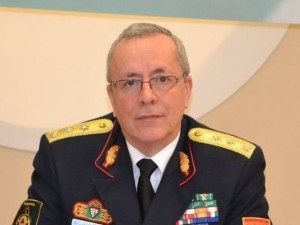 The sudden cut-off for migrants entering Hungary, going from 6,353 to 29 a day in just a week after completing the fence may offer some cheer to conservatives in other European nations who now have a stark example of how effective actually policing national borders can be.

It may have already triggered jealousy in some neighbouring nations. Austria, which until very recently was criticising Hungary’s approach to the migrant crisis in the strongest possible terms, with chancellor Werner Faymann making comparisons to the Nazis. Now, just weeks after Hungary’s fence investment started paying dividends, they have announced plans to build their own against Slovenia.

Mr. Bakondi’s Hungarian example comes as former Australian prime minister Tony Abbott ribbed European leaders for having no control over their borders, a feat he easily achieved in his home nation by simple policing and ‘turn backs’. Speaking at the Second Annual Margaret Thatcher Gala dinner in the City of London, Mr. Abbott told a crowd of Conservative Party MPs and supporters that:

“All countries that say ‘anyone who gets here can stay here’ are now in peril, given the scale of the population movements that are starting to be seen. There are tens, perhaps hundreds, of millions of people living in poverty and danger who might readily seek to enter a Western country if the opportunity is there.

“Who could blame them? Yet no country or continent can open its borders to all comers without fundamentally weakening itself. This is the risk countries of Europe now run through misguided altruism”.

Mr. Abbott told the crowd strong borders and a strong defence were key to a nation’s prosperity, and introducing border controls now were essential to ” prevent a tide of humanity surging through Europe and quite possibly changing it forever”.