As I noted yesterday, British Prime Minister David Cameron’s team clearly understands that the word “migrant” is going to play a proportionately massive part of the United Kingdom’s European Union Referendum campaign. Immigration is the top issue in the UK, and the phrase “benefits scroungers” has long become part of the cultural and political lexicon (whether we like it or not).

This is why Mr. Cameron deployed the point about migrant benefits in his letter to European Council President Donald Tusk yesterday.

That’s the response he’s hoping for from ordinary Britons concerned about immigration. 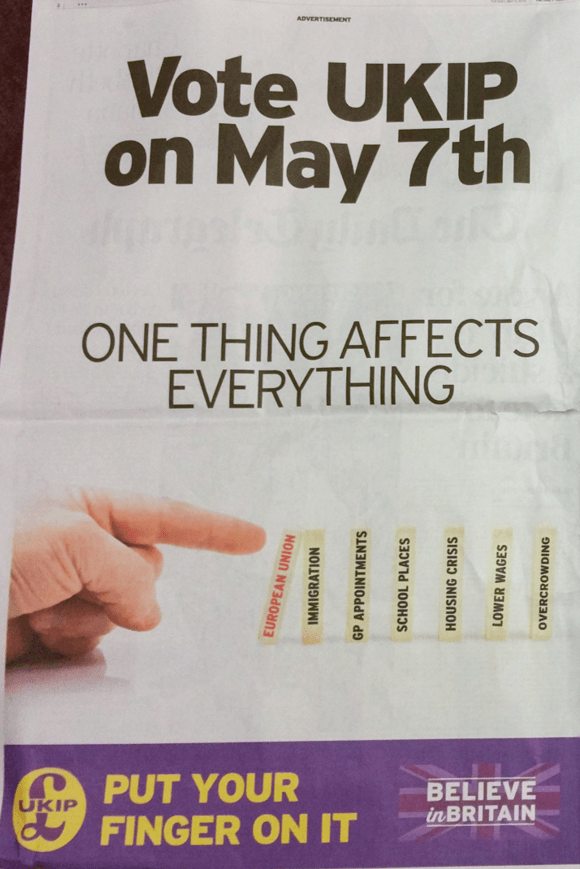 But we can’t allow ourselves, fellow Brexit campaigners, or indeed those on the fence to be swayed by this point in his renegotiation (I realise I’m preaching to the choir, but I need the choir to go and preach to the as yet unsaved).

Firstly, as pointed out by the wholly un-independent (more on that later) “independent” charity “Full Fact”, the Prime Minister has been a little vague with his claims that 43 per cent of EU migrants claim benefits of some kind in the first four years they are in the country. We’ll see if these are true or not as it becomes clear what methodology they’ve used.

But the real concern when it comes to immigration should be the sheer numbers coming into the country.

During the election campaign, while I was working for UKIP, I borrowed an idea found on Twitter (no, really, whoever did this, you’re a genius!). It shows (our version right, via the Telegraph) the domino, or knock-on effect of European Union membership.

“One this affects everything” it starts, before showing the domino of the European Union affecting immigration (open borders), GP appointments (overcrowding), school places (concentration of migrants), housing crisis (overcrowding), lower wages (wage compression) and, just in case you didn’t get it… overcrowding.

It’s a great piece of political advertising and it should be deployed repeatedly between now and the referendum campaign.

Because Mr. Cameron is trying to make the argument about something it’s not – migrant benefits – and my pollster sources are telling me that right now, the issue is polling higher as a public concern than border controls. This is a problem for the out campaign.

Imagine this: we remain in the European Union, and what Nigel Farage told me yesterday could happen, happens. Mr. Cameron’s demands are indeed handed to him over a lunch, albeit watered down.

So Britain no longer has to pay migrants benefits of any kind until they’ve been in the country, paying taxes for four years.

Do you think this deters anyone bar asylum seekers (who would be eligible for benefits from day one, anyway) from coming?

Do you think this lowers the 330,000 net migration figure?

Do you really believe that Romanians, Bulgarians, and others who earn £220 a month in their home countries, will be put off coming to the UK and repatriating the fruits of their wage-compressing labour?

I really don’t. I think that is an issue about equity. I back the policy, but not for the reason it’s being pushed. I back it because it’s only fair that people born and raised here whose parents, along with themselves, have paid into the system are treated better than people who have just arrived. Not all discriminatory principles are unjust.

So yes, it’s a good idea (in fact, it was FIVE years in the UKIP manifesto), but fixing it won’t be a reason or rationale to stay in the European Union.